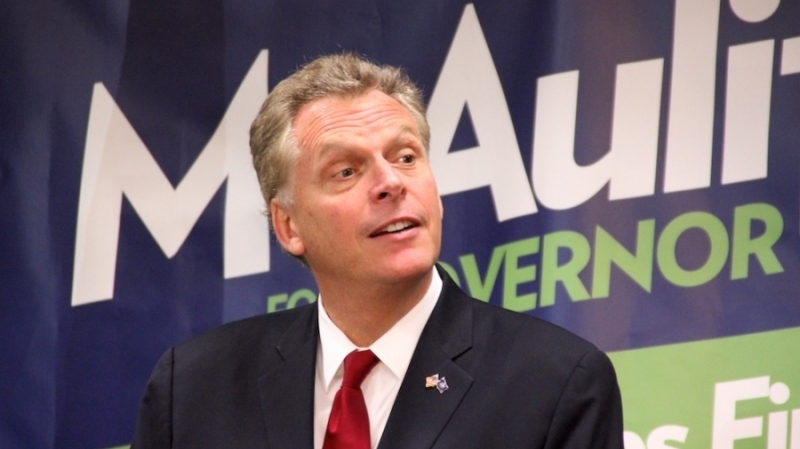 The Washington Post topped its "The Reliable Source" gossip column on Tuesday with "Yes, that was former Va. governor Terry McAuliffe in a 'Homeland' cameo." Emily Heil wrote in the paper "The HBO show [false! It's on Showtime!] filmed its seventh season in an around Richmond last year, thanks in part to McAuliffe's intense lobbying." McAuliffe praised actors: "These folks work very, very hard on all the details."

The Post doesn't work very hard on all the details. They found the space for Governor McAuliffe's bit part on a cable drama...but skipped the story a few weeks ago when his company GreenTech filed for bankruptcy. GreenTech died in darkness.

Becky Yerak at The Wall Street Journal managed to report the story on February 27:

GreenTech Automotive Inc., an electric car maker co-founded by former Virginia Gov. Terry McAuliffe, has filed for bankruptcy, seeking protection from creditors after having raised $141.5 million from hundreds of investors under a program allowing immigrants to qualify for permanent U.S. residency.

The car maker, which had a manufacturing plant in Mississippi but was based in northern Virginia, filed for chapter 11 protection Monday in U.S. Bankruptcy Court in Alexandria, Va.

Alexandria? You can't argue the Post couldn't nudge a reporter over the Potomac River to cover this story....especially when McAuliffe is "considering a run for president." Yerak described what sounds now like a scam:

A spokesperson for Mr. McAuliffe, who has strongly hinted that he is considering a run for president in 2020, said Tuesday the former Virginia governor and Democratic National Committee chairman “has not been affiliated with this company for many years and divested before he took office” in Virginia.

From 2009 to 2013, under Mr. McAuliffe’s chairmanship, GreenTech received $141.5 million from 283 individuals in the EB-5 program, which offers immigrant investors the chance to qualify for permanent U.S. residency by investing in efforts to create U.S. jobs.

The Richmond Times-Dispatch reported GreenTech blamed "a wave of negative coverage by a conservative news website for its financial woes," citing 76 articles by the conservative website Watchdog.org which it says “negatively affected governmental, investor and public perception of GreenTech” and prompted investigations by the Securities and Exchange Commission and the Department of Homeland Security. They added:

GreenTech in 2013 sued Watchdog.org, operated by the Franklin Center for Government and Public Integrity, for $85 million. A judge dismissed the case in 2014.

The Post last noticed GreenTech on November 29, 2017, tucked away on page B-4 in the Metro section under the headline "Lawsuit accuses McAuliffe of fraud."

RICHMOND - A group of Chinese investors has filed suit against Gov. Terry McAuliffe (D) and the electric-car company he helped found before taking office, claiming they were tricked into investing large sums of money and moving to the United States for an enterprise that has gone sour.

We noted that the Democrat paper did offer a few GreenTech reports during the 2013 campaign, but with bland headlines like “McAuliffe enterprise off to slow start.”