George Neumayr at The American Spectator made hay with the new House Intelligence Committee report that accuses former Director of National Intelligence James Clapper of leaking to CNN in January as CNN's Jake Tapper broke the story that senior intelligence officials briefed President Obama and President-elect Trump on the Christopher Steele "dossier." That would make sense...considering CNN is now paying Clapper to be a yapper to Tapper on TV. 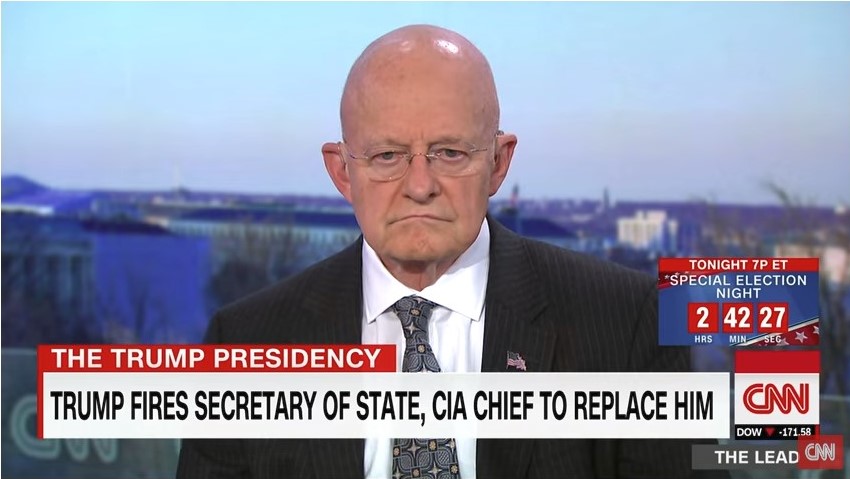 The late pundit Robert Novak used to say that government officials can choose to be either “a source or a target.” In other words, leak information to reporters and you can count on flattering coverage and protection from them. An added bonus to leaking, as former Intelligence Director Jim Clapper discovered, is that the network to which you are leaking will turn you into a paid contributor.

According to Congressman Jim Jordan, speaking to Fox News, “Clapper was actually the guy leaking information” to CNN about the presidential briefing on the Steele dossier that served as the pretext for the media feeding frenzy over possible Russian blackmail of Trump.

One can only laugh at the utter fraudulence of CNN: it pads its panels with government officials who leak to it, then presents them to its audience as “nonpartisan” experts commenting on the aftershocks of the very stories they leaked.

Trump’s intuition about a politicized intelligence community is confirmed daily by the rantings of its former members who treat the studios of television news like a retirement center. Eager to get in on this act, NBC recently hired former CIA director John Brennan, who also ingratiated himself to reporters through leaks. On his Twitter account, he describes himself as “nonpartisan” and NBC supports that con by letting him comment on the investigation his partisan manipulation of intelligence instigated.

Sara Carter made the point that Clapper denounced his own leak in a press release on January 11: “I expressed my profound dismay at the leaks that have been appearing in the press, and we both agreed that they are extremely corrosive and damaging to our national security.”

Now that Clapper's been exposed by the House Intelligence Committee, it's not at all surprising that Clapper is denouncing as "so partisan" it has "zero" credibility (wow, the chutzpah is amazing):

ANDERSON COOPER: I mean, do you think we can trust anything in the report?

CLAPPER: Well, unfortunately, and this is sad for me is that the credibility of the committee is basically about zero because they are so partisan. I have been around, Anderson, since those two committees were stood up. Let's say in 1976 and the Senate intelligence committee a year later.

So I've watched them over the years. And the only time the committees are effective is when they are bipartisan. And the House Intelligence Committee is paralyzed because of the partnership that is emerged over this and the politicization of intelligence which they are supposed to safeguard against.

COOPER: Director Clapper, I so gained some access to some raw intelligence tonight and I just want to wish you a very Happy Birthday today.