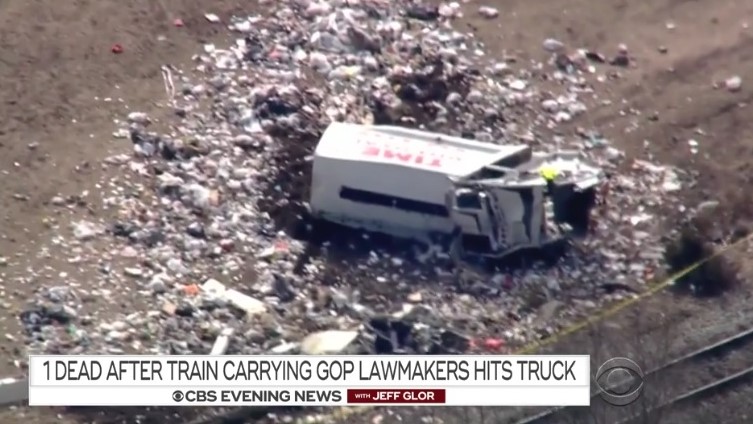 A garbage truck crashing into an Amtrak train loaded with Republican members of Congress headed to a retreat in West Virginia was not a laughing matter, with one fatality in the truck. But CNN failed to report a tweet from one of its contributors, Democratic/socialist strategist Jonathan Tasini (he boasts about being a "CNN talking head" on his Twitter page).

“Wow, btwn train full of Goopers hitting truck and this, God is working hard today to clean up the stink. Thank her. #TreyGowdy #goptrainwreck,” Tasini wrote in a now-deleted tweet referring to the train wreck and Trey Gowdy's retirement announcement.

Brian Flood of Fox News noted Tasini wrote a column for CNN.com on January 13. Flood also reported CNN presumably contacted Tasini because he quickly sent a follow-up tweet after several users tagged @CNN beneath his original tweet stating, “Let me save you time. I don't work for CNN. They don't pay me. They can't fire me. I apologized nonetheless.”

The company Twitter account @CNNPR tweeted: "For those asking, @jonathantasini is not a CNN contributor or employee."

A quick Nexis search showed no one in the Old Media, print or broadcast, reported on this tweet, even though they all specialize in outrageous tweets by the president...except Fox. Fox News at Night host Shannon Bream reported Wednesday on withdrawn tweets by Tasini and by William Kristol:

SHANNON BREAM: Not long after the crash, and prominent commentators took the social media with tweets it appears they may have later regret it. Jonathan Tasini is a Bernie Sanders surrogate who's written columns for CNN. And a tweet he later deleted, he said, "Wow. Between train full of Goopers, I think he meant GOP-ers there, hitting truck and this referring to Congressman Trey Gowdy's retirement. God is working hard today to clean up the stink. Thank her."

Republican commentator Bill Kristol tweeted, "Once we're sure everyone involved is OK, assuming they are, I hereby give permission to Twitter to indulge in all manner of GOP train wreck jokes. I do think that having the train hit, yes, a garbage truck, the script writers of 2018 jumps the shark. After it was revealed there was a fatality, Kristol also deleted that tweet.