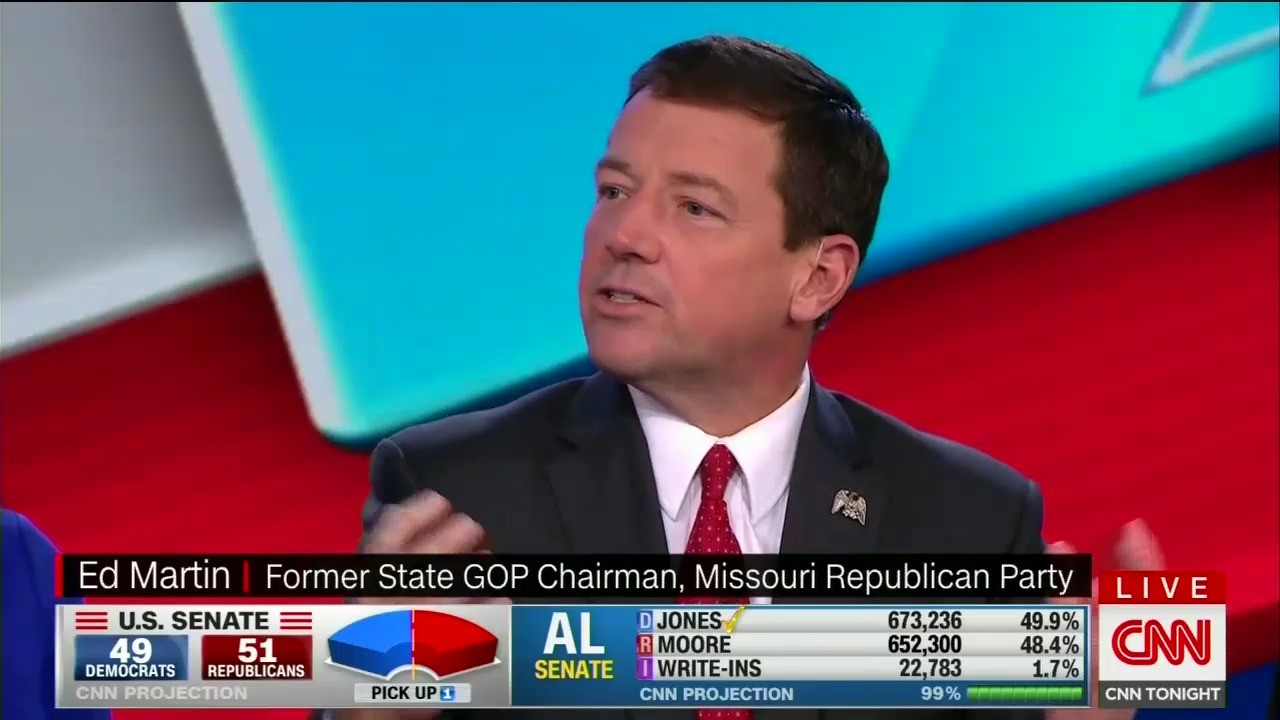 CNN is beginning to look like it can’t abide paying a CNN contributor for pro-Trump analysis. Ed Martin, the Missouri GOP official who replaced Jeffrey Lord as the channel’s die-hard Trump analyst, was dumped on Thursday after a brief four-month stint.

CNN confirmed the move to The Hollywood Reporter. Lord told them in September that Martin was a "smart guy" who will "go against the grain" on the air....and "After a while, it will add up and there will surely be those pushing to get rid of him."

"CNN terminated me today for cause," Martin said in an emailed response to the St. Louis Post-Dispatch Thursday night. "Strange since they told me my ratings were great."

In a subsequent email, Martin said the network didn't say why he was fired. He hasn't appeared on the network since mid-December, when, on his radio show after a contentious night at CNN after Roy Moore was defeated in the special election in Alabama, he referred to fellow panelists as "racists" and "black racists." That would appear to be Ana Navarro and Symone Sanders.

For her part, so-called "Republican" Navarro rejoiced in the firing on Twitter, and liberals replied by wishing all the other Trump defenders were removed, from Paris Dennard to Jason Miller to Jack Kingston: 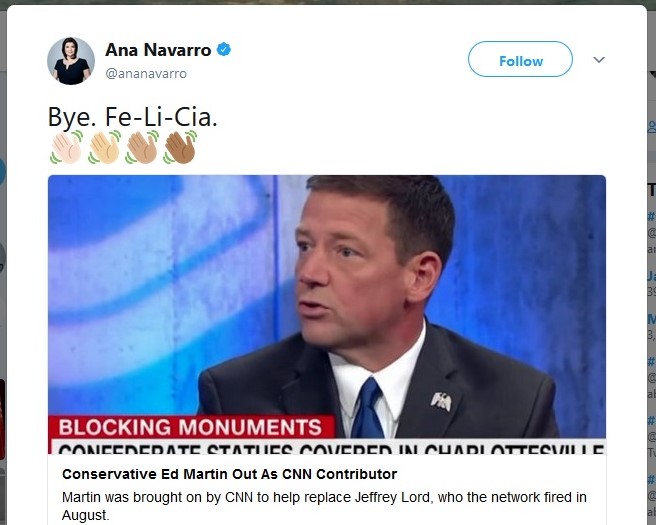 Leftist sites like Right Wing Watch oppose the very idea of a paid pro-Trump contributor slot at CNN. It's awfully difficult to work for CNN and defend Trump when CNN wages 24/7 war on Trump, asserting it's "Facts First," so anyone defending  Trump is apparently....Lies First? CNN loads the panels so that everyone mocks the Outlier...who they pay to be a target.

In a previous Post-Dispatch story, the paper revealed the strange life of a paid pro-Trump contributor. You have to "relish getting snarled at" to make a little money:

The happy warrior as always, Martin seems to relish getting snarled at by CNN stars like Cooper and Don Lemon and political luminaries who inhabit their shows. He tends to smile politely during verbal barrages on set, often coming from all directions...

Smiling through the political warfare, he says, has allowed him to stay on friendly terms with some of his tougher on-air critics. Cooper, who sometimes gets in Martin’s face during the show, is quiet and polite when the cameras are off, Martin says. Lemon, who once told Martin on air, “There’s no way on Earth you can believe 80 percent of the things you defend,” is engaging and funny backstage, according to Martin. Even former Clintonite Begala is “a very agreeable guy” once the smoke clears.

That sounds odd, but that's exactly what I found when I've been on set with Begala -- agreeable, until the "show" is on. Then it's combat.