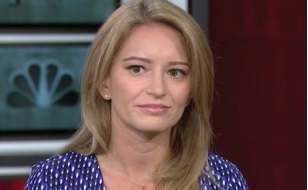 Pam Key at Breitbart reported that Friday on MSNBC, host Katy Tur said it was “laughable” that President Donald Trump had only had one solo press conference in his first year. “He’s been dodging questions from the press for months now, really. He hasn’t had a press conference since what, February?” she asked NBC’s Kristen Welker. “That is laughable. It’s laughable, Kris, that the president can’t stand in front of the press and take questions from the press.”

This is self-evidently untrue. Take this report from The Hill on October 16:

President Trump held a freewheeling press conference on Monday, in which he showcased his relationship with Senate Majority Leader Mitch McConnell (R-Ky.) and held court on a variety of subjects.

For 39 minutes at the White House, Trump addressed tensions with Republicans in Congress, ObamaCare, the Russia probe, U.S. soldiers who were killed in Niger, the opioid crisis, the NFL anthem protests and his 2016 opponent, Hillary Clinton.

Tur then admitted that Trump is sometimes accessible to questioners, just not in a formal setting. “Other presidents — I mean, he is accessible in the Oval Office, he’s accessible in these gaggles. He’s accessible when you shout questions to him on the White House lawn, yes. But a formal press conference, where you take multiple questions on a variety of topics, he has not done. It’s whatever news of the day when he feels like talking to reporters. That’s I guess a level of transparency if you want to argue it, but it’s not true transparency.”