Via Twitchy, we learned The Washington Post enjoys playing the game “Heads We Win, Tails You Lose” when anonymous sources lead journalists into looking stupid. The Post, among others, exposed how CNN reported an embarrassingly inaccurate story about Donald Trump Jr. and Wikileaks, using anonymous sources. When Trump Jr. responded by speculating on those sources, the Post wrote a snippy article (and tweets) on how Donald Jr. slammed CNN “without evidence.”

CNN should be the ones to be slammed about being sloppy with evidence. They were so eager for a scoop that they let an e-mail be described to them without seeing it. If that's one of CNN's usual editorial "procedures," you may want to turn the channel. 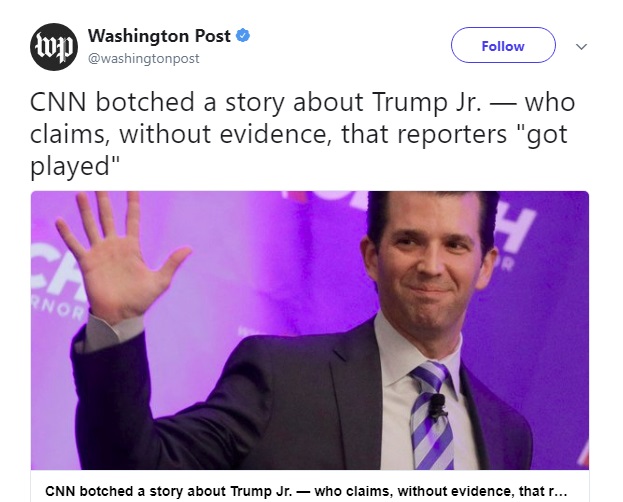 Trump Jr., who, like his father, is vocally partisan and highly critical of the mainstream media on Twitter, claimed — without evidence — that CNN reporters Manu Raju and Jeremy Herb “got played” by their “puppet masters.” He also tweeted that CNN’s “democratic sources” are trying to push a false narrative.

“I won’t hold my breath for an apology, or for you to call out your puppet masters on the left that fed you BS knowing you would gleefully run with it without ever checking the other side,” Trump Jr. said in a Saturday morning tweet that addressed Raju, CNN’s senior congressional correspondent. “Apparently it was just too good a scoop for you to actually do your job. You got played.”

But here’s the “heads we win” part: since the sources are still anonymous, there can be no “evidence” -- unless either the sources or the source-exploiters own up to their little secret racket. We are prevented from knowing these are “Democratic sources” – most likely, because they’re Democratic sources, and that would make the story look more -- to use the Post term -- “vocally partisan.”

The “tails you lose” part is when the Post hides all their conservative-hating sources’ identities and then boasts the motto “Democracy dies in darkness.” The Post surely believes reporters are never manipulated by “puppet masters.” They’re always the smartest people in the room. Until it becomes obvious they trusted someone to just read them an email without looking at it themselves. That’s not what smart people do.

As @JohnSalmon859 tweeted: “Either CNN ‘got played’ - or it was purposeful. Trump Jr's being charitable here.” But in CNN's excuse-making, absolutely everyone had the best intentions, their journalists and their sources. The spin is furious, but not convincing.