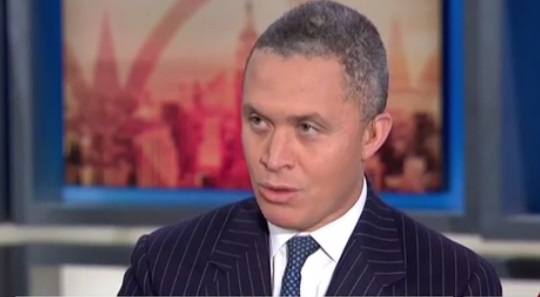 Former Democratic congressman and MSNBC Morning Joe regular Harold Ford Jr. has been fired for misconduct by Morgan Stanley after facing a human resources investigation. “He has been terminated for conduct inconsistent with our values and in violation of our policies,” a spokeswoman for Morgan Stanley told Huffington Post in an email.

In two interviews with HuffPost, the woman alleged that Ford engaged in harassment, intimidation, and forcibly grabbed her one evening in Manhattan, leading her to seek aid from a building security guard. Ford denies the incident and identified the accuser as a journalist:

“This simply did not happen. I have never forcibly grabbed any woman or man in my life. Having drinks and dinner for work is part of my job, and all of my outreach to the news reporter making these false allegations was professional and at the direction of my firm for business purpose," Ford said. "I support and have tremendous respect for the brave women now speaking out in this important national dialogue. False claims like this undermine the real silence breakers."

It should be noted that on Morning Joe, Ford has not always expressed support for "brave women speaking out." In January of 2016, Ford pulled out the traditional "Bill Clinton's sex life has been litigated, move on" defense of Hillary Clinton as Scarborough suggested voters revisit Hillary's history of "bimbo eruptions" to discredit Bill's accusers:

JOE SCARBOROUGH: How does a public that has come to that conclusion say the Bill Clinton stuff's okay, and we're not even going to examine the person who may have been in charge of what has been called the, quote, sluts and nuts defense wing of the Clinton campaign, where they said, their quote was, drag a dollar bill through a trailer park and it's amazing what'll happen.

HAROLD FORD, JR.: Look, I'm not here to defend anybody's past in some of these things. But the facts are pretty clear. Number one, these matters have been litigated and I believe if the Republican party wants to travel back down that path --

Scarborough was pushing a New York Times editorial suggesting Hillary should be held accountable for her hardball defense of Bill:

FORD: The New York Times is not always right.

FORD: Raising your voice at me doesn't make this right. Comparing Bill Clinton to Bill Cosby is wrong.

Ford took offense at the suggestion that his Carvillesque defense was anyone else's "talking points."

MRC's Rich Noyes reminded me that when Ford ran for the Senate and lost a close race to Bob Corker, the networks rushed to Ford's defense over a GOP ad revisiting Ford's personal behavior.

On the October 24, 2006 NBC Nightly News, anchor Brian Williams declared: "Tonight some are saying that one commercial in particular in one very close Senate race has now crossed a racial line." Andrea Mitchell proceeded to critique the RNC ad attacking Democratic Senate candidate Harold Ford making fun of how Ford once attended a Playboy party. In it, a white female recalls how "I met Harold at the Playboy party" and the ad ended with her whispering: "Harold, call me."

Mitchell pounced: "The NAACP said the ad, quote, 'plays to pre-existing prejudices about African-American men and white women'" and "advertising experts like Jerry Della Femina, a Republican, says it is a blatant racial appeal."

ABC joined the effort on the next night’s World News, Dean Reynolds asserted Republicans were acting in desperation:

DEAN REYNOLDS: Bob Corker should be coasting....But his Democratic opponent, Congressman Harold Ford, has proven to be a more adept campaigner, insinuating at every stop that Corker's undeniable wealth includes ill-gotten gains, and tying Corker to an unpopular war and an unpopular President.

REYNOLDS: Faced with the loss of a must-win Senate seat, the Republicans decided to downshift away from Ford's politics to his persona. Drawing on Ford's attendance at a Playboy magazine Super Bowl party last year, the national GOP has been running this commercial, with what many see as racial overtones. First, people lampoon Ford's positions, and then a woman in a suggestive pose says this:

WOMAN IN AD: I met Harold at the Playboy party.

REYNOLDS: And after a few more digs, she adds this just to drive the point home.

WOMAN IN AD: Harold, call me.

REYNOLDS: To many, the message is clear, and in some parts of Tennessee, potentially incendiary.

PROF. JOHN GEER, VANDERBILT UNIVERSITY: I mean, he's talking about interracial sex, interracial relations, relationships. I mean, it's really quite amazing. And it's not the kind of ad you'd expect somebody to be running if they thought they were ahead or at least in a tie.

REYNOLDS: Corker, the man the ad was supposed to benefit, says it should be withdrawn.

CORKER: We've taken the high road in this race, and I think the ads are tacky.

REYNOLDS: Ford said all of this means one thing.

FORD: Our message is resonating. Otherwise, they wouldn't be running these ads.

REYNOLDS: Late today, officials at the Republican National Committee acknowledged that the ad in question has received a lot of negative attention, and they have decided to stop running it here. In a few days, they'll know if the ad did its job or was a risk they should never have taken. Dean Reynolds, ABC News, Knoxville.