Cokie Roberts Admits: All Female Reporters Knew Not to Get In Elevator with Conyers 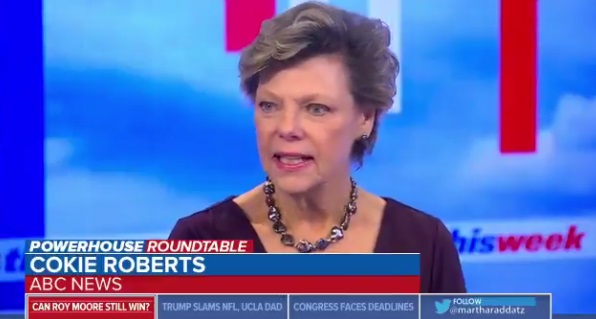 Christine Rousselle at Townhall noticed that on Sunday's This Week, longtime reporter Cokie Roberts implied that leftist Rep. John Conyers pawing women on the elevator was an open secret among the press corps. Conyers entered the House of Representatives at the dawn of 1965, and is now 88 years old.

"I mean, the culture of Capitol Hill for so many decades was men being bad. And...The fact that people are willing to be public can change things. I mean, we all talked about for years," Roberts sid. 'Don't get in the elevator with him,' you know, and the whole every female in the press corps knew that, right, don't get in elevator with him. Now people are saying it out loud. And I think that does make a difference."

Shouldn't this have changed after the liberal media and the Democrats celebrated Anita Hill's accusations against Clarence Thomas in 1991? But it didn't. Allahpundit at Hot Air added that Roberts was announcing this old tale at the same time Nancy Pelosi was spinning for that "icon" Conyers on Meet the Press:

What’s interesting about this clip isn’t the fact that female reporters (or male reporters who’d also heard the stories) didn’t expose Conyers. What’s interesting is why his own congressional leadership didn’t expose him. The problem for the media, as noted, is the power imbalance: Even if they can clear the defamation bar, they’re going to make powerful enemies in the institution they cover by airing dirty laundry. Only someone more powerful than Conyers could semi-safely expose him and raise the odds that he’d be punished. Someone like … Nancy Pelosi, who’s been the leader of the House Democratic caucus for nearly 15 years.

If Cokie Roberts was sufficiently tapped in to know that an elevator ride with Conyers wasn’t safe, Pelosi definitely knew. Exposing him could have wrecked her career, though. She aspired to be the first woman Speaker; taking down Conyers would have divided Democrats, risked alienating the Congressional Black Caucus, and frightened other harassers in her ranks who would worry that they were next. She would have been pushed out. So she looked the other way, just as the leaders of both parties have apparently been doing for ages.