UPDATED: After coming under fire on the Internet -- and perhaps inside the newspaper -- David Horsey and the Los Angeles Times removed two paragraphs from its very negative editorial on Sarah Huckabee Sanders. While the "Big Mother" cartoon remains, the paragraphs about how Sanders was the "slightly chunky soccer mom" so different from Trump's usual preference for "arm candy," for "sleek beauties with long legs and stiletto heels." In its place was an apology from Horsey:

I want to apologize to Times readers — and to Sarah Huckabee Sanders — for a description that was insensitive and failed to meet the standards of our newspaper. It also failed to meet the expectations I have for myself. It surely won’t be my last mistake, but this particular error will be scrupulously avoided in my future commentaries. I’ve removed the offending description. 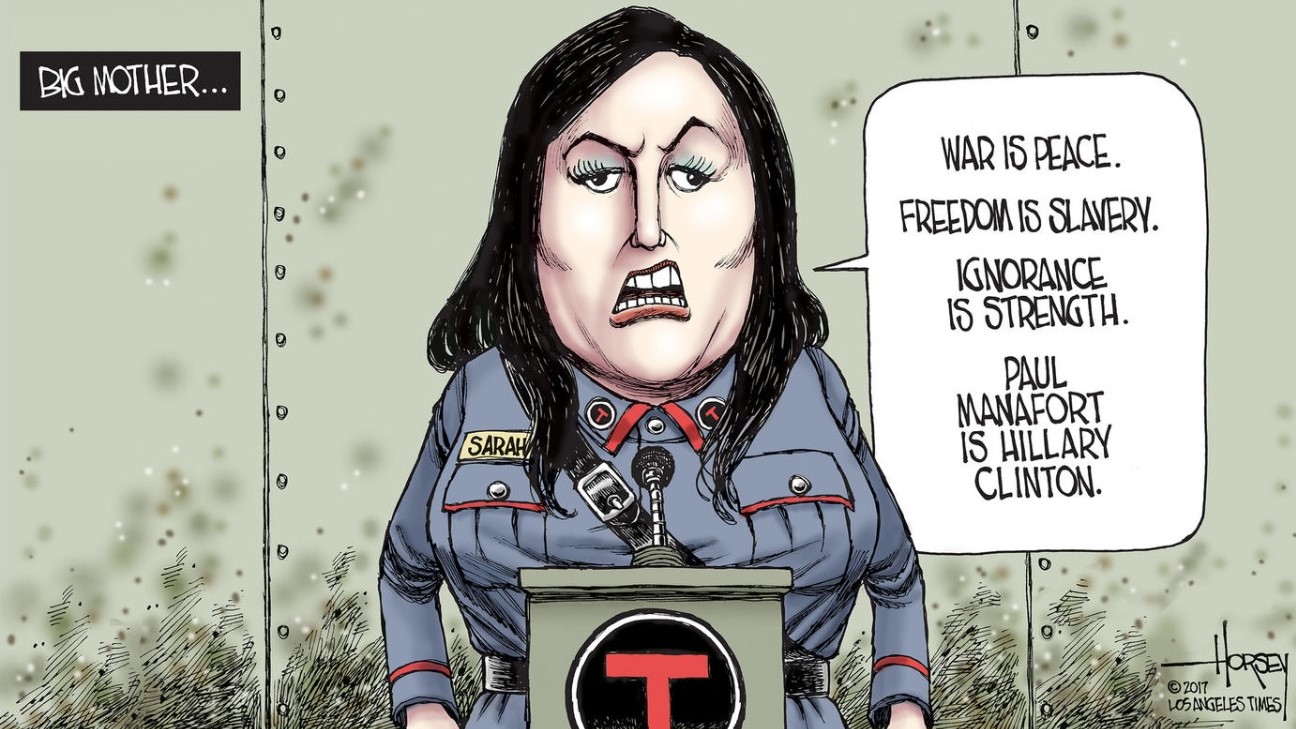 Joel Pollak at Breitbart noted Los Angeles Times editorial cartoonist David Horsey mocked the appearance of White House press secretary Sarah Huckabee Sanders. His November 1 editorial was posted below his cartoon of Sanders as wearing some sort of fascistic gray shirt with “T” buttons on the collars under the headline “BIG MOTHER.” Behind her was a sort of Iron Curtain. Horsey began:

Sarah Huckabee Sanders does not look like the kind of woman Donald Trumpwould choose as his chief spokesperson. Much like Roger Ailes when he was stocking the Fox News lineup with blond Barbie dolls in short, tight skirts, the president has generally exhibited a preference for sleek beauties with long legs and stiletto heels to represent his interests and act as his arm candy.

Trump’s daughter Ivanka and wife Melania are the apotheosis of this type. By comparison, Sanders looks more like a slightly chunky soccer mom who organizes snacks for the kids’ games. Rather than the fake eyelashes and formal dresses she puts on for news briefings, Sanders seems as if she’d be more comfortable in sweats and running shoes. Yet, even if Trump privately wishes he had a supermodel for a press secretary, he is lucky to have Sanders.

This is a back-handed compliment, since the entire editorial insists Sanders is unusually talented at spewing lies. His cartoon has Sanders announcing “War is Peace. Freedom is Slavery. Ignorance is Strength. Paul Manafort is Hillary Clinton.” Horsey “complimented” her as better than Sean Spicer this way: “She delivers the daily load of fibs and evasions in a flat, emotionless voice and, if questioned, keeps her cool, repeats her fallacious statements and sneers as if she hopes there is a firing squad waiting outside for the upstart journalist.”

But the question remains: Why would Sarah’s apparently frumpy appearance make her a better liar than someone who looks like Ivanka and Melania?

Shouldn’t we expect feminists to write angry letters to the editor about this slight of soccer moms in sweats?

And really, isn’t it quite obnoxious to suggest that the press secretary wants the “upstart journalists” executed? Horsey seems to be living in a cartoon, not just drawing them.

She’s awful at this, but that makes her an excellent fit for an administration in which mediocrity, inadequate experience and nepotism run rampant.

Besides, she’s serving a function other than communication, which turns out not to be her forte. (To listen to her pronounce “priorities” is akin to hearing the air seep out of a flat tire, and she leaves half of the consonants on the curb.)

It's always amusing to see a Times columnist rant about "nepotism run rampant" -- under the leadership of Arthur Sulzberger Jr.

PPS: MRC’s Dan Gainor pointed out to me that on October 19, Horsey wrote he was not one of those offensive, sexually harassing males who makes crude remarks about female appearances. That, apparently, is not extended to "slightly chunky soccer moms" he finds unattractive. "Neither I, nor the many admirable males I know, claim to be perfectly enlightened, but I do not think that is what most women are demanding. What they want is a man who gets it; a guy who masters his carnal urges and aspires to be a fair, compassionate, civilized human being."