CORRECTION: Earlier today, I suggested an Oreskes accuser must have worked this year for CNN's Reliable Sources. But since Farhi's story clearly states these TV bookings occurred in the 1990s, any current appearances are irrelevant, so I removed the error. Apologies to the current regime at CNN.

Washington Post media reporter Paul Farhi broke the news on Tuesday that NPR senior vice president for news Michael Oreskes was accused of inappropriately kissing two women on the lips while discussing job prospects in a previous job as Washington bureau chief at The New York Times. NPR then suspended Oreskes, and NPR media reporter David Folkenflik added an internal NPR accusation from 2015 on Tuesday night’s All Things Considered. On Wednesday, NPR president Jarl Mohn said he asked for Oreskes to resign “because of his inappropriate behavior.”

This could be seen as a boomerang for NPR, which took so much pride in pushing the unsubstantiated sex-harassment charges of Anita Hill against black conservative Clarence Thomas in 1991 when it looked like he would be comfortably confirmed to the Supreme Court. Farhi elaborated:

In separate complaints, the women said Oreskes — at the time, the Washington bureau chief of the New York Times — abruptly kissed them while they were speaking with him about working at the newspaper. Both of them told similar stories: After meeting Oreskes and discussing their job prospects, they said he unexpectedly kissed them on the lips and stuck his tongue in their mouths.

This might be seen by Washington politicos as the “Bob Packwood approach.” The Oregon senator was accused of inappropriate tongue-kissing just after the 1992 elections. Oreskes allegedly added a creepiness factor by following up with a personal ad in a local alternative weekly: 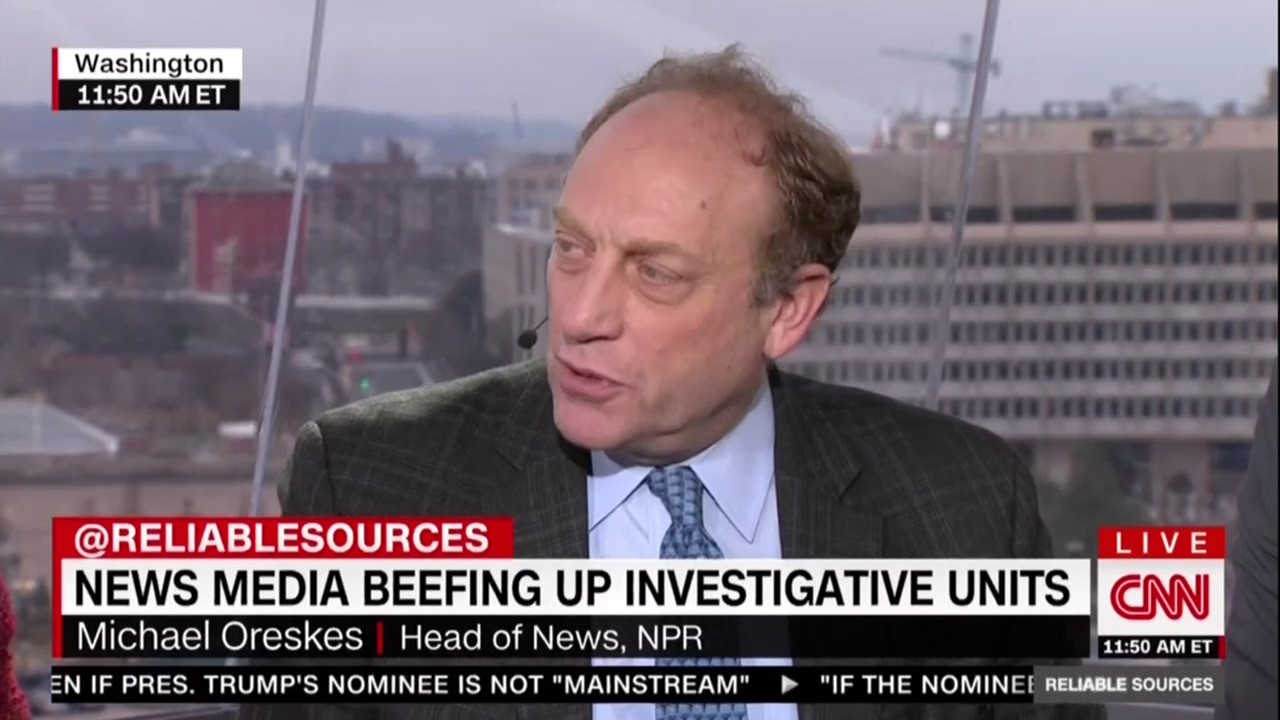 The first woman said she met Oreskes at the Times’ offices in the Army and Navy Club Building in downtown Washington.

Afterward, she said, he took out a personal ad in the Washington City Paper aimed at her. It read: “Saw you at the Army-Navy Building. Loved hearing your life story and your ideas. Hope you get this message. Let me know.”

She recounted that a week later, he emailed her to ask why she hadn’t responded to his ad. The woman said she was unaware of it and had to search for it. “What was especially creepy about it was that he put it in the wrong place in the paper,” she said in an interview. Instead of appearing in the “Missed Connections” section, the ad was in a section called “Adult Services” that featured thinly disguised offers of prostitution.

"The second woman" in the story booked Oreskes on a "TV program she was producing," and then they had lunch at Union Station after a second booking two months later.

After joining NPR in the spring of 2015, Oreskes encouraged staffers to reach out to him to discuss their careers during his visit to NPR West in Culver City, Calif. At the time Hersher had been working a series of temporary assignments for NPR, and she took him up on his offer during a subsequent visit to Washington. An afternoon meeting was pushed off into evening and an invitation to dinner at a seafood restaurant near Union Station.

Hersher, now a reporter and producer on NPR's science desk, says she wanted to tell him about her belief that she would need to leave NPR to transform from a producer to a reporter. Her dinner with Oreskes became increasingly uncomfortable as the conversation veered into personal matters involving relationships and sex. At one point, she says, he referred to a former flame as his first "sex girlfriend."

Hersher says the conversation made her uncomfortable.

"From my point of view, every little thing that he or I said pointed to the relative difference in power," she said. "Like he's the one with the power. He's the one who gets to decide what we talk about - and I am trying to keep up."

Hersher said he gave her what seemed like a nonromantic hug at the train station afterward, and that he did not otherwise touch her or suggest any physical involvement.

But she said her then called her boyfriend and cried, and said it shook her confidence.

Farhi’s story also included another fascinating angle -- Jill Abramson, a prominent Times reporter in the Hill-Thomas hearings who also wrote a book on the matter called Strange Justice, which has been a liberal soap-opera TV movie (twice), didn't act against Oreskes at the Times! Abramson might have been looking out for her own ambition, and she became Executive Editor. So much for feminist advocacy:

Neither woman complained at the time; both believed that their complaints would be ignored and would jeopardize any chance of working for the Times.

Both said they were motivated to come forward now by NPR’s coverage of recent sexual harassment episodes, especially those involving Harvey Weinstein. “The idea that he’s in charge of that coverage is just so hypocritical to me,” one woman said. “It’s sickening. I want to say: ‘You owe me... a public apology. You should recuse yourself” from NPR’s coverage of harassment.

Two people who worked at the Times with Oreskes around the late 1990s recalled that he focused extraordinary attention on another young woman who worked as a news aide in the Washington bureau.

“I would call it pestering,” said one editor. “It made [the woman] really nervous. There was excessive phone calling [by him to her] and messages that he wanted to meet her outside the office.”

This account was confirmed by Jill Abramson, who was Oreskes’s deputy at the time. Abramson, who went on to become the Times’ top editor and is now a columnist and a senior lecturer at Harvard, said in an interview that she regretted not confronting Oreskes about his behavior.

“If I had to do it again, I would have told him to knock it off,” said Abramson, co-author of a book about the Clarence Thomas-Anita Hill harassment case. “I think I should have raised this with [the Times’ human resources department]. . . . Maybe confronting him would have somehow stopped him from doing it to another woman.”

Abramson said she hesitated in part because the young woman didn’t want to raise the issue but did want Oreskes’s alleged behavior to stop. But Abramson said: “I don’t really feel it was in a gray area in retrospect. I should have stopped him.”

The Times placed their Oreskes story at the bottom of page B-2, without almost no original reporting from Sydney Ember. (Abramson refused to give Ember any comment.) The front of the Business Day section was headlined "Protecting the Disgraced," with pictures of Bill O'Reilly, Mark Halperin, and Harvey Weinstein. The story by Noam Scheiber dominated that page, complete, with a lede in headline-size type.