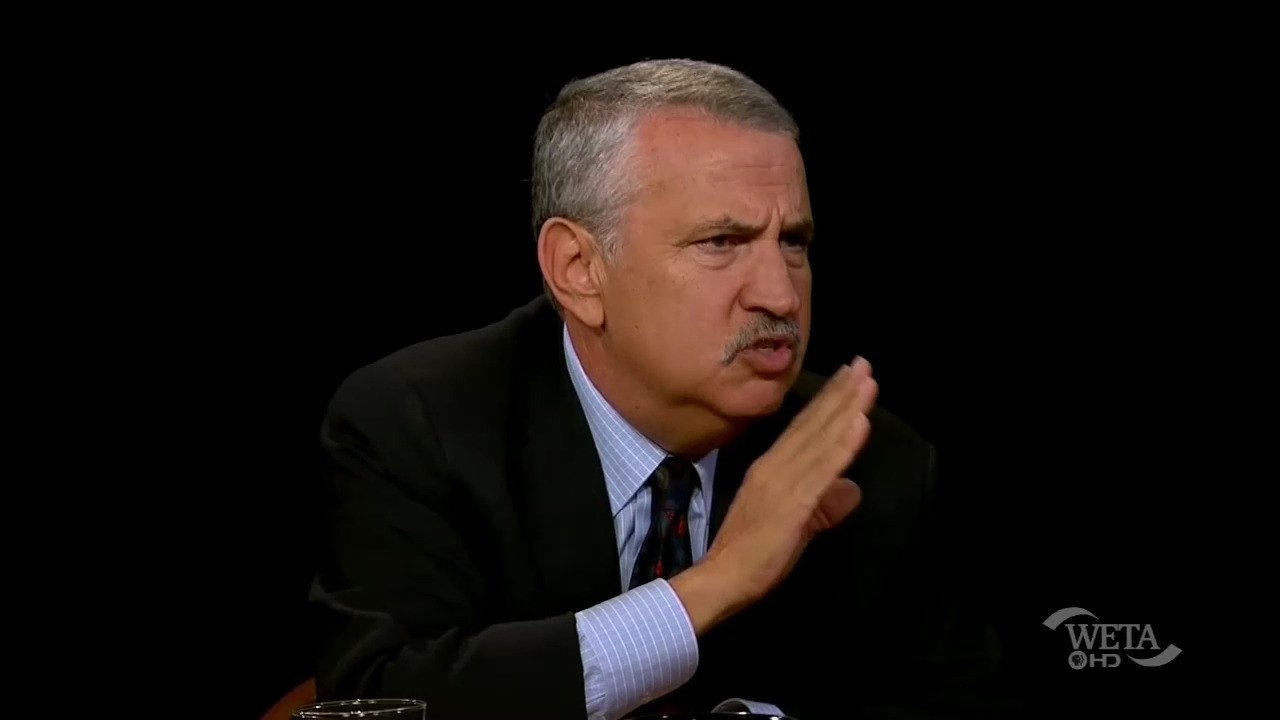 The New York Times carried a column last weekend by Maureen Dowd where Jimmy Carter shocked the liberals by saying “I think the media have been harder on Trump than any other president certainly that I've known about...I think they feel free to claim that Trump is mentally deranged and everything else without hesitation.” Times columnist Thomas Friedman took it to a new level on Wednesday's Charlie Rose on PBS. Trump isn't mentally ill...he's a brain-eating disease.

The PBS show began by previewing his quote -- stick around for this hot take, liberals! -- "Trump is a brain-eating disease, so that is that he -- he sucks up all the oxygen in the room. We feel we have to write about him so much, as a columnist, on the one hand I don't want to because I'm not really learning anything. When I wrote that column today, I'm just sort of emoting, expressing my concern."

Rose offered the typical oblation to this all-knowing genius: "Tom Friedman is here. He is columnist for The New York Times and recipient of the Pulitzer Prize. He's best known for tackling big ideas and complicated issues. He is a self-confessed explanatory journalist. His goal is to translate from English to English.... Welcome, sir."

So Trump is a "brain-eating disease." EPA administrator Scott Pruitt is a "knucklehead." Chief of staff John Kelly? "He's been sullied by Trump's metastasizing ethical cancer." CIA director Mike Pompeo? "I think he's really gone over to the dark side."

Friedman and Rose mourned how Trump's fiercest critics make harsh speeches and then announce they're quitting:

THOMAS FRIEDMAN: And we all know those of us in the news business it gets worse every week. And the signs of it getting works as we saw this week not only Corker but Jeff Flake, the senator from Arizona announced that he was bowing out and went out saying basically the president is indecent, dishonest man. We're seeing so many unusual things.

ROSE: And what had to happen, somebody had to stand up like Joseph Welch stood up to Senator McCarthy.

FRIEDMAN: Here is what I wish though, Charlie, that Corker and Flake had done. That they had made that exact diagnosis they made, and then said "And that's why I'm running. I'm not going to let the Bannons decide. You know what, I may even go down in flames but I'm going to fight these ideas. I'm not just going to tell you how bad Trump is, I'm going to run and fight for what I think are real conservative principles."

Did you catch that? He suggested Trump, and Republicans who aren't openly declaring war on Trump are like Middle Eastern extremists, that is, jihadists. And they're lecturing about McCarthy and human decency? Liberals love to suggest PBS is a civil space...but that's because they're not being called terrorists on it.

Rose did have one weak moment where he acknowledged there might be a Democratic problem, but it was over quickly. Gee, that uranium scandal is too bad, let's acknowledge it's a thing and get beyond it:

ROSE: There is something else on the table that came out today, this motion that the Clinton campaign may have funded the group that went out to create the dossier.

ROSE: Does that bother you?

FRIEDMAN: Yeah, I mean it's some -- it doesn't surprise me. I mean politics is dirty. We know Donald Trump's kid met with someone who seemed to entice them by saying we can do the same with Clinton, but yeah, not something I would be particularly proud of. And something, you know we certainly should find out about.

This last part is where Friedman grew seriously animated, with all kinds of gesticulating about Trump is "eliminating family planning funding" and how he "basically banned the study of climate change." Friedman's one of those lefties who think ISIS is growing in Africa because -- climate change. Better weather would prevent Islamic radicalization.

FRIEDMAN: Trump says we're going to take -- we're going to help the French because the French were all suffering, I got a thousand guys, we're going to beat back those al-Qaeda guys, that is what Trump is doing with his left hand. What has he done with his right hand? He's eliminated all our family planning funding for foreign countries and at home, trying to --

FRIEDMAN: And he`s basically, he is the knucklehead, that is the only -- that's a nice way of talking about Scott Pruitt who is running the EPA, has basically banned the study of climate change. So think about what we are doing. With his left hand, he`s sending troops to Niger which are all dealing with a human tragedy and disorder, driven in great deal by climate and population, and since...

ROSE: Two things he turned his back on.

FRIEDMAN: Two things he turned his back on. That is just flat-out stupid. That is not connecting the dots at all. And that is what I mean, if you don`t wake up in the morning and say what is going on in the world.

ROSE: How does it come together?

FRIEDMAN: How do we tie all these things together, because I don't want to send 10,000 troops there. But if we don't have a climate policy and a population policy, and a governance, helping these people govern, then all these countries there won't be enough troops to keep them back. And Trump says he's going to build a wall.

No. Mr. President, is your wall going to be deeper and wider than the Mediterranean because it sure hasn't kept these people out of Europe, OK? And that Rio Grande, that it's a little drinking fountain next to the Mediterranean. So you've got to connect the dots. And he's not doing that.

He is just saying I made you applaud. I took away -- I attacked Planned Parenthood. Look at my base is applauding. I took away your climate change. You know, I changed policy. Look how the oil companies are applauding. And look at me, I send Green Berets to Africa, to Niger. Real men send Green Berets. Yay, Donald. Meanwhile none of it adds up. The whole thing is completely incomprehensible. And that is a travesty.

Speaking of incomprehensible arguments, what Friedman claimed was "eliminating family planning funding" does nothing of the sort. The Mexico City policy -- put in place by Republican presidents since Reagan, and removed by Democratic presidents in their terms -- merely prevents U.S. foreign aid from going to groups which provide or promote abortion overseas, which is strongly supported in polls.

As for "banning the study of climate change" at EPA, this seems to refer to a story reported by Juliet Eilperin of The Washington Post about an EPA aide named John Konkus vetoing grant proposals that mention climate change:

John Konkus reviews every award the agency gives out, along with every grant solicitation before it is issued. According to both career and political employees, Konkus has told staff that he is on the lookout for “the double C-word” — climate change — and repeatedly has instructed grant officers to eliminate references to the subject in solicitations. Konkus, who officially works in the EPA’s public affairs office, has canceled close to $2 million competitively awarded to universities and nonprofit organizations.

So blocking $2 million in EPA grants is somehow leading inevitably to ISIS growing in Niger. Who sounds incomprehensible again? Who sounds "flat-out stupid"?