'Saturday Night Live' Gets a Sex-Toy Boost from PolitiFact

PolitiFact's "Truth-O-Meter" is an incredibly fickle instrument. It depends on who the liberals at PolitiFact want to paint as "True" and who they want to shame as "False." Bryan White at the blog PolitiFact Bias reports that in "fact checks" that were six days apart, PolitiFact demonstrated how two similarly un-enforced laws drew very different verdicts. 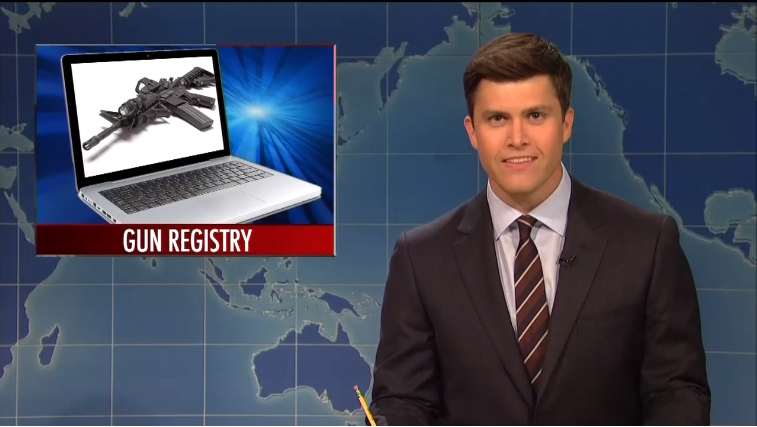 [Alabama Senate candidate Roy] Moore asserted that an act of Congress made it "against the law" to fail to stand for the playing of the national anthem. PolitiFact confirmed the existence of the law Moore referenced, but noted that it merely offered guidance on proper etiquette. It did not provide any punishment for improper etiquette.

Both laws exist. The one Moore cited carries no teeth because it describes proper etiquette, not a legal requirement backed by government police power. The one Jost cited lacks teeth because the Court voided it.

So there are two laws that lack any teeth. But guess where these men landed on the Truth-O-Meter?

For Moore, PolitiFact -- edited by Editor Angie Drobnic Holan -- ruled "his statement gives the false impression the law is binding, when in fact it’s merely guidance that carries no penalty. Additionally, legal experts told us the First Amendment protects the right to kneel during the national anthem. We rate this False."

For Jost's dildo-limit law, apparently comedy is more truthful: "Such a cap on 'obscene devices' has been state law since the 1970s though it’s worth clarifying that the law mostly hasn’t been enforced since federal appeals judges found it unconstitutional in 2008. We rate the claim Mostly True."

PolitiFact boosted Jost as Mostly True on its Facebook page: 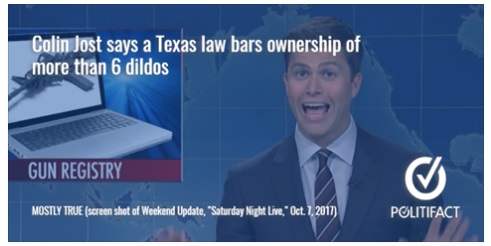 White concluded: "We call these rulings inconsistent. Inconsistency is a bad look for fact checkers."