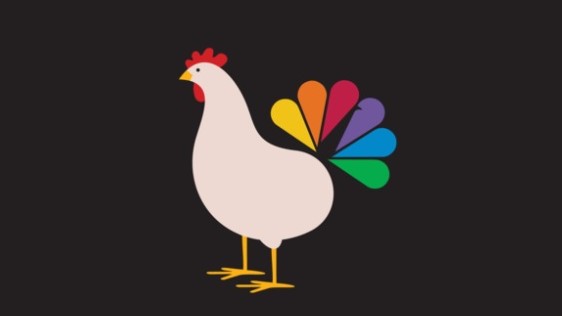 The Huffington Post has a new article on how NBC executives quashed Ronan Farrow's Harvey Weinstein story by freelance reporter Yashar Ali and Lydia Polgreen, the site's executive editor. Washington Post data reporter Christopher Ingraham responded by tweeting "Becoming more and more clear that what happened at NBC is straight-up journalistic malpractice." The HuffPost suggested cowardice at NBC...putting the NBC peacock feathers on the butt of a chicken.

In mid-August, Ronan Farrow, an NBC News contributor, had secured an interview with a woman who was willing to appear on camera, in silhouette, her identity concealed, and say Harvey Weinstein had raped her, according to four people with close knowledge of the reporting....

But at that moment Farrow was also caught in the pincers of an NBC News edict. He had been told by executives at NBC News that he didn’t have enough reporting to go on air with his Weinstein story, according to four sources, and he had been told by the network to stop reporting on it. NBC tried to put a stop to the interview with the woman accusing Weinstein of rape. The network insisted he not use an NBC News crew for the interview, and neither was he to mention his NBC News affiliation. And so that was how Ronan Farrow wound up paying out of his own pocket for a camera crew to film an interview.

As a project for NBC News, Farrow’s story was effectively dead.

How does a "courageous" news network that posed in 2016 as the defender of women against sexist pussy-grabbers end up refusing to pay for a woman's allegation of rape against a powerful Hollywood mogul? Surely NBC pays to videotape interviews they later determine isn't strong enough for broadcast. This move just reeks of wanting not to report something.

Here's how NBC reacted in the months leading up to this refusal to pay for Farrow's interview:

By April, NBC News had two big scoops in its pocket: an on-record interview with [actress Rose] McGowan and the explosive audio of Weinstein admitting to sexual assault. But Farrow was told by multiple NBC News executives and producers that the reporting and interviews he had conducted weren’t sufficient for a televised story. According to four sources, Farrow and McHugh also prepared a lengthy text story to run on the NBC News web site, but Farrow was told it wouldn’t run.

At this point, Farrow and McHugh were ready to move forward with the story but were told by NBC executives that the story had to go up to NBC News Chairman Andy Lack for approval and that the story would be under review by Steve Burke, executive vice-president of Comcast, and president and CEO of NBCUniversal — a highly unusual level of scrutiny, according to three NBC News staffers, who had never heard of Burke’s office needing to review a story.

In August, according to four sources familiar with the conversations, Farrow was repeatedly told by the network that he didn’t have enough reporting done to go to air but that he should also stop reporting on Weinstein’s story, putting him in an untenable position.

None of this matched what NBC News president Noah Oppenheim claimed: “The notion that we would try to cover for a powerful person is deeply offensive to all of us. We were on that long list of places that chased this thing, tried to nail it, but weren’t ultimately the ones who broke it.”

But 12 anonymous sources inside and outside NBC with knowledge of the internal debate "detailed a months-long struggle within NBC News during which Oppenheim and other executives slow-walked Farrow’s story, crippling it with their qualms and irresolution."

Unsurprisingly, Weinstein and his representatives suggested Farrow had a conflict of interest in his sour relationship with his father, Woody Allen. "According to multiple sources inside and outside of NBC News who worked on the aborted story, Oppenheim related to Farrow what Weinstein’s lawyers had said in complaint to NBC: that Farrow had a conflict of interest because Weinstein had helped revive the career of Farrow’s estranged father, director Woody Allen."

Four sources said Farrow was told twice that the story was “reportable,” meaning it had passed the network’s stringent fact checking and legal process, They also said a separate NBC investigative journalist was also asked to re-report his work, "and her review raised no flags."

But Farrow was granted position to take his scoop to The New Yorker instead. Then Matt Lauer bizarrely praised Farrow on Wednesday as if NBC hadn't crushed his scoop, as he had been "working for this story for a long time, both for NBC News and The New Yorker."

When the New York Times broke its story early on Thursday afternoon, NBC couldn't find time in its newscast, and Oppenheim apparently said Weinstein wasn't a "nationally recognizable figure." (NBC's Access Hollywood also stayed silent.) This spin was comical, since they offered a Kasie Hunt story that night on obscure Republican Rep. Tim Murphy resigning after asking his mistress to get an abortion.

Two sources familiar with the production told HuffPost that Oppenheim made the final decision not to include a Weinstein story in the broadcast, telling staff that Weinstein wasn’t a nationally recognizable figure. That weekend when “Saturday Night Live” Executive Producer Lorne Michaels was criticized for not including any Weinstein jokes, he told The Daily Mail that “it’s a New York thing,” suggesting something similar. NBC insiders have told HuffPost that this has led some employees to wonder if this was an internal talking point that NBC executives were using to justify the lack of coverage.