As NBC faces questions about why it turned away Ronan Farrow’s story on Harvey Weinstein, it’s worth taking a minute to ridicule the idea that NBC’s Saturday Night Live skipped over Harvey Weinstein last Saturday because, as SNL boss Lorne Michaels told the Daily Mail mocking Weinstein would be a “New York thing.” (Apparently, they tried a Weinstein joke in "Weekend Update" during rehearsal, but it was cut as not funny enough.)

New York Times reporter Dave Itzkoff suggested that criticizing this was only a conservative thing: "The absence of any commentary about Mr. Weinstein opened up SNL to rebukes from conservative critics who said that the show was covering up for a prominent liberal." 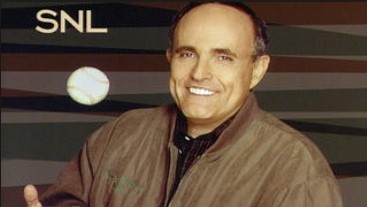 Was Lorne joking about it being too local? Shooting that down is the ultimate fish-in-a-barrel game. A quick Google search shows SNL featured ten sketches with Fred Armisen mocking legally blind New York Gov. David Paterson, with his character constantly mocking New Jersey. Nothing local there?

When Meryl Streep is quipping that Weinstein was God – at least within the world of movie-making – perhaps he’s large enough for satire. It’s easier to guess that NBC Universal didn’t want to mess up any future dealings with the Weinstein Company. At least until they fired Harvey....on Sunday.