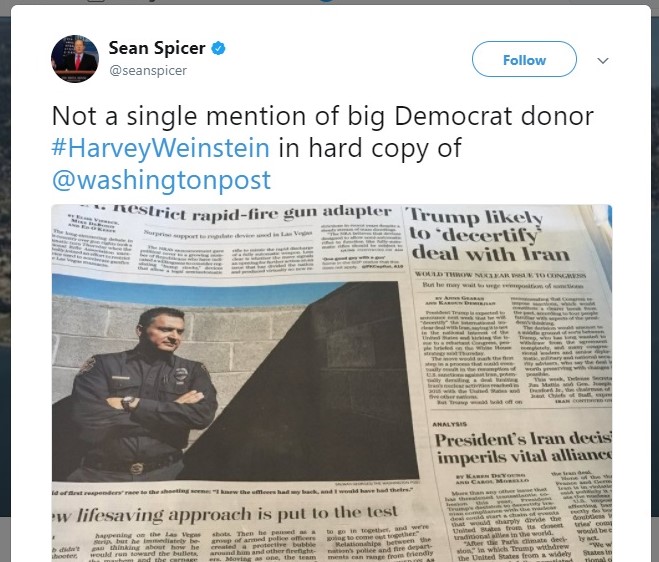 One might understand not throwing it on the front page -- but to leave it out entirely? It's not like the story broke in the evening. The Times touted their exclusive on Twitter at 2:07 pm. The Post couldn't even put it on the front page of the Style section, where the top-right story was on Roy Wood Jr. of The Daily Show: "TV comic is seasoned in skewering Trump." Yawn.

This makes the Post look lazy in comparison to its aggressive coverage of Trump after the Access Hollywood tape, breaking the story of the tape ahead of NBC and then offering their own exclusive (and unsubstantiated) charges of Trump accusers on the front page. In fact, the Post's Stephanie Merry had a Weinstein story posted bt 5:28 pm. But someone never placed it in the Actual Paper.

Merry took about 12 paragraphs and a pile of tweets before noticing that Democrat-donor, Obama-helper part: "He was also famous for his politics, a vocal liberal who donated to many of Hillary Clinton’s campaigns; Malia Obama even interned for him in New York earlier this year."

What about the others? USA Today offered a story on page 5-D (their entertainment section). The Wall Street Journal placed it underneath the fold on page B-5, a thin 10-paragraph dispatch.Their beyond-boring headline was "Film Mogul Takes Leave Amid Scandal."

MSNBC's Chris Hayes -- of the NBC network that couldn't locate Weinstein with two hands on Thursday night -- pronounced this Friday's Dumbest Take, for some reason. Because it wasn't about Russian meddling? 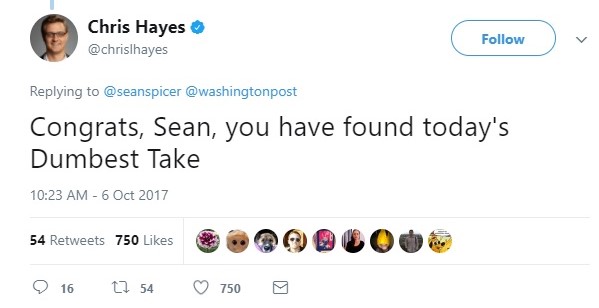 CNN lefty Andrew Kaczynski (the former “BuzzFeed Andrew”) offered more crippled excuses, like, hey the Post was all over this story online. That's good, and that takes a little sting out of the "covering for Democrat donor" charge. But it also makes it less defensible to skip it in the paper: 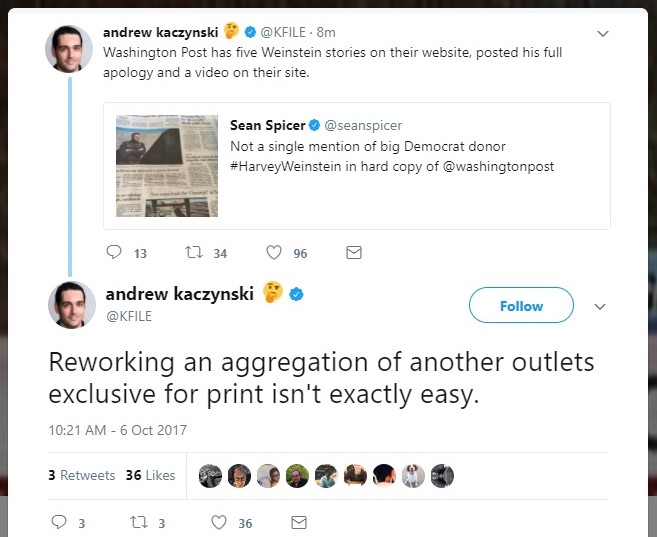 Public-radio host Lizzie O’Leary of Marketplace Weekend shot to Spicer “Gonna go out on a limb here and guess that's because it's a @nytimes story.” Spicer replied “That’s a weak limb to be on.” New York Times reporter Alex Burns strangely mocked his own newspaper’s story in a response to O’Leary: “(slams down newspaper, startling entire Berlin cafe) why is Die Welt burying this story!”