Joy Reid: Trump Era Is 'The Worst Time to Be a Human'

MSNBC weekend host Joy Reid drew another gushy interview from the liberal media, in this case New York magazine's Josef Adalian. Check out the first syrupy sentence: "Joy Reid has not figured out how to bend the rules of space and time, though regular viewers of MSNBC can be forgiven for thinking she somehow has done just that." Reid really does have a talent for bending reality, imagining in this interview that right now in the Age of Trump is the "worst time to be a human" and that Republicans are out to repeal the 20th century. But not before Adalian praises her as an incredible success: 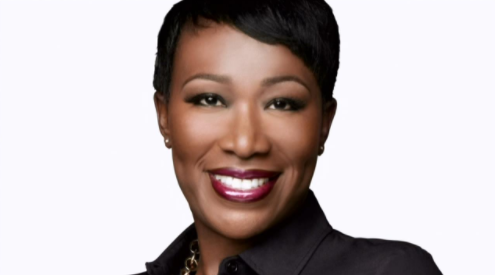 ADALIAN: There has to be some irony here for you. You were obviously doing very well before the 2016 campaign, but that election season and the subsequent elevation of Trump to the presidency have actually been incredible for your career. AM Joy is setting ratings records for MSNBC. You’re reaching twice as many viewers as you did before, probably, and you’re connecting to them on a very deep level. And yet you’re clearly not very happy about where the country has been heading. Is there a mixed-emotion type thing going on for you?

REID: I’ve said to people that this is probably the greatest time to be a journalist, and the worst time to be a human. I’m grateful for the platform that I have. I was grateful for it before, when it was much smaller. I think because this election was so unusual, and because I kind of am a stand-in for my viewers — I can be shocked on their behalf — that made people connect with me more. I’m an opinion journalist, so I don’t have to pretend not to be shocked and appalled. I can actually be shocked and appalled. [Italics in the original.] So it’s kind of played to my strength in a way.

Reid strangely claimed she had to stay more objective on her afternoon show The Reid Report – in case anyone remembers her being objective. (At that point, MSNBC wasn’t really trying to be a news channel, just a rantfest.)

Since the Republican domination of Washington (at least on paper) is "the worst time to be a human," it's not surprising that Reid also insists the Republicans want to repeal the 20th century. Adalian asked about the subject of her next (nonfiction?) book would be:

I kind of want to write about this drive on the right to just repeal the 20th century. The 20th century so shook the right wing in this country that they can’t give up on getting rid of the real totems of the 20th century — the guaranteed retirement income, guaranteed health care, voting rights. Those items that made the 20th century work are what Paul Ryan and Mitch McConnell and company are still trying to get rid of. They’re still fighting it!

Adalian’s toughest question recalled that Reid predicted Hillary Clinton would win easily with more than 300 electoral votes. OOPS. Partisans are optimists on these events. He only wanted to know how she felt about it. Somehow, millennials hate her because the conservatives have been mean to her since the 1990s?

I discounted the anecdotal evidence of how much the millennial voter generation hates Hillary Clinton, and has come to hate her, in part because of the long campaign to discredit her, because of the primary — for lots of reasons. And also because the Russian effort was successful. A lot of the information they put out that was anti–Hillary Clinton was designed to work on the sort of Berniecrat, the marginal Democratic leaner, and on the young voter. And it did work on a lot of people. So it just never occurred to me she could lose those three states.

We also learned that Reid loves the "conservatives" who ardently oppose Trump on everything, as well as that "Republican" Ana Navarro on CNN:

ADALIAN: On the flip side, it has to be a bit heartening that some conservatives who used to be sort of MSNBC “villains” are now on your network trashing a Republican president.

REID: One of the most amazing outcomes of the Trump administration is the number of neo-conservatives that are now my friends and I am aligned with. I found myself agreeing on a panel with Bill Kristol. I agree more with Jennifer Rubin, David Frum, and Max Boot than I do with some people on the far left. I am shocked at the way that Donald Trump has brought people together.

ADALIAN: I wish there was a battle of the network cable network news stars so we could get you and CNN’s Ana Navarro onscreen together.

REID: Oh my god, I adore her. There are a couple of people that I’d want to nick from CNN if I could get them, and she’s one of them.

REID: I would love to have Angie Rye back. I think she’s brilliant. She used to be here. April Ryan used to be here. She should still be here; I miss her. I won’t go into any [more]. I love Ana Navarro. You can put that in.

Perhaps the most lucid part of the interview is Reid disagreeing with Adalian that the media used to be very "objective" in the early days of TV news, when instead they drew on the civil-rights battles of the South to take a side and dismiss the other side (and that crusading easily transferred to other topics, like Vietnam and pollution). So it's not surprising that partisan anchor Joy Reid adores Dan Rather, and forget any ethical face-plants with phony documents:

I always liked David Gergen, even though he and I aren’t politically similar. I thought, that’s the kind of career I want to have. He is somebody who has been in politics and then transitioned into media, and does it really well. And of course, Dan Rather is my idol. I got to meet him, and I’ve been a fan of him forever, which is super surreal. I adore Ted Koppel, the other person I grew up on. It’s also crazy when Tom Brokaw is just walking through the hallways at NBC. That’s a legend, and I can say hi to him. Just being in this building can be overwhelming at times.