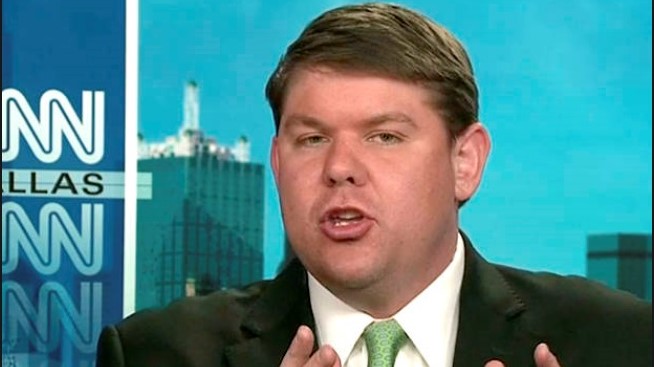 Conservative CNN analyst Ben Ferguson was one of the first pundits to face liberal-media anger over President Trump's Twitter reaction to a vicious vehicular homicide against Klan counter-protesters in Charlottesville, Virginia on Saturday afternoon. “We condemn in the strongest possible terms this egregious display of hatred, bigotry, and violence on many sides — on many sides,” Trump said.

Ferguson said the president denounced violence and hate, but CNN anchor Ana Cabrera wasn't having it. Liberals pretended there weren't any hateful violent leftists throwing punches in Charlottesville in Saturday.

I don't think it's a time for it to become such a political conversation, that, I think we all need to take a deep breath and we need to realize, there are bigoted, racist, god-awful people in this country and let's not pour more gasoline on that fire. Let's condemn it. Let's make sure everyone can go home and be safe and let's make sure that we're not trying to make political statements or attack a governor or somebody else or the your own personal political gain. I think that's one of the things that bothers me the most —

Cabrera broke in, and Ferguson energetically denounced David Duke, including the note that the liberal media enable him with air time:

CABRERA: But Ben, when you hear from somebody participating in the hate that's happening there, David Duke, saying they're trying to fulfill the President's promise, they're bringing politics into it.

FERGUSON: David Duke is white trash and the only reason that David Duke brings up any political leader is because he knows he'll get on TV for it and then his hate will be broadcast to millions of people and he accomplished that today. David Duke has been condemned by this president. David Duke has been condemned by literally thousands upon thousands of politicians. David Duke is a nobody in my book and a has been but as he walks out there to get himself on TV, he mentions something that connects him to a sitting President. And when he does it, his message gets out to millions of people.

I don't care about David Duke. David Duke is a vile, disgusting human being and I don't think he should have a voice, I don't think he has a voice to that many people and we certainly shouldn't give him a megaphone when he says bigoted and racist things. David Duke is a disgusting human being. But let's stop letting him play us by saying I'm going to talk about Donald Trump and then a racist white people in this country.

CABRERA: But the President did not call out David Duke's, the KKK, white nationalist, white supremacist.

FERGUSON: Because I don’t think David Duke needs to — he's already — he’s already made it very clear during the campaign that — he’s said I'm not David Duke. I don't like him. I don't know him. I don't want to be part of him. His group is not an accepted endorsement.

All of Ferguson's condemnation caused the CNN anchor to shift the story: "But, forget David Duke. We are talking about this movement, Ben, the people who are emboldened right now to have a rally like this, to ram a car into a crowd of people." CNN would not suggest after a Muslim act of domestic terrorism that Obama "emboldened" the violent act.