Breitbart reporter Matthew Boyle, who’s been very chummy with Team Trump over the last couple of years, wrote Davenport was “actually soliciting government employees to become leakers. What’s more, the emails demonstrate the Times colluded with the president of government union to encourage and solicit these leaks.”

Washington Post media blogger Erik Wemple took that mockery to his blog, asserting Breitbart and other Trump-backing folks don’t understand journalism at all. The headline was "Breitbart confirms it has no idea what journalism is." He wrote:

There’s much more to Davenport’s email, and each line is unassailable — a reporter diligently trying to find inside information critical to U.S. taxpayers. It is journalism, and its very practice is under siege from people who don’t understand it. These days the siege often targets the New York Times, whether the assailant is Matthew Boyle, the National Rifle Association, the vice president or the president. An increasing chunk of the media critic’s portfolio in these times is standing up and saying, in defense of the New York Times: This is journalism.

Wemple is right that reporters don’t just have leakers call them up and leak; they often go out looking for disgruntled or ideological insiders to become their anonymous sources. But in hailing Davenport as “unassailable,” he’s ignoring the obvious point of Davenport’s liberal get-Pruitt agenda. After the election, Davenport lamented the victory of Donald Trump as a "new peril" for climate-change doomsters.

The truly naive people believe that journalism is something created objectively, serving a readership without any explicit attempt to convince readers to support one political side. Anyone who reads The New York Times for a week should know what they’re attempting to manufacture when they create the “news.” They function as Governing Partners when Democrats are in power, and are much more hostile and thumping their chests when the Other Party is in charge.

So here’s the email Boyle is reporting from Davenport to John O'Grady, the leader of a government-employees union representing EPA bureaucrats: 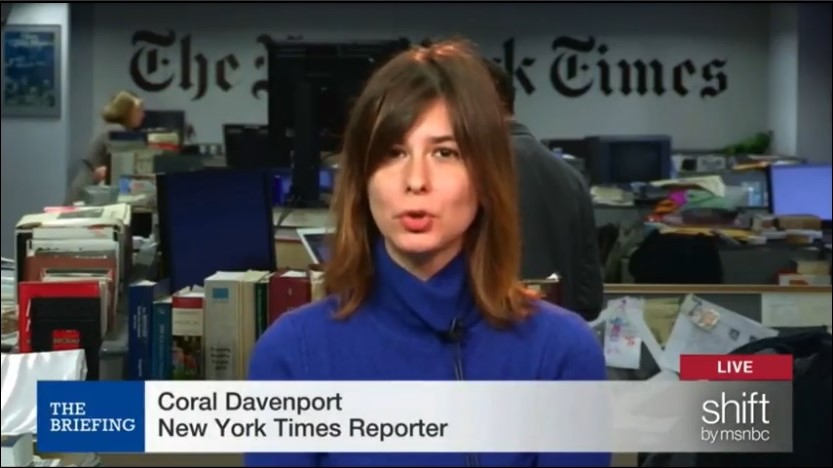 “As I mentioned, I’m working on a story looking specifically at concrete examples of unusual secretary [secrecy?] at E.P.A.,” Davenport states, continuing:

“I’ve heard a lot of second-hand rumors, but in order to report these incidents, I’d need to have first-hand or eyewitness accounts. I’m looking for examples of things like, information being communicated only verbally when it would historically have been put in writing, people being told not to bring phones, laptops or even take notes in meetings where they would in the past typically have done so, eyewitness accounts of things like the administrator or top political appointees refusing to use official email, phones or computers, or any other specific, first-hand examples of practices that appear to demonstrate unprecedented secrecy or transparency.”

What makes this unintentionally funny is the Actual Precedent: Obama’s EPA was rife with appointees evading their official email! Administrator Lisa Jackson had an account with the transgendered alias “Richard Windsor.” (It reminds conservatives of Hillary sending emails to her daughter Chelsea at the alias "Diane Reynolds.")

How curious was the Times on that story? They weren’t. On December 28, 2012, they first reported on this as Jackson stepped down....in paragraph 17. Long after conveying President Obama’s praise for Jackson’s “unwavering commitment,” Times reporter John Broder quickly summarized:

This month, the E.P.A.'s inspector general, prodded by Republicans in Congress, announced that he was opening an inquiry into Ms. Jackson's use of a secondary e-mail account to conduct business inside the agency. Ms. Jackson has said that she used the second account because her public e-mail address was widely known and that her e-mail alias -- ''Richard Windsor'' -- derived from the name of her dog and her former home in Windsor Township, N.J.

There were no Pulitzer Prizes or Peabody Awards in exposing Lisa Jackson. Chris Horner wrote a whole book about The Liberal War on Transparency...but the liberal media weren’t about to highlight that, even as they pose as transparency’s champions.

Now back to Davenport’s email to the government union guy:

“While I’d like to speak to staff about these examples, I DON’T need to quote them by name or with any sort of identifying details that could in any way reveal the source of the information,” Davenport writes. She continues:

We’re VERY sensitive to the need to protect career folks who speak to us, and we DO NOT want to endanger anyone’s employment. But, in order to ensure that our reporting is based on facts rather than rumors, we do need to feel sure that the examples we give are based on first-hand or eyewitness experiences rather than second and third-hand rumors....

“Another way to do this might be through a combination of your interviews and my reporting,” Davenport writes, adding:

If you gave put together multiple eyewitness accounts of a specific example of behavior that demonstrates an unprecedented lack of transparency, we could cite that. Or, if I speak to multiple people who describe, firsthand, such an example, I could cite that without needing any quotations. In general, the more folks I speak to who can offer specific, first-hand accounts of similar phenomena, the more I can write with authority in a broad way with no quotations or identifying details.

From there, she moves on to describe how she has already done this.

“We’ve already done this in a number of other stories this year,” Davenport writes. “Below are four stories that I reported with the help of multiple interviews with current EPA employees. Since the employees gave multiple firsthand accounts but could not be quoted, I was able to describe what was going on without naming, quoting, or identifying any of them. The only employees quoted in these stories are those who specifically gave permission to do so — generally the union leaders. However, the accounts of employees who were not quoted helped to deeply inform the story and allowed me to write with more authority. So looking to do the same this time.”

A Times spokeswoman, Danielle Rhoades-Ha, told Breitbart News there is nothing abnormal about these emails. “The email demonstrates the process of reporting and gathering facts,” Rhoades-Ha said in an email early Tuesday.

That’s not quite right. The email demonstrates the process or organizing anonymous sources to embarrass or inhibit government officials like Scott Pruitt  from doing conservative things.