As expected, on Friday night the PBS NewsHour greeted the failure to repeal Obamacare as a happy "flame-out" by the Republican Party, and pseudo-conservative PBS pundit David Brooks insisted it's time for Republicans to "wrap their minds around the fact" that Americans want to preserve health care as a "right."

NewsHour anchor Judy Woodruff summarized an earlier chat with Brooks: "David, you said they have had a struggle anything passed, getting legislation passed. This was a flame-out for them."

Brooks replied: "Yes, this was a bigger thing than Donald Trump, though. It was only one bill that lost. It was four bills that lost. And it wasn’t only a six-months effort. It was a seven-year effort." Naturally, liberal Mark Shields chimed in: "I agree." 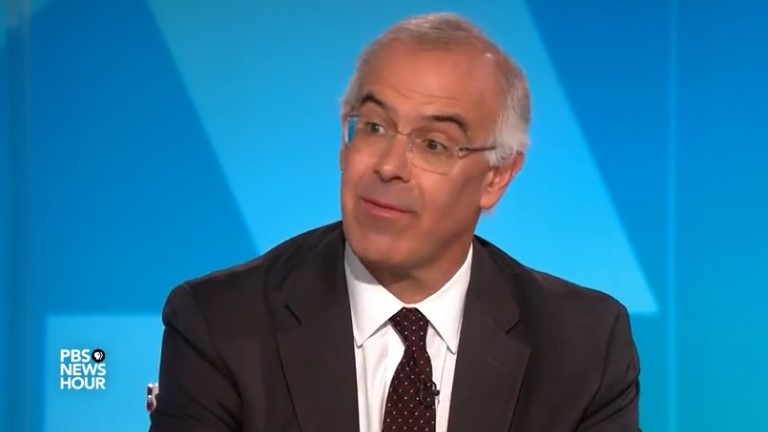 DAVID BROOKS: And you could say you could go back to Newt Gingrich. Think of all the ways the Republicans have tried to trim entitlements like Medicaid or cut government. Name a signal victory. There’s not a victory. They haven’t been able to trim one agency, cut back one entitlement. They failed every single time. And that suggests isn’t an electoral failure. It’s not a failure of whether Mitch McConnell had the right strategy or not, though that was lamentable. It’s a failure of trying to take things away from people.

People are under assault from technology. They’re under assault from a breakdown in social fabric, breakdown in families. They have got wage stagnations. They just don’t want a party to come in and say, 'We’re going to take more away from you.' And so Republicans have to wrap their minds around the fact that the American people basically decided that health care is a right, and they figure, we should get health care. And our fellow countrymen should get health care.

It doesn’t mean you have to do it the way the Democrats want to do it with single-payer or whatever. You can do it with market mechanisms. But you have basically got to wrap your mind around universal coverage...

JUDY WOODRUFF: What do you think the prospects are, David, that they are going to be able to work with the Democrats, or is that just something people are saying that’s never really Going to happen?

BROOKS: I think that there is a potential there. If the Republicans get to the point we’re going to expand coverage, let’s talk about how do it, I think you could do some pretty market-friendly reforms. President Bush did it with the prescription drug bill a number of years ago. But they’re a long way from that right now.

Shields typically unleashed on the Republicans: "It was horrendous. It was disappointing. There were no ideas. There was no will. There was no imagination. And there was certainly no courage."

That's funny: that pretty much describes how conservatives feel when they watch Brooks on PBS.

Then Shields relented a little to praise John McCain and moderate Senators Lisa Murkowski and Susan Collins for voting the repeal down. "John McCain does deserve, in my judgment, a shout-out...And I really do think that his vote — we found out that the testosterone level among Republicans was limited essentially to two members whose names were Lisa and Susan."

Brooks uncorked the same surrender-to-socialist-themes lecture on NPR's All Things Considered on Friday, and his liberal counterpart E.J. Dionne crowed about the defeat of repeal: "I think it was huge in a number of respects, very much along the lines David said. I think the basic idea of Obamacare has won. It's been said for years that Obamacare was deeply unpopular. This is the first time it had a real defense."