WashPost Buries the Lede: Illegal-Alien Influx Across the Border 'Plummeted' in Texas 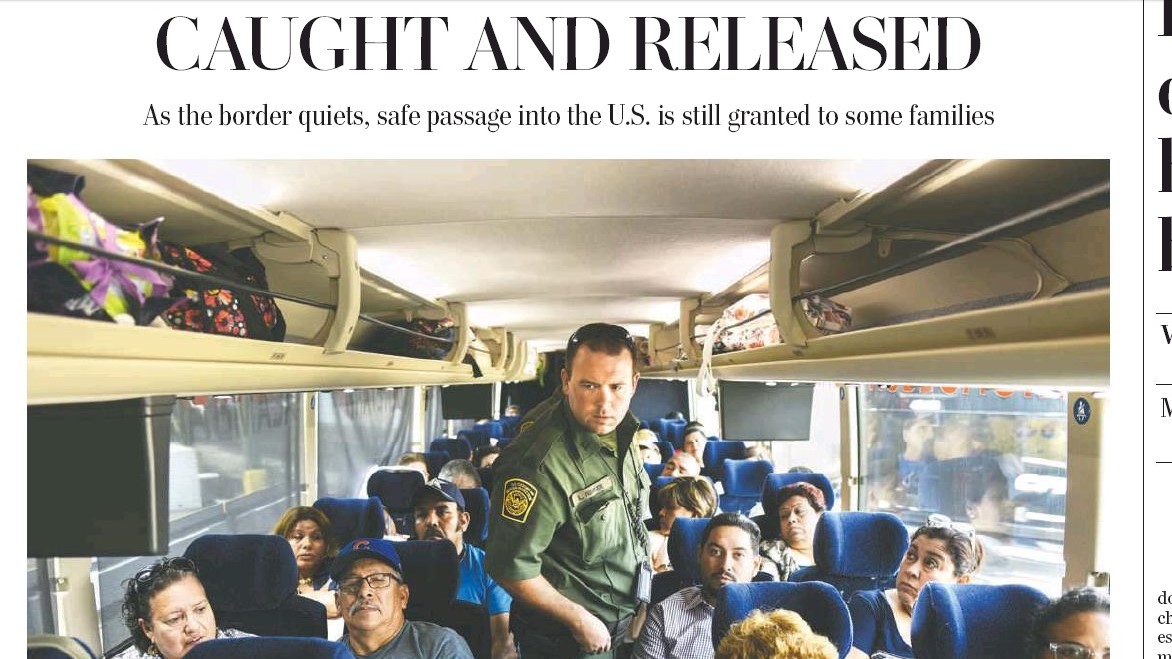 My colleague Dan Gainor urged me to look at paragraph 6 of the dominant front-page story in Monday’s Washington Post. The headline was “CAUGHT AND RELEASED: As the border quiets, safe passed into the U.S. is still granted to some families.” Reporter Jessica Contrera buried the lede on Trump achieving something on the “border quiets” front. The Post pulled off a classic example of putting the money phrase just inside the paper. It's hard to imagine this wasn't manipulated:

Along the border, the impacts of Trump’s immigration policies are visible everywhere: At the [jump to A-6]  river, the number of people crossing into the United States has plummeted. At the detention facilities, fewer people are being detained. And at the McAllen bus station — a place where ICE has released more than 30,000 families since 2014, sometimes hundreds a day — the number of people coming in each day is sometimes down to just an overwhelmed man and his only child, with tickets that will take them 1,700 miles and 46 hours north to live with a relative in Cleveland.

Wouldn't that have been a decent headline? "Number of people crossing border into U.S. plummets in Texas under Trump"?  Or is that "too much winning"?

As the Post headline implies, “catch and release” was the mocking term applied to the Obama policy of allowing each released family to live with their American relatives as long as they would appear at their court dates that would determine whether they would be deported. And who really expected law-breaking immigrants to make those court appointments? Trump issued an executive order on his sixth day in his office, although the government is still working to implement it.

The Contrera story takes up all of page A-6 and a little less than half of A-7, complete with four color photographs. Trump’s “winning” on immigration is noted in the pull quote on A-6 [emphasis theirs]:

“We even used to complain about how many people were coming through. It would start at 8 a.m. – 60 people, 80 people, 90-people groups. So we were tired. But now, oh my God, we miss those groups.” – Gabriela Lopez, a 19-year-old Humanitarian Respite Center staffer in McAllen, Tex.

Gabriela had given thousands of sandwiches to thousands of these families. She used to walk into work and find the respite center packed with parents and children, sometimes more than 300 in a day. On the afternoon she met Miguel and Sandra, she arrived at work to find the room nearly silent. She checked the sign-in sheet for families and saw just one name.

“Quien es Linda?” she asked her manager. Who is Linda?

“The girl that was here earlier,” he told her. “She already left.”

“Oh,” Gabriela said. She put on her uniform, a vest that said Disaster Response across the back. Then she pulled out her iPhone, stared at it for a while, and began another day with no disaster to respond to.

There was also this little measurement of the new policy, when someone brought donations to Lopez:

Gabriela pointed to where she could set them, not mentioning that lately they’d been trying to get rid of the donations they already had, because there were so few people to give them to. Just the day before, Gabriela had packed a car trunk full of canned green beans, tampons and baby food so a woman could take them across the border, to a shelter in Reynosa taking in people who have been deported there. Lately, that shelter had been nearly as busy as the respite center used to be.

The Post reports all this news like it’s deeply sad....which demonstrates they have been eager publicists for illegal immigration for many years now.