Aaron Klein of Breitbart Jerusalem reported that Pulitzer-Prize winning American novelist Michael Chabon rather desperately hates Donald Trump, In an interview on an Israeli radio show in Tel Aviv, he discussed how he woke up every day hoping Trump will suffer a “massive stroke” and be “carted out of the White House on a gurney.”

Chabon (pronounced Shay-bon) won the Pulitzer in 2001 for his novel The Amazing Adventures of Kavalier & Clay. He published his first novel The Mysteries of Pittsburgh in 1998 at the age of 25.

Pulitzer prize winner Michael Chabon: Every morning I wake up and hope that this is the day that trump is going to have a massive stroke pic.twitter.com/avZSHQfnoa

MICHAEL CHABON: I would love to hear anything you have to say about how to get rid of Donald Trump. I welcome your input.

GOEL PINTO: Tell me your view about your president.

CHABON: Every morning I wake up and in the seconds before I turn my phone on to see what the latest news is, I have this boundless sense of optimism and hope that this is the day that he is going to have a massive stroke, and, you know, be carted out of the White House on a gurney. And every day so far, I have been disappointed in that hope. But, you know, hope springs eternal. He’s an old guy, he doesn’t eat well, he’s overweight. He has terrible nutrition. He doesn’t exercise and it is that not that hard to imagine.

To old MRC hands, this sounds a lot like the PBS outburst by Julianne Malveaux in November of 1994 against Justice Clarence Thomas: "You know, I hope his wife feeds him lots of eggs and butter and he dies early like many black men do, of heart disease.” That wish didn't come true.

Pinto, who gasps in the video, told Klein he was surprised by Chabon's chilling remarks. “At the beginning, I was sure he was joking,” Pinto said. “But when I realized he was serious, I understood the harshness of his words, and how much America is divided.” Chabon did not return Breitbart requests for comment. 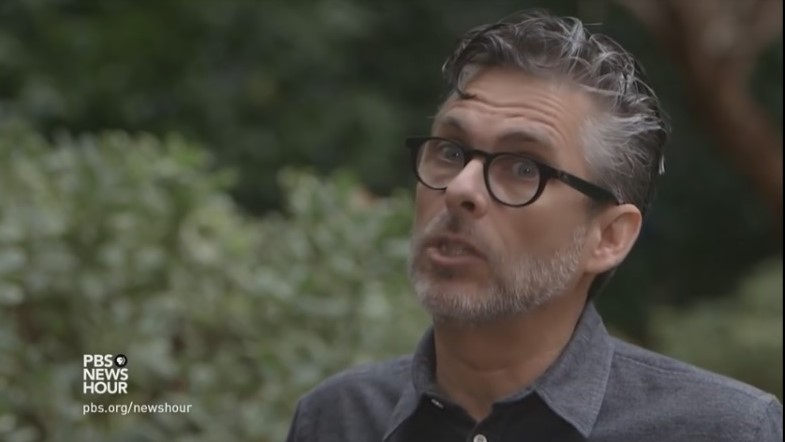 Chabon and his novelist wife are Obama fans. Ken Shepherd caught an Associated Press report in 2008 noted “Writers welcome Obama as a peer, a thinker, a man of words — his own words....Ayelet Waldman, whose novels include Daughter's Keeper, is an Obama fan dating back to when both attended Harvard University. Her husband, novelist Michael Chabon, came to support him through 'his writing, the quality of his prose,' Waldman says." The couple live in Berkeley.

In October of 2008, Chabon wrote an opinion piece on Obama for the leftist New York Review of Books titled "Obama & the Conquest of Denver." (He explained his wife was a Democratic delegate from California.) Chabon sounded like the mesmerized cable-news pundits: "Obama was a virtuoso, employing many different registers -- preacherly, plainspeaking, jocular, Lincolnesque -- to sound common notes, in a regular but loose-feeling progression, like a piece of [avant-garde jazz saxophone legend] Ornette Coleman harmolodics."