How would public broadcasting do the "Week in Review" after House Majority Whip Steve Scalise and others were shot on a baseball field in northern Virginia? Treat it like....something at the bottom of the list? On the PBS NewsHour, their 11-minute "Shields and Brooks" segment didn't get to the shooting until seven minutes of Trump obsession were over. It was worse on NPR's All Things Considered, arriving after six minutes elapsed of an eight-minute "Week in Politics" segment. If a Democrat were shot by a crazed Republican/Fox News fan, would they wait until the end?

But it gets worse. When the NewsHour arrived there, anchor Judy Woodruff couldn't even mention the shooter was a Bernie Sanders campaign volunteer, couldn't mention his favorite TV shows, and couldn't ponder if anyone on the Left could have provoked him with their outrageous statements. Instead, liberal analyst Mark Shields blamed it on Newt Gingrich, and his "clone" Donald Trump:

And this guy apparently had a list of people, according to what’s being reported this afternoon, of people he wanted to shoot. And so that’s weaponizing mentally disordered people through the process of political extremism.

JUDY WOODRUFF: Is this coming together at all, Mark? Do you see any enduring — any endurance of that, or is that just — is it just going to be a blip?

MARK SHIELDS: You hope, Judy, but to David’s point, both parties — according to Pew Research, in both parties, what drives the most activist wing is not support and energy and advocacy of their own side. It’s loathing of the other side. 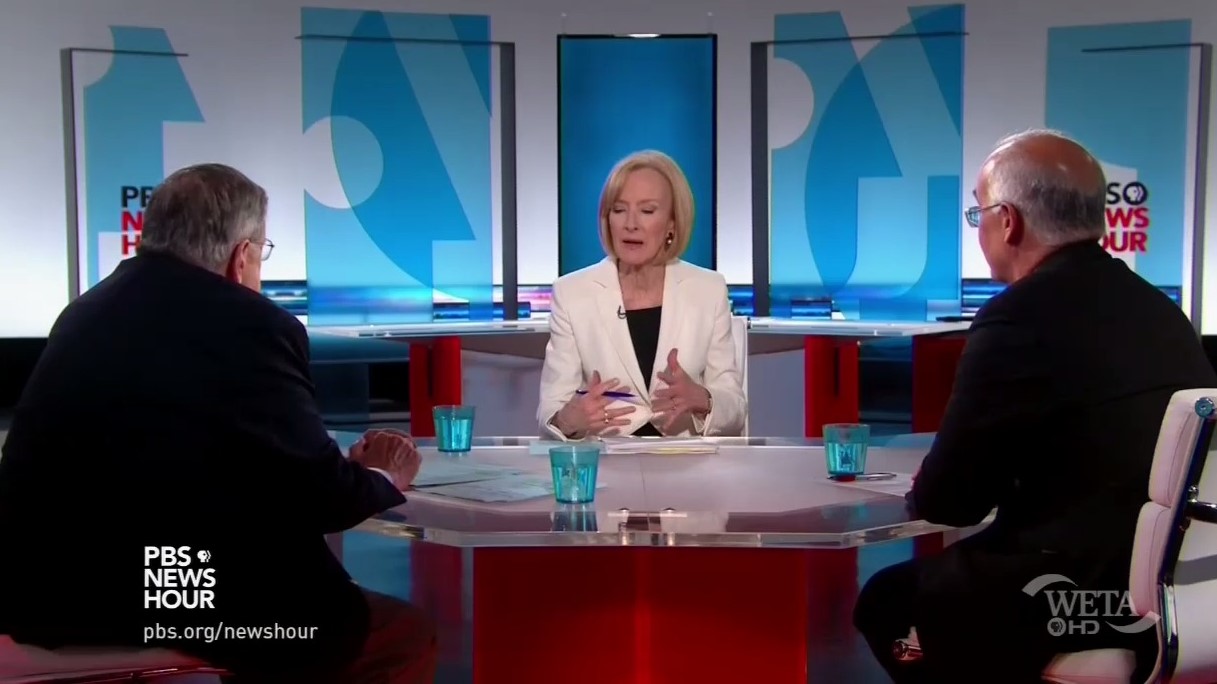 And that changed. And it changed. And one of the reasons it changed is that a man was elected from the state of Georgia who ran on the book, and the book was, you use these words. You use sick. You refer pathetic, traitor, liar, corrupt, shame, enemy of normal Americans.

This was Newt Gingrich’s Bible! It wasn’t an idea of a policy. It wasn’t a program. He used it and he became successful. He became speaker of the House.

Donald Trump is a clone of Newt Gingrich. Donald Trump used, Donald Trump, lying Ted, and lightweight Bobby Jindal, and Mitt Romney choked like a dog, and used that language.

And you’re right. The left has used similar language and there has been a response and almost a premium on going after Trump in the same sort of language. But there’s been no punishment. There’s no political downside for this tactic.

JUDY WOODRUFF: Just 45 seconds. Is one side more responsible than another? And are we going to see any of this coming together last, or is it…

DAVID BROOKS: Yes, to me, in 1970, people were asked, would you mind it if your son or daughter married someone of the opposing party? And five percent would mind.

Now 40 percent mind, because people think your political affiliation is a sign of your worth, your values, your philosophy, your culture, your lifestyle. It’s everything. All of a sudden, we have been reduced to politics and we have made politics into the ultimate source of our souls.

Newt's "Bible" is a memo his political action committee GOPAC put out in 1990, and the Left never forgets. But that is terrible history. The Left started bombing the Capitol and the Pentagon and sang "Hey, hey, LBJ, how many kids did you kill today?" And Shields starts the civility clock in 1990?

This chat takes place weekly at WETA-TV, whose studios in Arlington are about 3.5 miles away from the scene of the crime....and they still yawned. If the shooter had come to a TV studio, that crime news wouldn't have waited until Minute Seven.

NPR anchor Ari Shapiro also steered entirely around the left-wing shooter in his questions to David Brooks and E.J. Dionne:

SHAPIRO: I want to end with a moment of unity and civility that Washington saw this week tragically created by a gunman who shot Congressman Steve Scalise and three others at a Republican baseball practice. Last night at the Congressional Baseball Game, House Speaker Paul Ryan and Minority Leader Nancy Pelosi spoke with CNN about ways to bridge partisan divides. David, do you think this is likely to last?

SHAPIRO: E.J., if you were to write a prescription for solving this problem, what would it include?

It might include analyzing why a man would target Republicans for death, but PBS and NPR find that to be a boring and somehow bipartisan topic.