WashPost Whitewashes ISIS, Mateen Out of Its Orlando Mass-Shooting Remembrance

The Washington Post marked the one-year anniversary of the horrific Orlando nightclub mass shooting on Monday, but something was repeatedly missing in the coverage: the name of the shooter Omar Mateen, and his ideological inspiration, the Islamic State.

On Monday’s front page, they promoted Sunday’s “Equality March” by the gay Left: “It was at times celebratory and at others somber as participants gathered to commemorate the anniversary Monday of the worst mass shooting in U.S. history at an Orlando gay nightclub a year ago. Those touched by the shooting have worked to heal, raising money for the victims and organizing politically.” 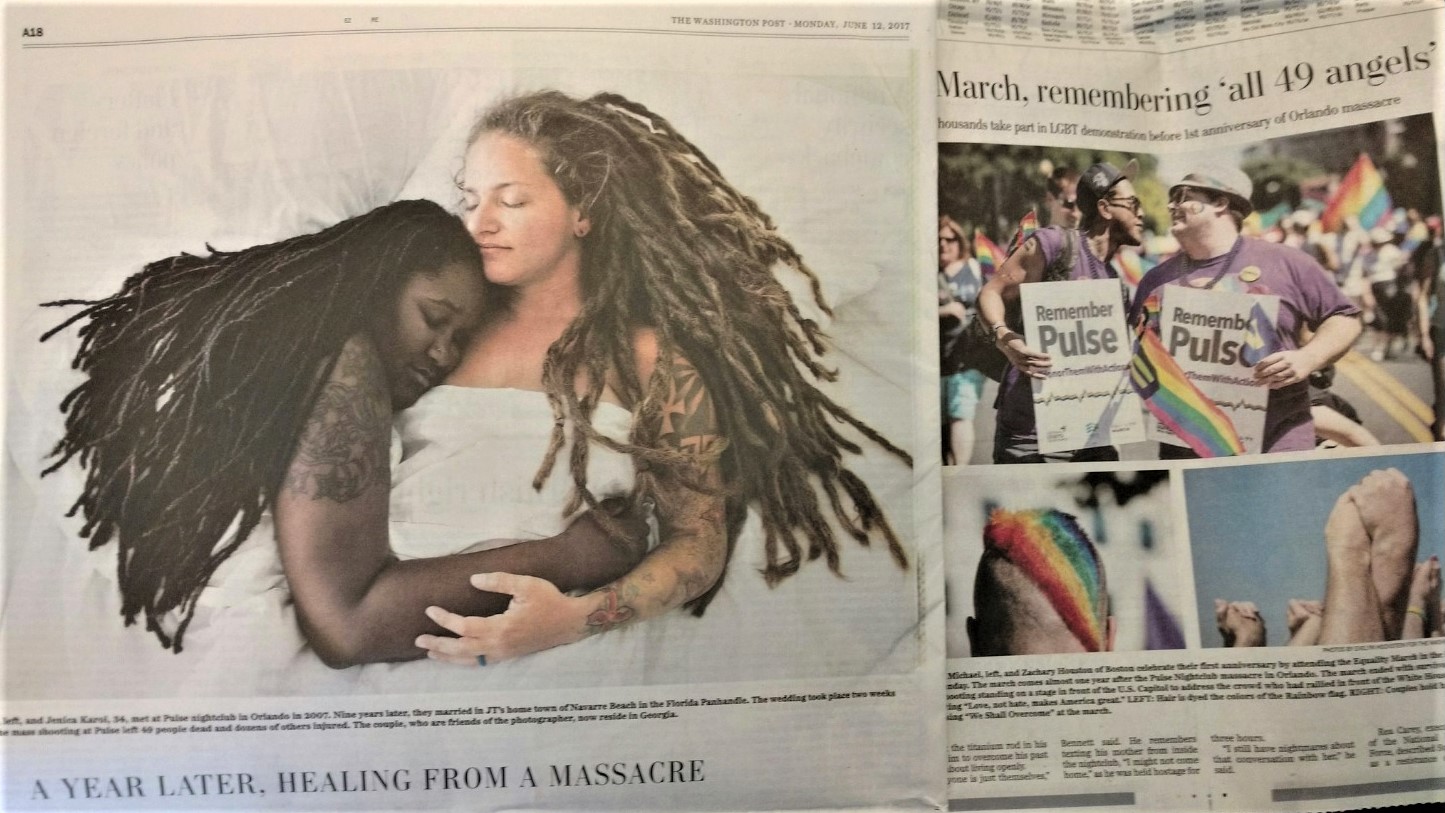 On the back page of the A-section, they published an entire page of four color photos under the theme “A Year Later, Healing From a Massacre.” There was only a paragraph of text on “the deadliest mass shooting in modern American history,” but no Mateen or ISIS.

(One photo promoted Rev. Terri Steed of the Joy Metropolitan Community Church, who preached the LGBT “gospel” that “Jesus went to those on the margins. Jesus went. He said he came to preach to the poor, to reach the outcasts, to set the oppressed free.”)

On the back of the Metro section was a story all across the bottom half with three color photos under the headline “At Equality March, remembering ‘all 49 angels’ of Pulse: Thousands take part in LGBT demonstration before 1st anniversary of Orlando massacre.” Reporter T. Rees Shapiro used the same template as the front-page blurb,with no Islamic State mentions.

The same weird practice was apparent on the front of Saturday’s Style section. The big headline was "A Poignant Point of Pride: For this year's LGBTQ community celebration, the Human Rights Campaign wears 49 ribbons, one for each life lost at the Pulse nightclub." Caitlin Gibson wrote "Monday will mark the first anniversary of the deadliest mass shooting in American history -- a horror that unfolded in a popular Florida gay bar that had been a cherished place of safety and acceptance for a marginalized community."

Since Gibson and the Post were acting as publicity agents for the Human Rights Campaign lobby, they skipped over Mateen and warned the anniversary came "amid a political climate that seems particularly fraught for the LGBTQ community -- President Trump was notably silent when Pride month began on June 1, breaking with President Barack Obama's tradition of issuing a formal proclamation." Trump is more notorious?

A Monday “Morning Mix’ item online by Katie Mettler at least allowed the name “Omar Mateen” in it, but only once, to note when during the night that deadly attack began.

Other papers at least mentioned the Islamic State. In a front page USA Today story it came right in paragraph 3: “Miguel Honorato was one of 49 people shot to death June 12, 2016, when a gunman inspired by the Islamic State stormed into Pulse, a gay nightclub.” Deep in the USA Today story, they reported Orlando mayor Buddy Dyer “worked to quickly tamp down anti-Muslim sentiment, to ‘dispel any anger that might be directed toward the Muslim community. We immediately started talking about it as the act of a single person and not reflective of a religion or an ethnicity.’”