Fortune magazine reports that advertisers are being pressured by left-wing groups to drop their advertising on Sean Hannity's Fox News program, and at least five have complied with that campaign. But the obvious odd bird on that list is USAA, founded by Army veterans almost 100 years ago. This company's brand is all about support for veterans....and they're turning on Sean Hannity?

For years, Hannity has donated his time and his celebrity to promoting "Freedom Concerts" to raise money for the Freedom Alliance, which gives scholarships to the children of slain soldiers. Is that really the way the USAA demonstrates its support for veterans?

In a Twitter response to a series of USAA members on Wednesday night, the company's @USAA_help account  tweeted: "Thank you for reaching out to us. Advertising on opinion shows is not in accordance with our policy and we’ve since corrected it." That's fascinating, since even last night, USAA advertised on Hardball on MSNBC, and how does the Chris Matthews record on helping military families match next to Hannity's? 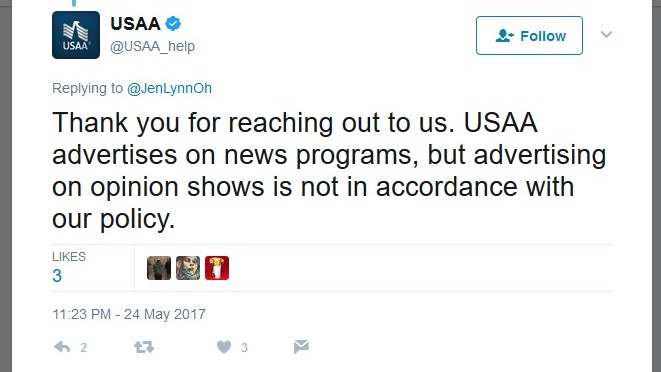 USAA members are telling the company they shouldn't back down to left-wing pressure campaigns, and they get the generic "thanks, whatever" tweet in return.

A quick search of our recent recordings shows that USAA advertised routinely on cable news channels, so then you can wonder what their "policy" is? Do they somehow think Hardball is not an "opinion show"? Is Chris Cuomo yelling at Republicans on New Day a "news program"? Advertisers can't just claim they're not supporting wild partisan opinions and hope no one notices that their claims of a "policy" aren't true when you watch TV.

Here's video of a USAA ad on MSNBC's Hardball With Chris Matthews on May 24: