On Tuesday night, the leftish PBS documentary series Frontline aired a documentary titled “Bannon’s War” which seemed awfully reminscent of their anti-Cheney documentary suggestively titled “The Dark Side.” If you’re not a liberal PBS fanatic, it was another boring and predictable slog, attacking Bannon and Trump with lots of black and white photos and scary-sounding orchestral music.

It was more eye-opening to see the Frontline director and writer Michael Kirk appearing on C-SPAN’s Washington Journal to promote his anti-Bannon film on Tuesday morning, where made a flat-out false statement about Bannon’s resume, saying “He’d never been in the military.” What? Even Kirk's attack film discussed Bannon’s seven years in the Navy. But this is what Kirk said on C-SPAN:

PEDRO ECHEVARRIA: He’s listed as a chief strategist, but you saw what happened the first time around, when the Republicans introduced health care, you saw the travel ban, legal challenges, did that bruise Steve Bannon in a sense?

MICHAEL KIRK: I can’t imagine that it did not. You also didn’t mention that Trump, after the CPAC and all the headlines and the Saturday Night Live, also removed Bannon from the National Security Council, where he really didn’t belong based on his credentials. He’d never been in the military. He’d never had any national security clearances or anything else, so it was a little odd that he was there, but he was removed unceremoniously.

KIRK: Bannon’s philosophy has been chaos and disruption, and that worked very well to get Trump elected. They came promising they would break the administrative state, they would create chaos and disruption all over Washington, they would drain the swamp, and I think when it seemed to be working, Kushner was with him and Ivanka was with him for that time. But Bannon is a little like a Kamikaze, or Che Guevara to Fidel Castro. Those people don’t last very long once you assume the problems of governing.

This is where Kirk’s thesis broke down: he assumed Bannon would be thrown out by the time this film aired in May, and when it didn’t happen, they had to rewrite the script to meet reality. “I thought at the time we were finishing the film, I thought, well, we now have the end of our film, which is Kamikaze insurgent comes to Washington and works inside the government, lasts about a month.”

Kirk also referred to Bannon (and Jeff Sessions) as a surprising “super fringe group of people” who burrowed into the government. 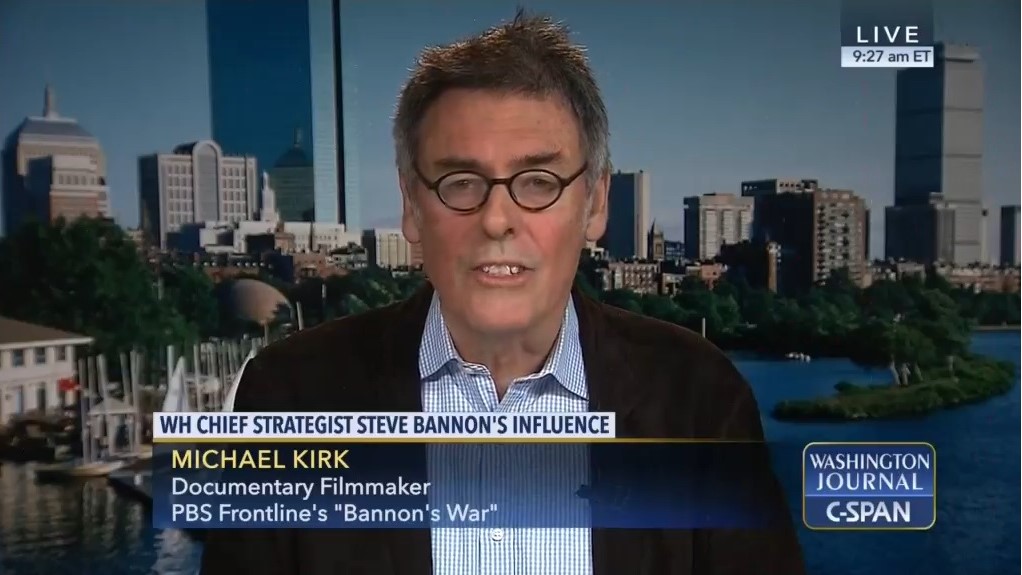 KIRK: I’ve been watching presidents since Jimmy Carter, and every administration has this fight. What most administrations have not had is the super fringe group of people like, and someone like Steve Bannon, who get you elected – but to stay inside the government and be vital inside the government in the West Wing is an extremely rare thing. Bannon brought three or four people – Jeff Sessions is the Attorney General, they were all a team once, and that is unusual in my view of White Houses. There are people in that Oval Office who were the former radicals, the outsiders, the fringe people who are in the West Wing! It’s interesting to watch and see how long they can last and how long they can withstand forces that have come on every sitting president, to get more to the center, to get more even to the globalist perspective the world is operating under and has been for a number of years.

And yet after all this left-wing Bannon-bashing, Kirk insists his PBS team is fair and balanced and upset Obama, too. (This may be true, because unlike Republicans, Democrats expect to be coddled by PBS):

KIRK: I think we probably made eleven films about the George W. Bush administration, the Iraq war, the torture issues, other things like that. We made eight films about the Obama administration, equally, I think touching raw nerves here and there. And here we are now making our second, really third film [on Trump]. We made a film called “The Choice,” which was the biography, the woven biography of Hillary Clinton and Donald Trump back last September. So this is the third film of what will probably be nine or ten or twelve films over the next four to eight years, depending on how long the Trump administration lasts. We’re here for serious, long-form journalism – the high road, the sort of 30,000 foot view, not above the fray of politics, but to get down in there are see how do all these dots connect?

I don’t think Steve Bannon or conservatives in general would think these attacks on Bannon can be called “the high road,” and it’s certainly not above the fray of politics. But this film got a thumbs-up from the lefties at Salon.com: "Nothing in this Frontline version of Bannon’s biography affords a glimpse of humanity or warmth in the man, and perhaps that is for the best."