After the House narrowly passed an Obamacare-repeal measure on Thursday, the leftist media memes launched some unreal "news." Jim Treacher at The Daily Caller caught Alexandra Jaffe at "Vice News" (previously with The Hill and NBC News) tweeting out this fact-challenged message yesterday: "The Republicans are repealing Obamacare because they want everybody to die, and now they’re celebrating with some crappy Bud Light!"

Within a half hour, this "journalist" reported oops, she had no idea what she was talking about! Treacher summarized: "Correction: Republicans are repealing Obamacare because they want everybody to die, and somebody else is drinking crappy Bud Light!" 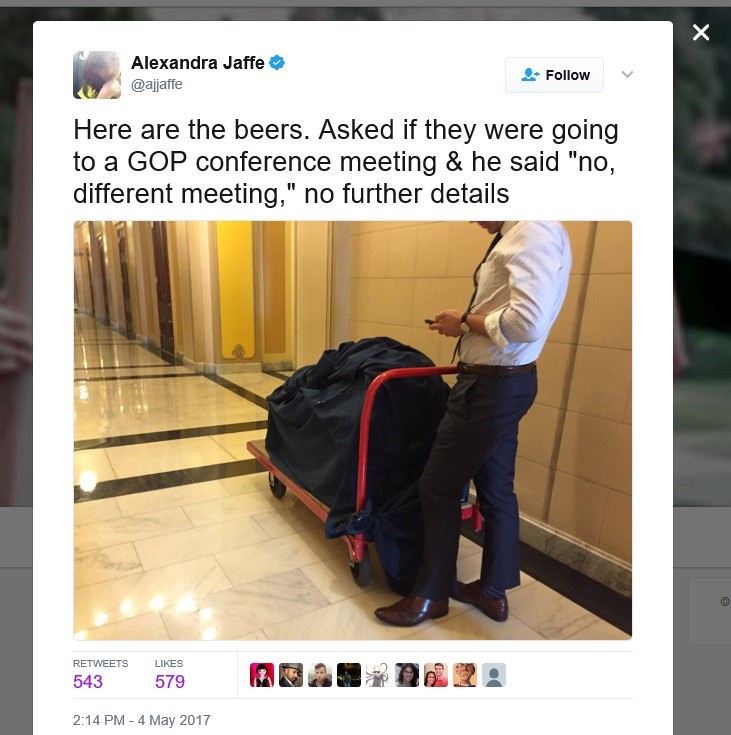 Treacher then noted a slew of leftist websites took this fable and spread it across the Internet. But how did they deal with it being almost immediately shot down after checking? Here's how Mic.com presented it: 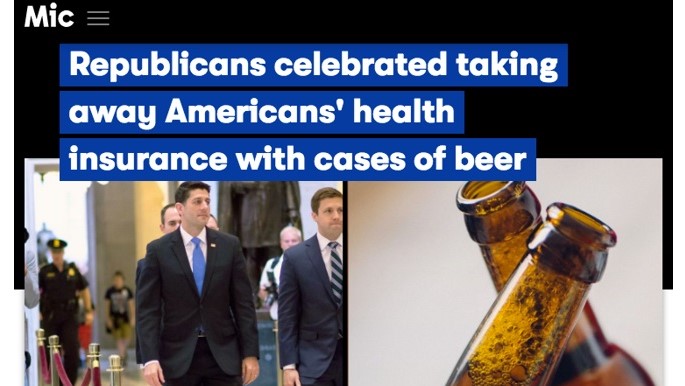 The story underneath by Matthew Rodriguez didn't add a "Correction." It only added Jaffe's second tweet without drawing any more attention to it! Underneath, the article still presents liberal Twitter rage as too good to fact-check: "Once word got out about the [ahem, fictional] beer bash, Twitter excoriated Congress for the show of levity on an issue that could potentially damage millions of American lives."

Curtis Houck reminded me that he noticed CBS also spread that fake news, as in this tweet that was featured in the Mic piece: 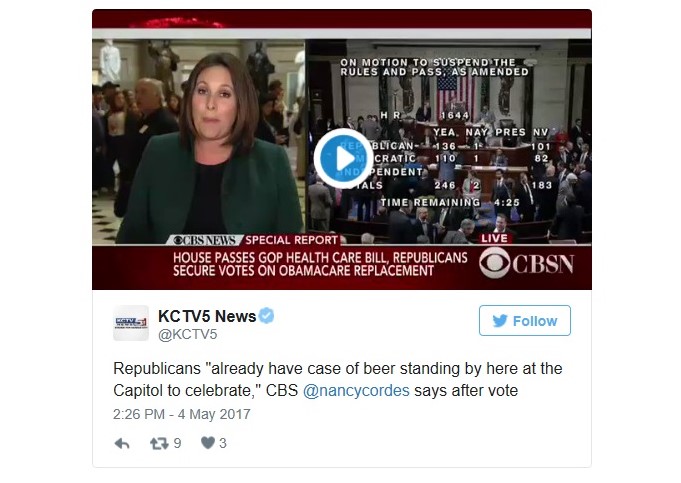 Here's some of the other website headlines Treacher displayed in addition to Mic, and how they have proven they are fake news or real news:

Salon: “‘Millions of Americans are about to lose Health Care coverage and the Republicans are drinking beer’ Democrats slam House GOP after passage of Trumpcare.”

Sophie Tesfaye never reported the Jaffe tweets, but just included a tweet from ultraliberal Rep. Rosa DeLauro that doubled as their headline. This isn't as fake, because some Republicans surely had a beer after the win.

Callie Beusman saved the fake news for the bottom, linking to the first Jaffe tweet (and no correction): "According to accounts from reporters in D.C., it seems that Republicans will celebrate the passage of the bill by drinking cartloads of beer." This is a bit more pathetic, since Broadly is a Vice website, so Jaffe should have called her colleague to fix it.

The headline remains. Apparently the "party bus" simply means House Republicans traveling to the White House, no verified bus beer. The story still concludes "Naturally, some of the cases were Bud Light, because God forbid the Paul Ryan brigade drink anything other than glorified water. Drink up, dicks. 2018 is right around the corner.​"

But Maggie Serota offered a bit of an Oops note underneath the clickbait headline with a "clarification" note on "deathcare" Republicans:

UPDATE, May 5: Vice’s Alexandra Jaffe clarified that she could not confirm if the beers were actually drank by Thursday’s deathcare caucus. Tweets embedded below.

Raw Story: “Republican plans massive beer bash as they take healthcare away from women the disabled and the poor”

Brad Reed proved the website title! The story was "raw," including just Jaffe's first tweet and no hint of a correction. Total fail.

Politicus USA: "House Republicans Are Celebrating Taking Health Care Away From 24 Million With A Beer Bash"

Jason Easley deserves some sort of Worst of the Web prize for running THREE Jaffe tweets, but excluding the one that admits she was wrong. He did run a previous one admitting "In fairness I don't know where his was going. Just hopped on an elevator." At bottom he promised "(This post will be updated when/if more details emerge.)"

We don’t know who was getting all of that beer, but somebody is planning a party, and it is a safe guess that it is related to Republicans finally passing a bill that will take health care away from tens of millions of Americans.

Ryan Koronowski included both tweets, and then reported Jaffe "may have" been wrong! "[T]he celebratory libations may have been intended for another party, and the aide pushing the cart said the beer was headed elsewhere."

Bustle: “The GOP Is Reportedly Throwing a Party To Celebrate Taking Health Care Rights Away”

At least the headline has a "reportedly." Morgan Brinlee fully reported Jaffe's retraction, and then suggested there was a party, somewhere: "But party or no party (or drinks aboard a party bus), it seems beyond tasteless to celebrate legislation that stands to leave so many people without insurance."

This website actually republished the Brinlee piece from Bustle, compete with retraction. But the headline still revels in the fake news!

As drinking the blood of cancer victims would be gauche, Republican lawmakers are preparing to celebrate the House’s narrow passing of their new, Affordable Care Act-gutting bill by quaffing a few ice-cold Bud Lights out in the Rose Garden. “Cases upon cases” of Bud Light—a thin, watery gruel that presents itself as a better, more patriotic version of something you actually prefer, but really just leaves you feeling like shit—were spotted being rolled into the Capitol this afternoon, moments before the bill passed at 217-213.

The silliness of this exercise is that one can easily imagine turning this back on the Left: "Obamacare passes, Democrats get cases of beer as premiums go through the roof." But then, nobody on the Left predicted that, and they always predict Republicans are imposing cruelty and death. Or: "Democrats party after killing Osama bin Laden." Salon might have actually run that one....