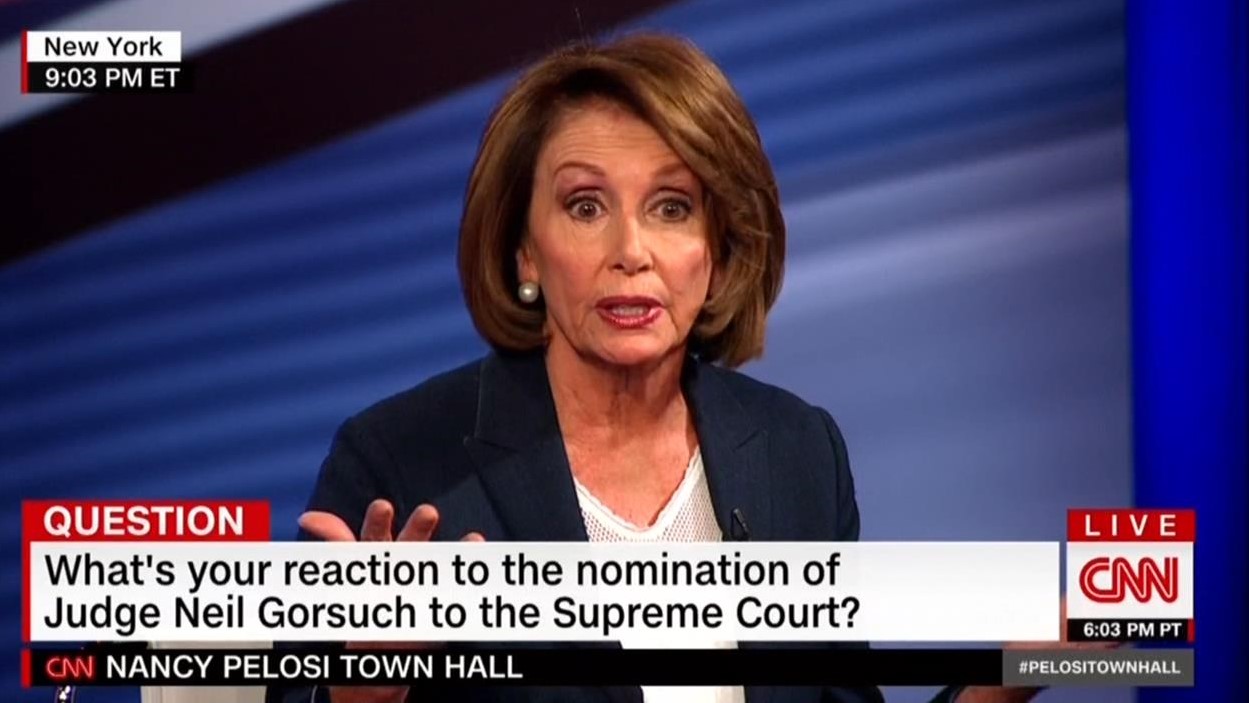 CNN – starting with its media correspondent and Reliable Sources host Brian Stelter – has boldly declared that the media cannot tolerate politicians like President Trump making wild overstatements without challenging him on the facts. So why didn’t CNN challenge House Minority Leader Nancy Pelosi last night on her smear of Neil Gorsuch in an hour-long town hall program?

Host Jake Tapper asked for her take on the brand-new Neil Gorsuch nomination to the Supreme Court, and she made a wild overstatement: “If you breathe air, drink water, eat food, take medicine, or in any other way interact with the courts, this is a very bad decision.” What? Excuse me? Wouldn’t it seem natural to ask Pelosi how precisely it is that Gorsuch opposes air, water, food, and medicine? She uncorked this line twice.

Tapper allowed the slanders, and casually moved on to the hot question inside the Democratic Party bubble: allow a vote, or filibuster for four years? So much for checking facts or hyperpartisan rhetoric. Here's how the smear slimed across the screen:

PELOSI: What I do want to say about this is that elections have ramifications. And here is a living, breathing example of it, the president and his first appointment to the court, and hopefully his only appointment to the court, has appointed someone who has come down on the side of corporate America versus class action suits, on securities fraud, he's come down against employees' rights, clean air, clean water, food safety, safety in medicine and the rest. If you care about that for your children, he's not your guy.

Gabby Giffords’ group, the group for responsible solutions relating to gun safety, said that he comes down on the side of felons over gun safety. Hostile to women's reproductive rights. Hobby Lobby case, for example. The list goes on and on. Criticized progressives for bringing cases that relate to LGBT progress, taking those cases to the court.

What saddens me the most as a mom and a grandmother, though, is his hostility towards children in school, children with autism. He has ruled that they don't have the same rights under the IDEA [Individuals with Disabilies Education Act] that children -- that they could reach their intellectual and social advancement under the law. He has said that doesn't apply to them. He's come down against them under the ADA, as well, and again under IDEA.

So it's a very hostile appointment -- hail fellow, well met, lovely family, I'm sure. But as far as your family is concerned, and all the -- if you breathe air, drink water, eat food, take medicine, or in any other way interact with the courts, this is a very bad decision. Well outside the mainstream of American legal thought. Not committed to Supreme Court precedents, Supreme Court precedents.

Tapper signaled it was time to move on, except for a process question for all the Pelosi fans watching CNN at home:

TAPPER: I want to get to the questions, but I just want to do a quick follow with you, which is there's a big division in the Democratic Party right now about whether or not Judge Gorsuch should be treated the way that Supreme Court nominees normally are or turnabout is fair play, given the fact that Republicans would not even hold a hearing for Merrick Garland, President Obama's pick after the Supreme Court vacancy roughly a year ago.

Where do you come down? Should Democrats allow hearings? Should they allow Judge Gorsuch a vote on the Senate floor?

It should be noted that Tapper’s town hall guests came from all over the political spectrum, and some had very tough questions for Pelosi. FoxNews.com picked up on a mother who testified her son had been "tortured," "tied up like an animal," and set on fire by an illegal immigrant in 2010. "I am not a one-story mother. This happens every day because there are no laws enforcing the border," she said. "How do you reconcile in your head about allowing people to disavow the law?"

But CNN and Tapper failed to seek any evidence for the notion that Neil Gorsuch opposes air, water, food, and medicine. Tapper may have wanted to move the program along to the audience questions, but it demonstrated a failure to hold Pelosi accountable on the hottest story in the news cycle. This morning, the networks played the Pelosi smear clip on Gorsuch, also without challenge to its facts or its manners.

CNN gets far more upset over President Trump attacking them for far less, calling them “Fake News.” We can only imagine how many times Jim Acosta’s head would explode if Trump accused him of opposing air, water, food, medicine, gun safety, and autistic children. Failing to challenge leftist character assassination will earn you the title of fake news network.