People magazine has celebrated the two Barack Obama inaugurations, but they clearly loathe Donald Trump. In the February 6 edition, there's only a tiny mention on the cover of a "special report" on "The Inauguration & Women's March." Inside the magazine on pages 52 and 53, there's a full-page picture of President Trump with a fist raised and a full-page picture of the Women's March (with a prominent sign "Dissent Is Patriotic.")

The headline was "A Nation Divided: Unprecedentedly  unpopular and proudly impolitic, Donald Trump moved into the White House one day -- and faced a massive pink-hatted revolt in his new backyard the next." In the upper left-hand corner was a third headline: "The Inauguration of a President / The Rise of the Resistance." Apparently, People sees itself in the second half. 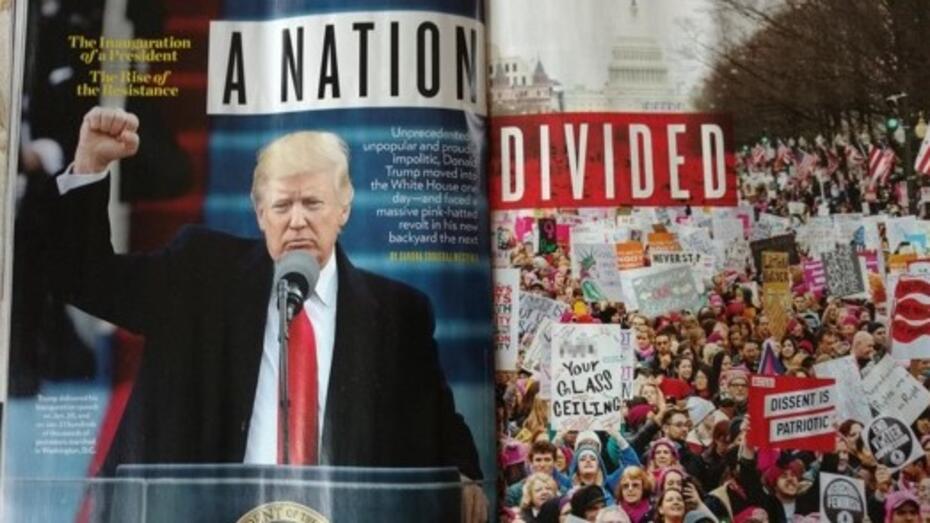 All told, the Trump inauguration was only covered on two pages, while the Women's March was covered on four. One page was devoted to global chunks of the Women's March, with the text "THE WORLD RESPONDS: On every continent, citizens walked in solidarity with U.S. protesters, making the march one of the biggest protests in history."

People also celebrated Natasha Stoynoff with a photograph and caption: "The former People writer who revealed last fall that Trump has physically attacked her during a 2005 interview (which he denied) marched in Toronto."

Even the inauguration page made space for the Left. The text in this "Special Report" (more accurately a "Special Collage of Photos") was a single column. Here's how reporter Sandra Sobieraj Westfall began:

For the hundreds of thousands who stood on the National Mall – many in “Make America Great Again” caps – the Jan.20 Inauguration of Donald J. Trump was happy history: the brash businessman come to deliver on his promises to bring back jobs, fortify borders and never take a backseat. "From this day forward," the new President vowed, it's going to be only America first."

But for the millions more who flooded D.C. – and other cities on seven continents – the next day, Trump’s rise from womanizing reality-TV star to leader of the free world was cause for fear and outrage. Wearing pink cat-eared caps and toting signs, men, women, and children protested a president who traffics in insults (against Mexicans, women, the disabled), discounts conflicts of interest, lost the popular vote by 2.9 million and takes office with the lowest approval rating of any Commander-in-Chief in four decades. To them, historic moment felt more like hostile takeover.

In the lower left-hand corner was a picture touting "HILLARY CLINTON STANDS TALL." Oh, how People wanted that inauguration instead.

"On Friday I went to Washington to honor democracy and its enduring values," Clinton (at the Inauguration) told People. "On Saturday we watched women and men across the country and the globe stand up, speak out, and peacefully march for those values with one voice. It was awe-inspiring. We have to keep up the momentum. I will never stop believing in this country and our collective future. We are still, and will always be, stronger together."

That's 70 words of Hillary's inaugural address. People only gave Trump 11 words from his actual inaugural address. "From this day forward, it's going to be only America first." They also left out "womanizing" and "conflicts of interest" from the Clintons.

Trump inaugural performers (from the swearing-in or the inaugural balls) received no pictures, but on page 12 the "Star Tracks" section featured an inauguration-night "Concert for America" by the liberals. "Broadway's biggest stars performed a concert on Inauguration Day to raise money for organizations dedicated to protecting civil rights, women's health, and the environment." Liberals can never be honest and just say it was a liberal concert raising money for liberal causes: "Planned Parenthood, Southern Poverty Law Center, National Immigration Law Center and the Sierra Club Foundation.​"