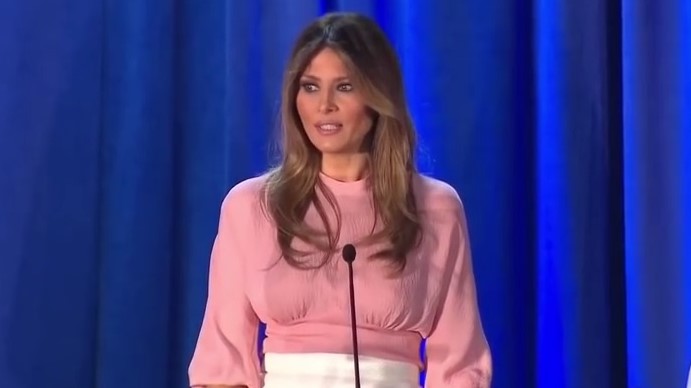 Robin Givhan, the liberal political columnist who plays fashion writer at The Washington Post, dominated the front of the Style section on Friday with a question: Can a fashion designer in good conscience agree to dress Melania Trump? Givhan argued that blacklisting the new First Lady is a good way to show a social conscience. The Trumps can buy off the rack, so it’s not really a blacklist.

The subheadline explained: "When it comes to dressing the Trump women, a designer's most natural vehicle for protest -- and patriotism -- is the absence of their name." Would it be "patriotism" if a designer refused to dress Michelle Obama? Perish the thought. Givhan said dressing the First Lady – especially for Inauguration Night, has always been an honor, until Donald Trump inspired “new waves of racism and violence.”

But this election cycle, nothing is as it has always been. President-elect Donald Trump ran a campaign that framed immigrants, minorities, women and Muslims as “other,” inspiring new waves of racism and violence. Whether to associate with him has become a moral question. Performing during his inauguration, marching in his parade and attending his swearing-in ceremony are all decisions that have caused personal and public soul-searching for people in the public eye.

And so, catering to his wife quickly became an ethical dilemma for designers. Would doing so signal tacit approval of her husband’s scorched-earth tactics?

Givhan notes that the dominant ideology in fashion is the Left, but she doesn’t ask how courageous it would look then to refuse to help the Trumps? She’s driving the Refusal Train:

Shayne Oliver of Hood by Air injects his views about gender, sexuality, race and disenfranchisement into his often inscrutable collections. Brandon Maxwell has described his fashion point of view as rooted in his experience growing up “very gay in a very small town” in Texas, finding solace in the strong women who surrounded him. Jacobs injects his work with the many pop culture references that inform his world and has used his design talent to support Hillary Clinton. Kerby Jean-Raymond has made his Pyer Moss label a tool for social protest, commenting on police violence and the Black Lives Matter movement through fashion.

For all these designers, their clothes are commodities, certainly, but they also have an artful point of view that is distinctly personal. That is part of what distinguishes their brands. Fashion does not have to be partisan to be political. It can be concerned with the public affairs of a country, worried about the state of its citizens — engaged.

Critics of those designers who’ve voiced their reluctance to dress the new first lady have maintained that it’s a designer’s job to simply make clothes — that they should keep personal opinions out of it and not pass judgment on people who wear their clothes. But over time, society has demanded much more from the fashion industry. It expects Seventh Avenue to be cognizant of its impact on young women predisposed to eating disorders. It rallied against the industry’s lack of diversity. It has pressured the industry to concern itself with the labor practices of its subcontractors and to create clothes that empower women instead of objectify them.

Society expects fashion to be philanthropic and awake to the world in which it exists. So doesn’t taking a stand on a new administration and its policies — in the most direct manner possible — fall into that category?

Givhan implicitly argues against the conservative pushback without being forthright: So a Christian baker has to make a cake for the gay wedding, but the gay fashion designer can refuse service to the President of the United States? It’s not the same, she argued:

Anyone with disposable income can buy a designer’s wares at retail — and even some red-carpet celebrities choose to do so. Hayden Panettiere purchased a Tom Ford gown for the 2014 Golden Globes. For the 2016 Globes, Bryce Dallas Howard picked up her Jenny Packham gown at Neiman Marcus.

That’s why declining to dress a celebrity is not the equivalent of refusing service. In doing so, designers would in fact be refusing a favor, with all the publicity that goes along with it.

What about patriotism? Should personal feelings and personal satisfaction be put aside out of respect for the symbolism of the first lady? Not necessarily. Protest that grows out of a desire to make the country better, to push it to live up to its ideals, is surely a form of patriotism….for those designers for whom fashion serves as their voice in the world, they should not feel obligated to say something in which they do not believe.

Givhan and the Post are also overlooking the way that the liberal media used -- overused -- Michelle Obama's rapport with the fashion industry as part of her propaganda juggernaut. Leading that political parade was...Robin Givhan, a year behind Mrs. Obama at Princeton. Here's a typical Michelle swoon by Givhan from 2009: 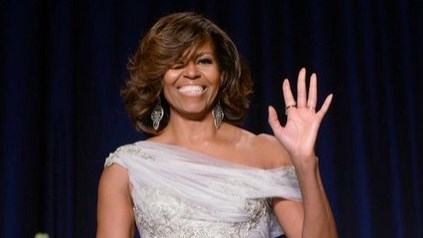 She serves as a symbol of middle-class progress, feminist achievement, affirmative-action success and individual style. And she has done all this on the world stage...while being black.

Time and again, observers grasp for adjectives to describe Obama's combination of professional accomplishment and soccer-mom maternalism. It's no wonder so many eye her with awe and disbelief. Or why a minority still view her with suspicion. There have been few broad cultural precedents for what she represents...

In a culture in which every white woman is presumed to be Everywoman until proven out of the mainstream, Obama has brought the normalcy of black women into the broader social consciousness. All it took were her two Ivy League degrees, a six-figure boardroom salary, a Norman Rockwell family, soccer-mom bona fides and an ability to dress herself without the aid of an entourage.

In many ways, the first lady has made people see -- really see -- black women for the first time. [Italics hers.] or example, when a black model appeared on the May cover of Vogue, news articles credited the "Obama effect," ignoring the concerted lobbying by fashion industry activists that began long before Barack Obama was even a presidential contender.

So Givhan has been "patriotic" in championing Mrs. Obama for many years now. As I wrote back then, "The Post and Givhan also seem unaware of how this gooey prose about Michelle's perfection can really sound like the mandated meringues of a state-run newspaper in a airless dictatorship."

Earlier: Robin Givhan rips into 'icy' Ivanka Trump as a study in privilege and avoidance