Movie Critic Loses It Over Obama Farewell: I Want to Grab His Pant Leg and Tell Him Not to Go!

Movie critic Frank Scheck of The Hollywood Reporter offered a rave review of President Obama's farewell address on Tuesday night, hailing it in the headline as "One Last Reminder of What Presidential Looks Like." Donald Trump is all "schoolyard taunts" for white people in "silly hats," while Obama is so terrific that "Watching him walk off the stage made you feel like a child desperately holding onto a father’s pants [sic] legs to try to prevent him from leaving the house." 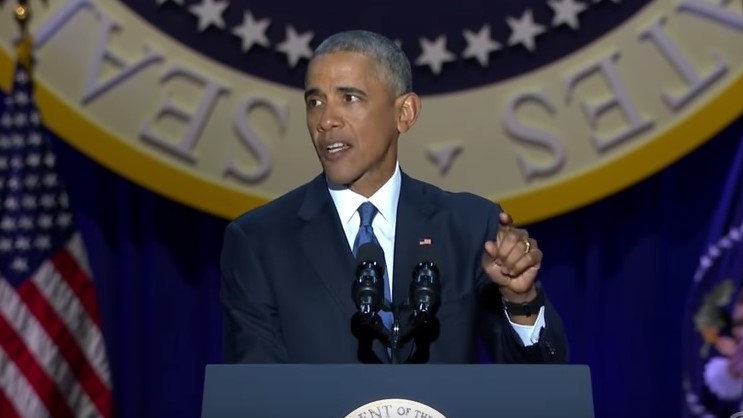 President Barack Obama delivered his farewell speech to the nation in Chicago Tuesday night, and it’s safe to say that the nation — or at least more than half of it — was made verklempt.  [The other half was nauseated.] Powerful, thoughtful and, despite everything that’s happened in recent months, inspiring, it was a valedictory address that made the quixotic chant of “Four more years!” that resounded throughout the arena at one point easily understandable.

The president has been a study in grace since the election, especially as contrasted to you-know-who, who despite his victory has mostly concentrated on spewing endless Twitter rants against enemies both real and imagined. Obama's speech was a potent reminder of the eloquent oratory of which we’ll be deprived in the coming years, as opposed to the grade-school-level rhetoric and school-yard taunts that will soon (shudder) be emanating from the Oval Office.

From the beginning, it was easy to tell that this wasn’t a Donald Trump rally, since the crowd actually included people of color, and nobody was wearing silly hats. Upon coming onto the stage, Obama received such a rapturous reception that he had to chide the audience to sit down.

“We’re on live TV here, I gotta move,” he reminded them.

This sounds like a parody of media fawning over Obama....but then so does so much of the Obama-loving media. But the line about grabbing on to Obama's pant leg is just priceless:

“I’m more optimistic than when we started,” declared Obama, and it was then that you fully realized that he was transitioning from commander in chief to therapist in chief.

“It has been the honor of my life to serve you. … I won’t stop,” he assured us, invoking the slogan that accompanied his ascendancy to the presidency: “Yes we can.” Except this time, he added, “Yes we did.”

It was exactly the hopeful, comforting and responsible address that so many frightened and anxious citizens needed to hear right now. Watching him walk off the stage made you feel like a child desperately holding onto a father’s pants [sic] legs to try to prevent him from leaving the house.

Like a typical fan-club member, he ended the review with screen captures of official POTUS and FLOTUS tweets.

PS: Scheck is such a leftist that he praised the box-office flop Michael Moore in TrumpLand. It “earns points for ultra-timeliness and its admirable attempt to raise the level of discourse in this deeply polarizing election.”

Raising the level of discourse? This is Scheck’s own description of Moore discussing Hillary:

Moore has his own nice thing to say about her: "I'm glad she killed Vince Foster," he announces to startled laughter. He proceeds to lampoon the many conspiracy theories that have sprung up about Clinton's supposed trail of bodies, referencing one internet site claiming that the candidate has been involved in the deaths of 46 people. Enthusing over her "badass" credentials, Moore crows, "ISIS is gonna shit if she's president!"