Washington Post media reporter Paul Farhi dug into the Baltimore-based Sinclair Broadcast Group to warn of conservative pro-Trump bias. The headline at the top of the Style section front page was “How a giant TV company helped Donald Trump's campaign.” It’s nothing like giant TV companies like, say, ABC, CBS, NBC, CNN, or (“not for profit’’) PBS. But pro-Trump bias is offensive inside the Post headquarters. The major networks demonstrating a pro-Hillary bias is just favoring compassion, intelligence, and diversity.

A hostile source inside Sinclair leaked internal e-mails to the Post. We can only imagine how much fun it would be to read internal e-mails from the Post (especiallywhen the managing editor was Kevin “I Love Obama” Merida). Here’s the “dirt” on Sinclair: 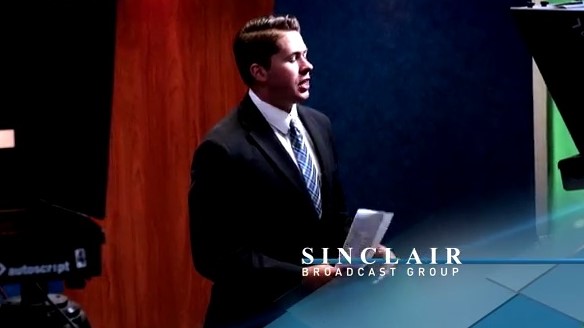 A “must-run” email from Washington managers to stations on Sept. 13 read this way: “DESCRIPTION: Why did Hillary Clinton struggle with disclosing her medical diagnosis? She has been repeatedly faced with previous questions of trust. Can a president lead with so many questions of transparency and trust?”

Another, from Sept. 8: “DESCRIPTION: Hillary Clinton showed up to talk about the responsibilities of being a leader at the commander-in-chief forum and the first question she took from the audience was about the email/server debacle. Clinton has repeatedly admitted it was a mistake, but 18 months since the first story broke and she’s still in the mode of damage control.”

Somehow these memos strike the Posties as outrageous. No one questions Hillary’s trustworthiness apparently unless they’re a crazy-eyed Trump backer. And what about this apparently outrageous order:

An October “must-run” story was a report about conservative activist James O’Keefe’s “sting” video in which two Democratic-affiliated contractors who were surreptitiously recorded discussed disrupting Republican events and mused about a voter-fraud scheme.

At the Post, Farhi accomplished a different goal in discussing the latest O’Keefe videos intended to expose Democratic malfeasance. He never came close to describing any detail of the actual videos. The entire story was about O’Keefe’s questionable tactics. Farhi briefly and vaguely passed over the scoop:  “This week, two Democratic operatives tied to Hillary Clinton's campaign lost their jobs after O'Keefe's organization, Project Veritas Action, posted secretly recorded videos of one of them apparently bragging about disrupting Donald Trump's rallies and speculating about how to conduct voter-fraud schemes.”

But Farhi went into specifics of a thorough vetting of Sinclair content: “A review of Sinclair’s reporting and internal documents shows a strong tilt toward Trump. Sinclair gave a disproportionate amount of neutral or favorable coverage to Trump during the campaign while often casting Clinton in an unfavorable light.”

Perhaps unsurprisingly, Trump gave 15 interviews to right-leaning Sinclair, while Hillary Clinton gave none. But Trump also gave the left-leaning Post a pile of interviews, and if memory serves, Hillary Clinton only gave two (one was to Anne Gearan in June, for ten minutes, and one in July to Jim Tankersley). So does that mean the Post tilted toward Trump?

Or put it the other way: if Trump never gave NPR or PBS an interview, does that prove they were in the Democratic pocket?

During one of the Carson interviews, Sinclair managers provided questions for local­station reporters to ask, such as “Dr. Carson, you toured Detroit, your home town, with Donald Trump Saturday. What will Donald Trump offer the African American community better than Hillary Clinton can?” And: “He has talked a lot about job creation. What will he do specifically to help employment among African Americans?”

How does Farhi think these questions are remarkably biased? They might not be hardballs, but they’re not kissing Carson’s ring. They’re bland and open-ended inquiries. It's nothing like Gayle King (from the "giant TV company" CBS) gushing to the Obamas about her favorite Obama inauguration photos.

PS: Farhi did mention some MRC research in the story:

Between Labor Day and Election Day, Trump attracted 308 minutes of reporting on the evening news broadcasts of ABC, CBS and NBC, compared with 194 for Clinton, according to the Tyndall Report, which has tracked the nightly newscasts since 1987. Not all of this attention was favorable: According to the conservative Media Research Center, the broadcast networks devoted 103 minutes to coverage and discussion of a 2005 recording of Trump bragging about assaulting women in the three days after the tape surfaced.