On Thursday's Tucker Carlson Tonight, Fox News host Tucker Carlson decried CNN Reliable Sources host Brian Stelter for insisting on his October 30 show that you should "triple check before you share" and then spreading on Twitter a YouTube hoax where prankster Adam Saleh claimed he was being thrown off a Delta Airlines flight merely for speaking Arabic. The airline and other passengers strongly disagreed with that attempted spin.

Carlson and Joe Concha, media reporter for The Hill, suggested Stelter was a left-wing advocate and Trump-basher and should just admit his biases and change the name of his show.

TUCKER CARLSON: I was a little confused by this because I'm familiar with who Brian Stelter is. I have known him since he was in college, actually. And he was the guy always jumping up and down about how other news organizations are irresponsible. And before you tweet something out, you ought to check and double check. That's journalism, double-checking, to make sure it's true. He seems like he had a hand in disseminating a hoax.

JOE CONCHA, THE HILL NEWSPAPER: Well, I have to correct you there, Tucker. Actually the quote is on one of his shows a couple weeks ago, "We need a new rule for the Web, triple check before you share."

Now if you do a 10-second Google search on who Adam Saleh is, this prankster that you just outlined, it would show that he does this sort of thing. He's a professional hoaxster and he has done this with airlines before. So the source is already highly questionable.

And when somebody like Brian Stelter sends out that sort of video, shares it without context as to who this person is, it gives the story legs. It gives it legitimacy, it helps it go viral more, and most importantly, it basically is hurting American businesses because trending on Twitter yesterday, Tucker, was #BoycottDelta.

You had celebrities like Olivia Wilde saying never fly this airline again. So, you know, I never quoted Winston Churchill on a cable news show before, I'm about to do it now. He said a lie can go halfway around the world before the truth even gets its pants on. So by Stelter sending this out, even if the story is debunked it's impossible to put the toothpaste back in the tube. This has already hurt Delta, maybe irreparably.

As MRC president Brent Bozell has insisted in recent months, CNN looks further to the left than MSNBC when it comes to politics and the belief that America is hopelessly bigoted. Carlson and Concha talked about how Stelter went overboard about "hundreds of swastikas" surfacing in America after the election:

CARLSON: So this is a guy who told that there were hundreds of swastikas being painted on buildings after Trump elected. This is a guy who spent a year flacking for Hillary Clinton. I was convinced he wanted to be her press secretary. How does he get -- that's fine. He's got a political point of view. He's a progressive. He's an activist. How does he get to pose as a media critic on a purportedly non-partisan news station? 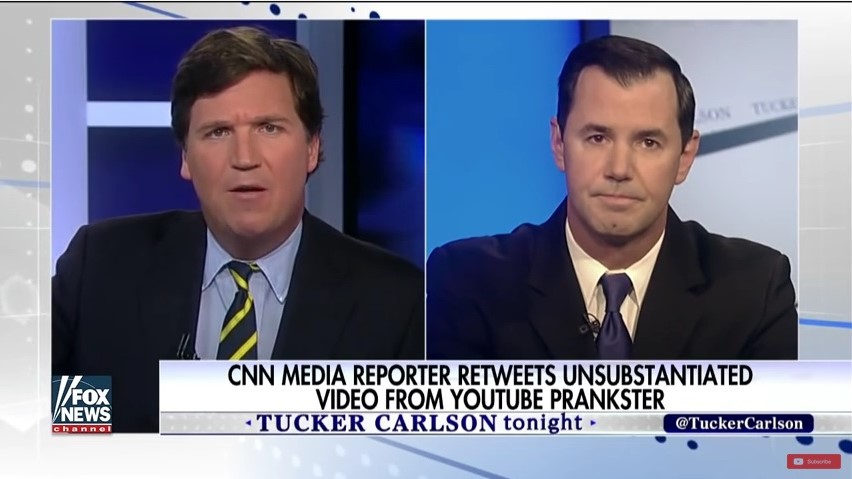 CONCHA: Yes. Well, let me give you that quote first, Tucker, because I found it remarkable. He said about Trump supporters six days after Trump was elected,"We are seeing hundreds of swastikas.”  Hundreds. “Racist language, harassment or in some cases assault or bullying across the country."

Now this has been disproved completely. No one can verify anything around hundreds of swastikas or hundreds of people getting beaten around the country. Did Brian Stelter apologize? No. Did he retract? No. Was there any accountability from management? No.

You have inmates running the asylum and that's the problem here. So, you know, I say a New Year's resolution, Tucker. Basically, journalists that purport to be straight news reporters like you had Kurt Eichenwald on last week. You proved him to be an advocate. Brian Stelter should do the same thing. Change the name of his show on Sundays from "Reliable Sources" to "Countdown with Brian Stelter" and say our mission is to call out conservative media bias while taking on Trump at every turn. And people will respect the fact that he is being transparent.

CARLSON: That's exactly right. It wouldn't bother me. It's like NPR if they would just stop pretending to be unbiased, I'd probably listen to it because at least it's honest.