Mollie Hemingway Speaks Truth to Facebook: 'PolitiFact Is a Joke'

Mollie Hemingway over at The Federalist has made a list of "5 Major Problems With Facebook’s Attempt To Limit ‘Fake News’." The most passionate argument was with PolitiFact.

The second problem listed was "PolitiFact is a joke. They should be trusted with nothing. They are the worst candidates to adjudicate fakery in the entire media establishment. Even among the disreputable 'fact' 'checking' class, they are noteworthy for their awfulness." They cannot be trusted with hard facts on Planned Parenthood. 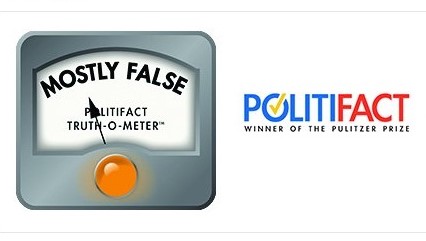 To reiterate, a guy saying a completely true thing about the zero mammograms Planned Parenthood does is rated the same as a guy saying it’s 97 percent of what they do. These are the people who will decide what’s fake or not?

It's also worth sharing number 4: "This Will Simply Increase Distrust to More Places."

Journalism professor Matt Waite wrote a great little prediction following meetings he took with top journalists about how to restore trust in news. It ended:

You won’t fix the belief that trust and fake news is Google and Facebook’s problems and not yours because…
You still don’t believe you’re the problem.
Wake me when you do.

The lack of trust in the media — the problem that only 6 percent of Americans feel they can truly trust the media — is not a problem of fake news. It’s a problem of the mainstream media, not a couple of random suburban hoaxsters trying to make a quick buck.

The more that the media tries to control information and seize back control over the spread of information, the more it seems like the media are in the interest of propaganda and agenda-pushing at the expense of facts. It won’t help the media gain trust at all. It will only give people more outlets to view with skepticism.