Lloyd Grove at The Daily Beast – a former gossip columnist for the New York Daily News and The Washington Post – chatted up CNN media correspondent (or “media cop”) Brian Stelter for a Wednesday article. Grove praised Stelter as a “frighteningly precocious workaholic,” but “precocious” usually describes a talented child, not a 31-year-old cable news host. 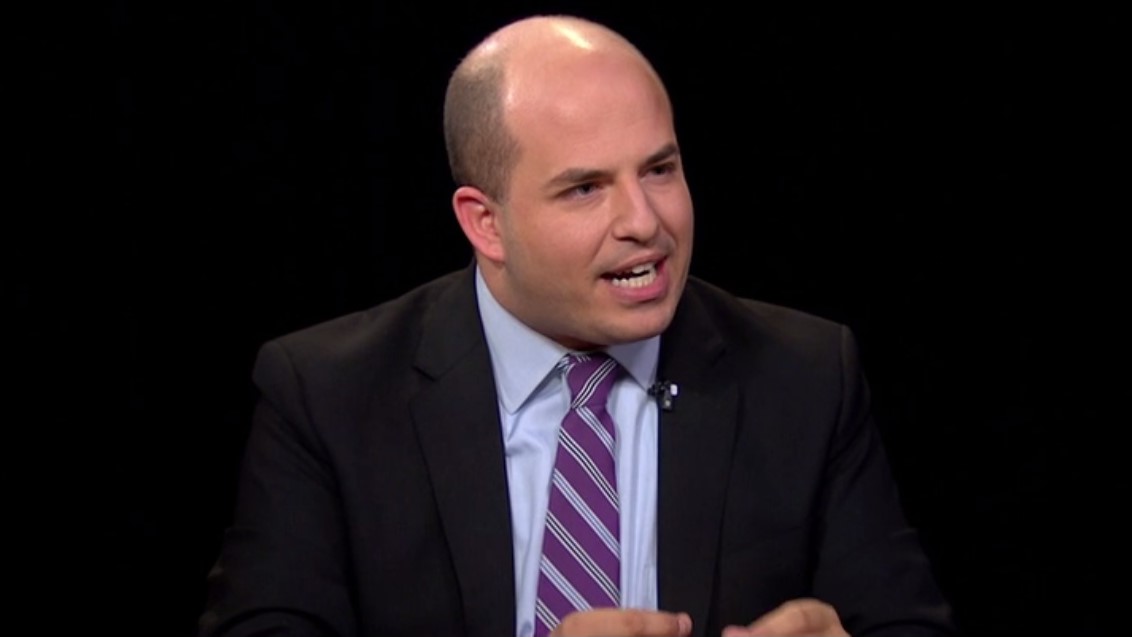 Stelter maligned Trump voters and supporters of Trump’s media critiques as anti-journalism: “A big part of the country has opted out of journalism and opted in to an alternate reality.”

Liberals always think that you either swallow the liberal media consensus whole, or you've "opted out of journalism." Why don't they understand conservatives are journalists? Could they acknowledge conservatives were tougher journalists in the last eight years?

No. Grove helpfully reprinted a piece of Stelter’s hate mail from a Trumper:

you are one nutty jerk. Still bitching that your favor candidate loose? Good. I am sick of you and your ilk who pretend to be a journalists. Your background says it all including your job at the Times. You are a worthless, sneaky and dangerous jew with an agenda. Go and f—k yourself !!!!!!!!!!

Grove did not put a Stelter critic on the record who doesn’t misspell basic words and who knows Stelter’s not Jewish. They like to print trolls as the alternative point of view. Stelter made excuses for Obama’s unprecedented record of prosecuting journalists, and attacked Trump instead:

Indeed, Stelter added, “Donald Trump ran an extreme anti-media campaign based on falsehoods, and if we don’t explain that, and if we don’t show that, then it goes unacknowledged and uncorrected.”

Stelter also predictably bashed Fox News in the usual Clintonista terms as a kind of super PAC instead of a news channel:

Stelter, who in the past has referred to Fox News as “a political operation,” continues to describe it as “a pro-Trump network.”

Grove also opted for the conventional wisdom about CNN’s 2016 scandals, which apparently only involve Trump aides and not Clinton partisans like Donna Brazile:

Stelter also rejected the critique, advanced by MSNBC’s Joe Scarborough among others, that CNN’s team of five media reporters—of which Stelter is by far the most prominent—tend to pull no punches in their coverage of competitors, especially MSNBC, but soft-pedal criticisms of CNN and its boss, Jeff Zucker.

“I’m thinking back to the best example from this year—the day Corey Lewandowski was hired,” Stelter said, referring to the sacked Trump campaign manager, a frequent adversary and occasional manhandler of reporters who Zucker recruited in June to be an on-air pro-Trump pundit. “When he was hired, there was no moment when we asked ourselves, ‘Should we write about this? What are we going to write?’ I just started writing.”

....Stelter said that as he was joining CNN, he considered whether it would be awkward to cover his own network, a central player in the media ecosystem. “And it hasn’t been awkward,” he said. “Viewers can tell when you’ve got autonomy in a story.”

Stelter added that he recently conducted “an autopsy on myself,” reading back through transcripts of his Sunday show. “I came away with a few regrets, but overall a lot of satisfaction and a lot of pride about how we covered candidates. I did not spend enough time covering Bernie Sanders. There were a couple of guests I wish I had on.”

Autonomy? When the story broke through Wikileaks on October 12 that CNN analyst/Democratic operative Donna Brazile had given Hillary Clinton’s campaign a “town hall” question, Stelter briefly mentioned it with guest Glenn Greenwald, and then said absolutely nothing on air about Brazile for three weeks. If that wasn't awkward, then he's not autonomous.