The New York Times released a full transcript of its on-the-record chat with the President-Elect, and while the liberal media sensed a "softening" of Donald Trump's campaign rhetoric, climate skeptics were pleased he brought up the "Climategate" scandal that liberals would rather forget.

Back in 2009, the Times refused to propagate revealing e-mails between climate-change activists (usually described merely as "scientists") acting very politically and manipulating their science because they were "acquired illegally." This was not the Times standard when someone (perhaps illegally) left the newspaper a few pages of Trump's tax returns.

The Times story on its meeting with Trump began with a trio of reporters insisting Trump "tempered some of his most extreme campaign promises, dropping his vow to jail Hillary Clinton, expressing doubt about the value of torturing terrorism suspects and pledging to have an open mind about climate change."

The transcript shows Trump gently expressed skepticism, and unlike liberal reporters, worried out loud about the effect of a climate crackdown on American competitiveness. 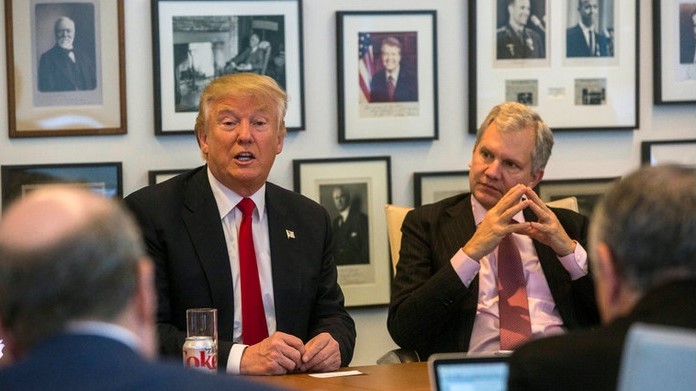 THOMAS L. FRIEDMAN, opinion columnist: Mr. President-elect, can I ask a question? One of the issues that you actually were very careful not to speak about during the campaign, and haven’t spoken about yet, is one very near and dear to my heart, the whole issue of climate change, the Paris agreement, how you’ll approach it. You own some of the most beautiful links golf courses in the world … [laughter, cross talk]

TRUMP: [laughing] I read your article. Some will be even better because actually like Doral is a little bit off … so it’ll be perfect. [inaudible] He doesn’t say that. He just says that the ones that are near the water will be gone, but Doral will be in great shape. [laughter]

FRIEDMAN: But it’s really important to me, and I think to a lot of our readers, to know where you’re going to go with this. I don’t think anyone objects to, you know, doing all forms of energy. But are you going to take America out of the world’s lead of confronting climate change?

TRUMP: I’m looking at it very closely, Tom. I’ll tell you what. I have an open mind to it. We’re going to look very carefully. It’s one issue that’s interesting because there are few things where there’s more division than climate change. You don’t tend to hear this, but there are people on the other side of that issue who are, think, don’t even …

SULZBERGER: We do hear it.

FRIEDMAN: I was on [CNBC's] Squawk Box with Joe Kernen this morning, so I got an earful of it. [laughter]

TRUMP: Joe is one of them. But a lot of smart people disagree with you. I have a very open mind. And I’m going to study a lot of the things that happened on it and we’re going to look at it very carefully. But I have an open mind.

SULZBERGER: Well, since we’re living on an island, sir, I want to thank you for having an open mind. We saw what these storms are now doing, right? We’ve seen it personally. Straight up.

FRIEDMAN: But you have an open mind on this?

TRUMP: I do have an open mind. And we’ve had storms always, Arthur.

Marc Morano at Climate Depot argued Trump is accurately citing the latest climate science by noting that extreme weather is not getting worse.

-- The U.S. has had no Category 3 or larger hurricane make landfall since 2005 – the longest spell since the Civil War.

-- Strong F3 or larger tornadoes have been in decline since the 1970s.

-- Sea level rise rates have been steady for over a century, with recent deceleration.

-- Droughts and floods are neither historically unusual nor caused by mankind, and there is no evidence we are currently having any unusual weather.

Then Trump turned to the Climategate controversy:

TRUMP: I know we have, they say they have science on one side but then they also have those horrible emails that were sent between the scientists. Where was that, in Geneva or wherever five years ago? Terrible. Where they got caught, you know, so you see that and you say, what’s this all about. I absolutely have an open mind...

JAMES BENNET, editorial page editor: When you say an open mind, you mean you’re just not sure whether human activity causes climate change? Do you think human activity is or isn’t connected?

TRUMP: The North Sea, that could be, that’s a good one, right?

The Times took one more run at it:

TRUMP: See ya there. [laughter]

SHEAR: Just one quick clarification on the climate change, do you intend to, as you said, pull out of the Paris Climate …

TRUMP: I’m going to take a look at it.

The Times interviewers also obsessed over whether Stephen Bannon is too friendly with white racists in the "alt-right" -- an argument Trump utterly rejected -- to the point where Trump shot back "Boy, you are really into this stuff, huh?" When they asked what he thought about Breitbart, Trump surely bothered them by comparing it explicitly to a publication, a more conservative version of The New York Times.