Author and talk-show host Laura Ingraham is being considered for White House press secretary. On Fox News Sunday, Ingraham demonstrated she was more than ready to come to the emerging administration's defense. After Fox analyst Juan Williams claimed Trump was nominating a "team of radicals," singling out Sen. Jeff Sessions and Gen. Mike Flynn -- something no liberal journalist said about Obama's Cabinet picks like Eric "Nation of Cowards" Holder and HHS secretary Kathleen Sebelius -- Ingraham took out a rhetorical hammer:

INGRAHAM: Well, there was a lot said by Juan. But you said 'team of radicals.' This is the kind of stuff that has turned people against Washington, D.C. And these type -- this -- these types of lines against true patriots, who sacrificed for their country, who are beloved among the men and women in the military, who actually do the heavy lifting for all of us. Mattis, General Mattis, is one of the most beloved Marines of the last 50 years. General Flynn is considered one of the pre-eminent intelligence experts of our age. So to throw out these lines, a team of radicals, that serves nobody's interest. If you have a substantive disagreement with their approach to fighting terror or their approach to intelligence, that's fine. But these blithe comments, I think, have poisoned political discussion in this country, and I think it's exactly why people despise this city.

Williams argued “So you have people who I would say don't fit into exactly a team of rivals, but to many people a team of radicals. A team of radicals in terms of, what are these people representing? Flynn, Mike Flynn, I don't think he could be confirmed, but so he's getting the -- the national security advisor job.”

Why? He said Flynn spurred “questions about his management style and about sharing information and what some in the intelligence community call "Flynn facts," which is facts that don't comport with what others in the intelligence community believe to be true. Colin Powell writing in the WikiLeaks leak that he thought he was unhinged. I think this tells you this -- it would be very difficult.”

He also suggested Jeff Sessions shouldn’t be confirmed because he opposed Elena Kagan’s appointment to the Supreme Court. He added: “I wrote a biography of [Thurgood] Marshall. Sessions said, well, you're associated with these kind of activist judges who are more after their own political ends than justice. Well, if you apply that to Jeff Sessions and the fact that he was rejected for a federal judgeship 30 years ago. We didn't have very sensitive race relations 30 years ago as compared to today, and he was rejected then.”

Bob Woodward sounded more pragmatic: “ They are hard liners. But I think, as Laura was suggesting, in presenting -- in talking about these people, when you dig into who they are and they have controversial pasts, presenting them is one dimensional, is a giant mistake. These are complex people.”

Fox host Chris Wallace asked Ingraham if the President-Elect understands "the role the media plays" at the White House. Ingraham said unnamed "network chiefs" admitted they were "inside their own bubbles" in this campaign: 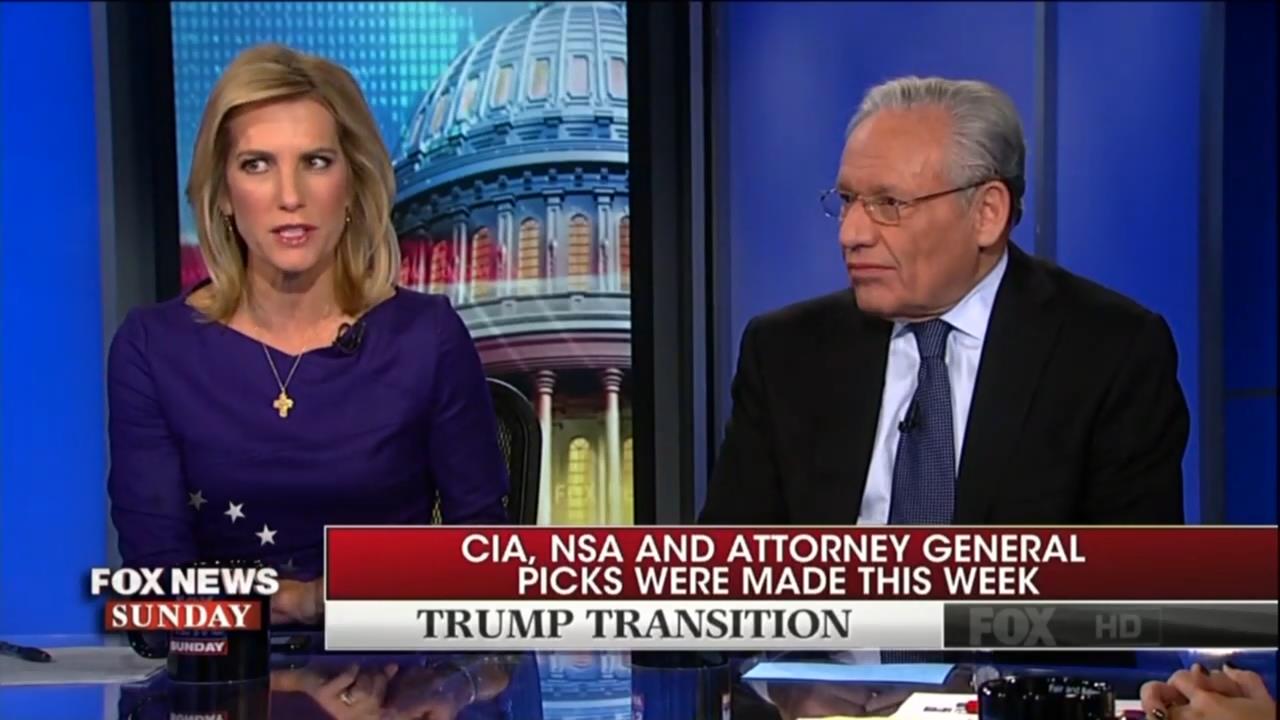 INGRAHAM I think what a lot of folks after this election cycle ended believe is that the press really was stacking the deck in their own way against Trump. Every public opinion survey reveals that. I've had conversations with network chiefs over the last week who themselves have admitted that they missed the boat on this and they were operating inside their own bubbles and not talking to enough Americans.

So I think, you know, without pointing fingers, I think there's a lot to be learned from this election. I think the press needs to learn more. I think some of us in the commentator class need to keep our eyes and ears open. Respect, I think, is really important. And I think there are reporters who do great work out there. And sometimes they're not from the traditional networks. Sometimes they're from new media. But I think it's -- it’s important that we have a vigorous press and a fair press. And I think that's all people really should expect.