For decades, liberal journalists have smelled racist or xenophobic airs whenever a conservative politician says "let's take our country back." James Taranto of The Wall Street Journal posted Miami Herald columnist Leonard Pitts flip-flopping with the phrase over just 11 days of the newspaper. He was "Two Columnists in One!" 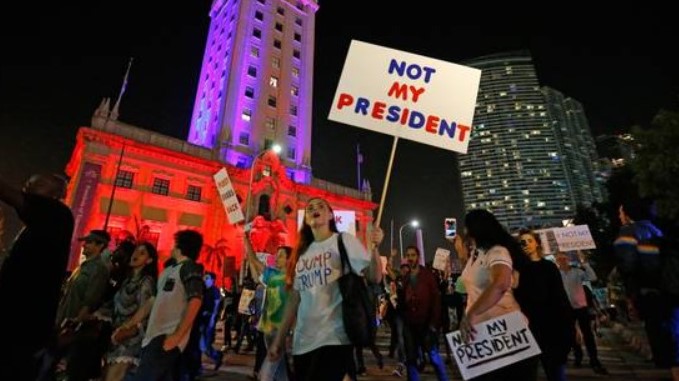 "The white guy who preceded the black guy spent a $128 billion surplus into an over $400 billion deficit, presided over a cratering stock market and anemic job creation.Yet for all the grief he was given, nobody ever called him a “subhuman mongrel.” Lawmakers from the other party did not declare their refusal to work with him on even the most routine matters of governance. People did not take to showing up at his events carrying rifles. Nobody shouted, ‘I want my country back!’ ”—Leonard Pitts, Miami Herald, November 4.

“It’s time the majority that believes in a progressive, inclusive and compassionate America did more than just tweet about it. Nothing wrong with tweeting, but forces of exclusion, hatred and rage have overtaken the highest office in the land, so it’s also time for some old school activism. Time to march. Time to assail lawmakers. Time to boycott. Time to stand and be counted. Enough is enough. Let’s take our country back.”—Pitts warning of "the coming reich", November 15.

Pitts won the Pulitzer Prize for Commentary in 2004 and in 2015 published the "Obama novel" Grant Park, dissed as didactic in a review by The New York Times: "Despite too many wince-worthy lines, the novel’s plot — jump-started by Toussaint’s unwilling inclusion in a white supremacist scheme to ruin Obama’s election night — is nicely wrought, and sometimes manages to surprise."

On the 4th, Pitts unloaded the natural black leftist conspiracy theory. Republicans didn't oppose Obama because he was liberal, only because he was black, like Hillary would have faced Republican Snuggle bears:

A black man was elected president, and white people lost their minds.

Not all of them, no. Not even most of them. But not a piddling few, either.

That, in a nutshell, is the story of America’s hateful and obstructionist politics over the last eight years

On the 15th, he complained:

I am similarly impatient with those who say we must give the new president a chance to lead and hope for his success.

Is that what Republicans did for Barack Obama when they gathered on the night of his inauguration and plotted a conspiracy of obstructionism to cripple his presidency? Is it what Donald Trump did when he spent years questioning the veracity of an ordinary birth certificate? (Italics his.)

Being mad at the birthers is natural for Obama fans. But Obama fans never admit Obama lied about his own birth and fatherhood narrative (among many other things) in his best-selling memoir Dreams of My Father. Obama never sat down with Oprah Winfrey like James Frey to apologize for the fictional elements he added.