The Left Demands: 'Saturday Night Live' Must 'Take Down Trump'

Absolutely everything in our media is expected to unite around electing Hillary Clinton. Before the fall season began, Politico ran an article headlined: “Will 'Saturday Night Live' take down Trump?” The subheadline was a quote from leftist Muslim comedian Dean Obeidallah:  “Maybe it’s going to take comedians to do the job that cable news has relinquished for so much of the campaign.”

The Left expected NBC to crush Trump. When Matt Lauer failed to do it, they ranted. When Jimmy Fallon mussed Trump’s hair, they railed. When Lester Holt completely threw the first debate for Hillary, it was clear NBC had received the message.  The first two weeks of Saturday Night Live also blatantly went to bat for Mrs. Clinton.

In a cover story in Parade magazine, SNL boss Lorne Michaels claimed “Fundamentally, we’re nonpartisan.” Cast member Cecily Strong tried to claim there was no pro-Democrat tilt on the show.  “When we put together a show, I don’t think the math is exactly that we’ll always do one Clinton joke and one Trump joke,” Strong claimed. “But if something is ridiculous, we get to point it out no matter who is behind it. We’re all about whoever is being the goofier person at that moment.” 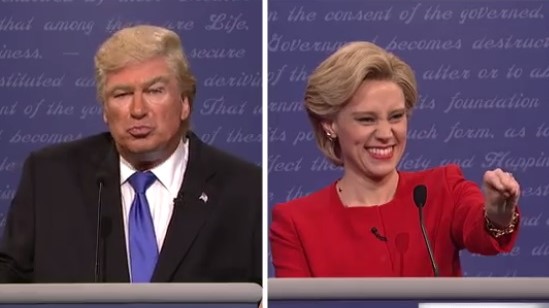 Wrong. Alec Baldwin’s Trump does nothing but mock every weakness Trump has. It was funny to hear people in D.C. say how “realistic” a skit was that featured Baldwin saying his Trump kissed Sean Hannity on the mouth.  Would it be “realistic” for Hillary to talk about kissing Andrea Mitchell on the mouth?

Has anyone noticed how similar Baldwin is to Trump? New York tabloid-press figure, married to a foreign-born woman young enough to be his daughter, calls women pigs – or in Baldwin’s case, called his own daughter a pig in a widely distributed audio tape? No one in the liberal media wants to know what Alec Baldwin said to Billy Bush for an Access Hollywood story on 30 Rock in the Bush years.

By contrast, Kate McKinnon’s Hillary Clinton has started out the season mostly gloating that she’s going to win. That’s not funny to half the audience, but a delight to the Left. McKinnon has also worked to make Trump campaign manager Kellyanne Conway look like a blonde bimbo who throws wild smears at Hillary.

The real clue as to how NBC is trying to fix the election even on its comedy-skit show was the first week’s “Family Feud” skit.  In a widely rebroadcast clip, they made fun of the Trump children as “Children of the Corn.” But there was no Chelsea Clinton character. It’s like SNL is still wincing for the liberal beating it took over mocking Chelsea’s looks – in a very mild way – after Clinton's election in 1992. SNL removed its Wayne Campbell “we’re rooting for you” line from all rebroadcasts. It's still censored on the Internet.

By contrast, Hamilton creator and star Lin-Manuel Miranda started his guest-host stint in the second episode by rapping that Trump was a "piece of" [excrement]. It was relentless Trump-bashing, but a liberal review at Wired found it to be a tame "course correction":

Last night’s episode, easily one of the most well-timed and on-point SNL episodes of the last few years,  opened with guest-star Alec Baldwin reprising his Trump impression in a mock CNN segment wherein the Donald defended his “grab them by the pussy” comments by telling the anchor (and women voters who might be watching) that “I promise I can do a whole lot more than just grab it. I can also bop it, twist it, and pull it.” Cut to Kate McKinnon as Hillary Clinton, popping champagne. It wasn’t the abject waste-laying satire people hoped they’d cook up, but it was something.

Michael Che threw back to Trump’s comment that he needed a Tic Tac in case he felt compelled to “start kissing” a woman he and Access Hollywood host Billy Bush were about to meet. “I don’t think the problem women have with sexual assault is bad breath,” Che said. “And by the way, you might want to take it easy on those Tic Tacs, ’cause they might be turning your skin orange.”

That bit was quickly followed by guest appearances from [Tina] Fey and Trump tousler Jimmy Fallon as undecided Philly voters. While also acknowledging Trump’s lewd comments about women, the pair—in character—also referenced (and seemingly, if weakly, apologized for) Fallon’s buddying up to the the Republican nominee with the late-nite host claiming “I don’t like Trump!” Like SNL itself, Fallon has some explaining to do for giving a Trump a pass over the last few months, and while one segment won’t do that, it’s still course correction—and one that comes as ever more elected Republican officials are doing the same.

Relentless mockery of Trump pours out, and the Left says "eh, NBC still needs to do more." Which it surely will in the closing weeks.