People: Is Trump Hitler? And Hillary, 'What Emoji Best Describes You?'

People magazine’s interview with Hillary Clinton and Tim Kaine in the October 3 issue carried the usual hard-hitting questions from Sandra Sobieraj Westfall: “Here’s one you probably won’t get in the debates: What emoji best describes you?”

Clinton replied “All the happy emojis, the heart eyes, the hug ones. I use them with family.” Back in April, People asked Trump about comparisons to Hitler, and found an expert to suggest Trump could end America. 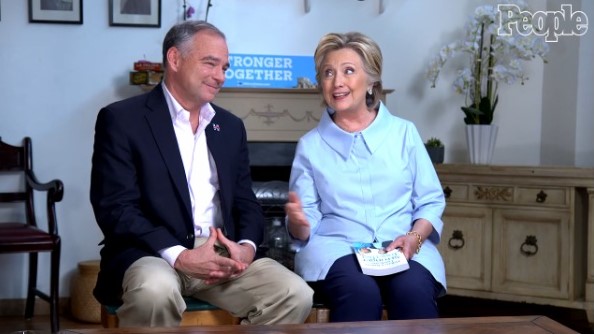 The story was headlined with a quote from Kaine: “She’s the Boss.” People sought to play down her pneumonia (with no reference to the “overheated” lying about it) by describing her alpha-female dominance.

“She made fun of me,” reports Kaine, 58. Explains Clinton: “I did joke that having downtime would give me the edge on all the briefing materials we have to read.”

....On her recent sick days at home, Clinton, 68, tells People, she did “bounce off the walls a little bit—I’m not great at taking it easy.”

In between, an anonymous “confidant” adds “You look at her and there’s pure joy – and relief – to be sharing this race with someone who has her back.” This quote could have been used for whoever Hillary chose.

People: What surprising things have you learned?

Clinton: He’s one heck of a harmonica player.

Kaine: That just shows she doesn’t have very good musical taste. What I’ve learned about Hillary is this person who won’t back down.

Especially on letting you have her e-mails. On the video they posted, Hillary agreed "I have no taste in music!" But People offered no ellipses.

Then came the denouncing-Trump part:

People: Do the attacks by Donald Trump affect you more than they affect her?

Kaine:  If you're dissing somebody with a disability, saying the American military is a disaster, trashing somebody because they're Mexican-American, for gosh sake.  That's what makes her mad. Now, some of the things that Trump says about her ... like, 'Does she look presidential? I don't think so, fellas' – it makes me furious.  But he'll probably be saying that at the end of her second term, when he's hawking Trump bottled water.

Clinton:  The divisiveness, bullying, and bigotry we’ve seen from Trump is so dangerous and so contrary to what has made us such a great nation. We have work to do.

This is nothing like the way Westfall  in April compared Donald Trump to Hitler and cued up experts to screech President Trump could literally mean the end of America:

When PEOPLE asks about the comparisons that have been made between him and Adolf Hitler, Trump peels off a quick "Well, that's ridiculous," then says it's all because "the last person Hillary [Clinton] wants running against her is me."

… That language – about Muslims, trade, torture, and maybe pulling back from NATO – has already come at a price overseas. “ISIS loves invective that justifies what they’re doing,” says terrorism expert Malcolm Nance, a career Naval counterintelligence officer. “This is the first time we are hearing out of the mouth of a presidential candidate something that could literally lead to the economic, military, and ally collapse of the United States.”