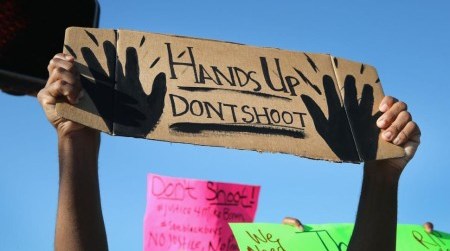 On NPR’s Weekend Edition Saturday, the taxpayer-subsidized network promoted the latest drama from leftists in Ferguson, Missouri: a theatrical presentation of an ancient Greek play, meant to demonstrate, according to NPR, “its theme of an individual’s struggle against a state.”

Absolutely nowhere in this story is any admission that Michael Brown was killed after reaching for a policeman’s gun and punching him in the face. Three autopsies, who needs them? Witnesses who claimed Brown had his hands up, saying don't shoot? Who needs to remember those lies?

SIMON: Their performance will take place in a church that is just blocks from the police station that became the focus of protests after the police killing of Michael Brown. It is hoped that Antigone's themes will mean something in the town where Black Lives Matter became a national movement.

Then came local St. Louis reporter Willis Arnold Ryder, trying to find similarities between the daughter/sister of Oedipus and the current day:

RYDER: It’s a play about a teenager whose family feud became a civil war. Her brother lost and died. Her uncle won and won't let Antigone bury her brother. The body is left waiting on the ground. Wellspring Church is down the street from the Ferguson Police Department and has provided sanctuary for protesters over the past two years. Its pastor, Willis Johnson, says the play reflects the struggle facing his community.

WILLIS JOHNSON: Disregard for humanity, disrespect for body and this whole clash or tension between individual rights and larger empire or system.

America is a “larger empire” of injustice? Does NPR understand it’s a cog in an “empire”? Ryder was too biased to ask Johnson whether Brown was showing disrespect for the police officer’s humanity. Let’s recall what even Obama’s Department of Justice concluded [page 80]:

The evidence establishes that the shots fired by Wilson while he was seated in his SUV were in self-defense and thus were not objectively unreasonable under the Fourth Amendment. According to Wilson, when he backed up his SUV and attempted to get out to speak with Brown, Brown blocked him from opening the door.  Brown then reached through the window and began to punch Wilson in the face, after which he reached for and gained control of Wilson’s firearm by putting his hand over Wilson’s hand.  As Brown was struggling for the gun and pointing it into Wilson’s hip, Wilson gained control of the firearm and fired it just over his lap at Brown’s hand.  The physical evidence corroborates Wilson’s account in that the bullet was recovered from the door panel just over Wilson’s lap, the base of Brown’s hand displayed injuries consistent with it being within inches of the muzzle of the gun, and Wilson had injuries to his jaw consistent with being struck.

NPR doesn’t really care about the facts. It just wants people to feel happier. Ryder concluded this whole story was “complex,” somehow beyond the facts:

ARNOLD: And that's what everyone told me. The issues in Ferguson are too big, too complex, to be fixed by a play, but the group says it wants to offer something.

"Validating" people, no matter how much they ignore reality? Let's hope NPR isn't one of those networks where they fulminate about living in an era of "post-truth politics." They're part of the problem.