On PBS, Mark Shields Trashes 'I'm With Her' As The 'Single Worst Campaign Slogan I Have Ever Heard'

Mark Shields, the Democratic pundit on the PBS NewsHour, shocked the anchors a bit on Thursday night in a roundtable to discuss what Hillary Clinton needed to do with her acceptance speech. His answer was she needed to focus on people who feel let down by the economy....but not before he said she  had the worst campaign slogan he'd ever heard! 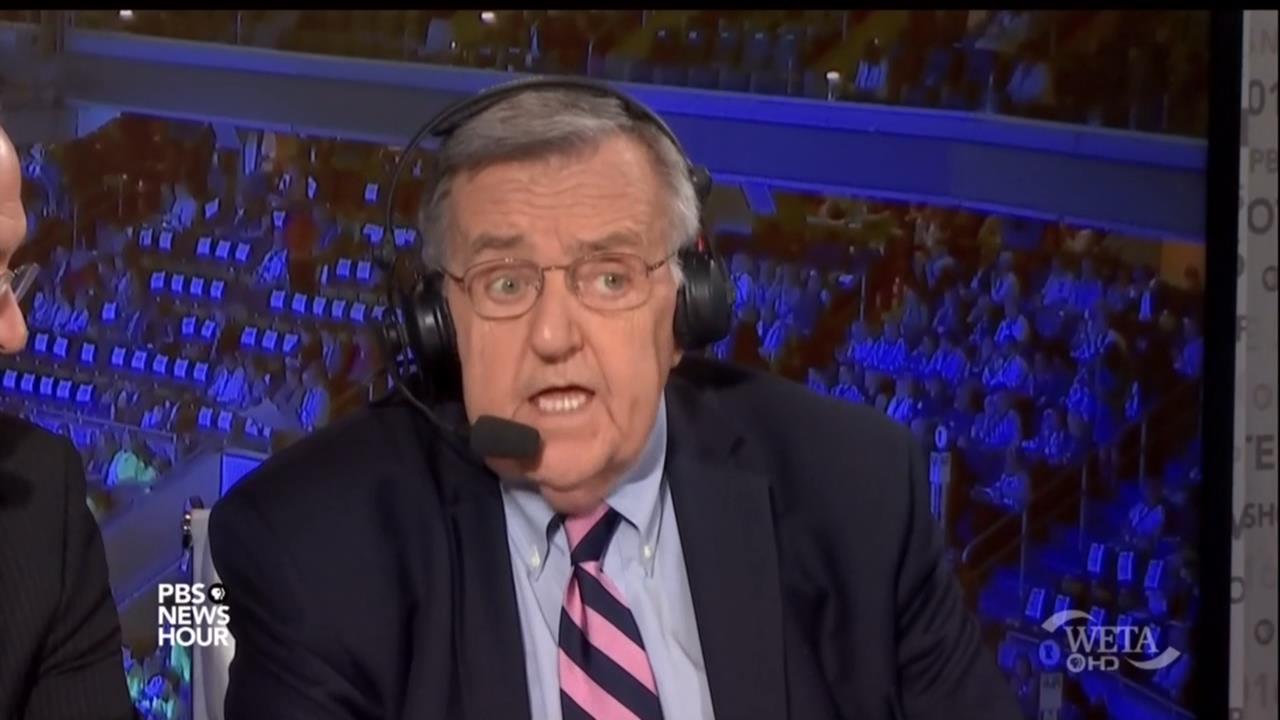 MARK SHIELDS: I think she - first of all, it's a great victory, acknowledge it. She has made history. The single worst campaign slogan I have ever heard, "I'm with her," I mean, it means nothing. It absolutely means nothing to anybody.

GWEN IFILL (after a nervous laugh): Maybe if you say like, "I'm with her."

I mean, it's about appealing -- and it says nothing about anybody's life, about the country. I was just thinking tonight of great speeches given by presidents on such occasions, and “The measure of our progress is not whether we add more to the abundance of those who have much, whether we provide enough for those who have too little,” Franklin Roosevelt.

Someone could have told Shields it's a slogan like "I Like Ike." It's a button, not a platform. But the campaign that says "don't vote for her because she's a woman" is at the same time constantly underlining her "historic" candidacy. That slogan is all about just channeling the excitement about her gender.

As he often does, David Brooks agreed with Shields, although this one wasn't a pro-Hillary point.

JUDY WOODRUFF: David Brooks, you and Mark have, I think, basically agreed for most of this campaign that you haven’t heard from Hillary Clinton the rationale for her candidacy. fter all these months, do you agree with Mark it’s still not there?

DAVID BROOKS: Yes, I agree with the “I’m with her.” It’s about I, though. The great god of Narcissus, which we all worship --

JUDY WOODRUFF: I actually thought it was “Stronger Together.”

AMY WALTER: Well, now it is.

DAVID BROOKS: I would like to see an animating passion. Tim Kaine actually had a good line. What animated you before you got into politics? And she actually does have a story there to tell about children. And so drawing that animating passion will do good

Brooks wasn't a fan when the speech was over later that night. He called it "below average"....after the anchor Gwen Ifill proclaimed "She rocked the house!"