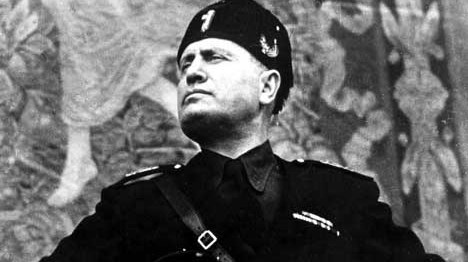 Political reporter Philip Bump of The Washington Post just had to dip into the yellowed pages of media history so he could post this headline on Saturday: “In 1927, Fox News Service filmed Benito Mussolini telling immigrants to ‘make America great’: Every word of that is true.”

Bump began the history lesson: "You can trace the name Fox in the news industry back through various corporate iterations until you get to the Fox News Service, part of Fox Film, which merged with Twentieth Century Pictures in 1935 to form 20th Century Fox. Fox News Service was in the newsreel business, as Fox News today is in the cable news business."

Fox saw the business potential in putting out movie news with sound. The company created a new tagline: "Fox Movietone News: It speaks for itself." Bump added:

Fox News wasn't the only group to recognize the value of the combination of sight and sound. Benito Mussolini, the fascist prime minister of Italy, at one point reportedly said that were he to broadcast his speeches "in twenty cities in Italy once a week," he would "need no other power." When he was approached about filming a statement for the newsreel, he agreed.

Fox promoted the upcoming statement in advertisements in the New York Times in September 1927, with the debut of the speech coming to New York City's Times Square theater later that month.

At least Bump reported that his own newspaper sounded quite nativist back in the day.

As the number of Italians coming to the United States increased, so did tensions with those already here. In 1920, The Washington Post editorialized for new constraints on immigration from Southern Europe, saying that "the alien scum from the cesspools and sewers of the Old World has polluted the clear spring of American democracy."

In part, the Italian strongman announced:

I greet with wonderful energy the American people and I see and recognize among you the salt of your land, as well as ours, my fellow citizens who are working to make America great.

I salute the great American people. I salute the Italians of America who unite in a single love of two nations.