Disgraced Dan Rather: Trump 'So Far to the Right,' But Dems Could Have a PR Problem with Lefty Platform

MSNBC just keeps turning to disgraced CBS anchor (and phony document presenter) Dan Rather as a grand expert on modern American political history. On Monday night’s All In, host Chris Hayes bowed to Rather’s very long career (in liberal bias). But at least Rather suggested that Hillary Clinton’s platform concessions to the Bernie Sanders followers could become an ideological problem. Most liberal reporters step around or deny that impression.

CHRIS HAYES: Mr. Rather, you’ve covered more than a few conventions in your time. What do you think about -- what are you thinking as we go into these conventions? There was a period everyone said conventions have become essentially four-day infomercials, there’s no intrigue, there’s no, you know, chaos, nothing unexpected. Do you think that chain will be broken this year? 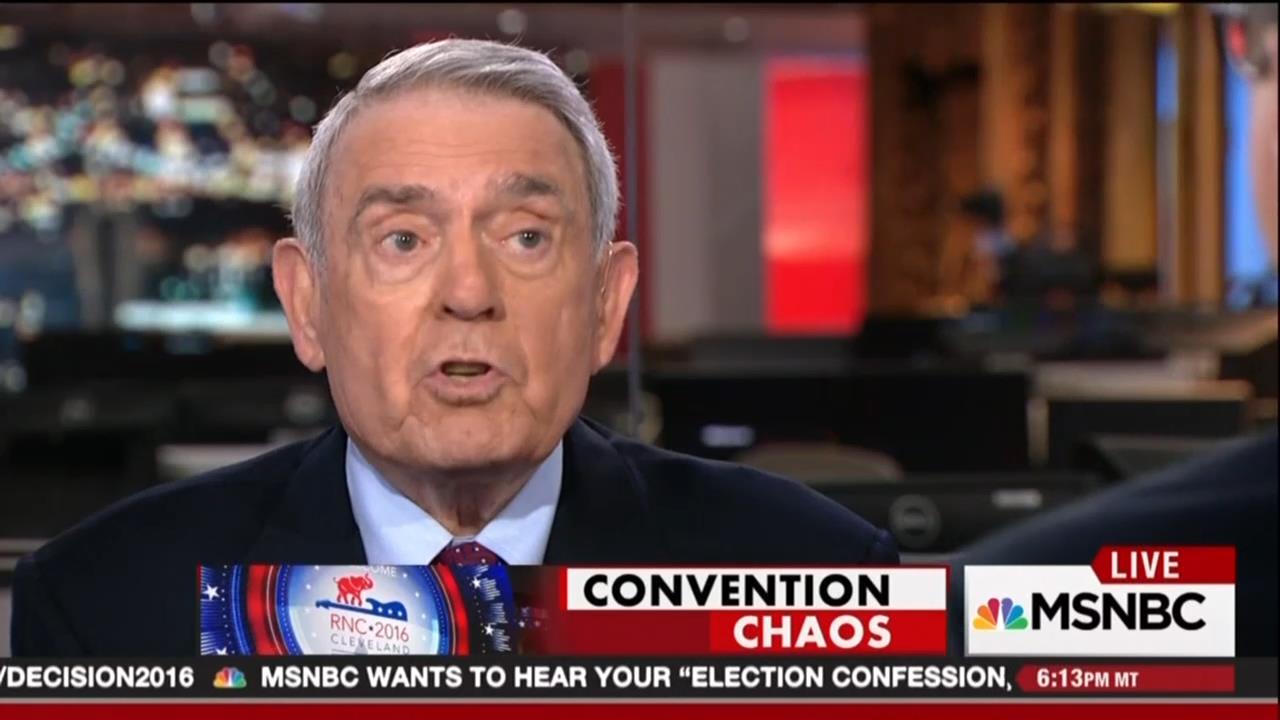 I will say that with the Republican convention in Cleveland, there’s more unpredictability with it, because as you pointed out, Donald Trump has the wall and the opposition to Muslim immigration as the two, I would say, main anchors of what he stands for. Beyond that, it gets very confusing.

However, I think he got a break today, to tell you the truth, the last few days, because with the Democratic platform, Hillary Clinton has at least in the abstract been pulled to the left. Now fortunately, for her, Trump is so far to the right that this pull to the left may not affect her as it might under other circumstances. But that’s something to look out for, because the perception will be, is that she moves significantly to the left in order to accommodate Bernie Sanders and his followers, and that gives Trump an opening.

HAYES: You know, you say that I think, in the context of normal politics, right? What I was just  saying there was, okay –  here are the items, right, these positions are far to the left, right? You can imagine a Republican making that case.

It was less surprising that Rather compared Trump’s appeal to George Wallace in 1968. “1968 is the year closest to what we’re experiencing here in 2016," he said. "The country really felt wrecked at times. Anti-war demonstrations, and the assassinations of not only President John Kennedy but Robert Kennedy, Martin Luther King. There were race riots in the streets.”

This would lead to the notion that the conventions could be a nightmare for police (and protesters) like Chicago in 1968. But is it possible that's more likely with the Republicans (loaded with gun-rights supporters) or the Democrats (the gun-free zone party)?

Rather then stepped into his comfort zone of weird Ratherisms: "Getting back to the platform for a moment, it occurs to me, having said, that I think the Democratic platform now as it is formed, jerks Hillary Clinton some what to the left. I operate under the creed of beware of pastries, easy credit and politicians' promises, particularly on platforms."