It’s mid-May, which means it’s time for The Washington Post to unload the cheap-shot “investigative” stories on the Republican front-runner. On the front of the May 11 Washington Post is a story on Trump’s sex boasts….and sex life. The online headline is “From playboy to president? Trump’s past crude sex talk collides with his White House bid.“ In the newspaper, it was "Before candidate Trump, there was playboy Trump: Extolling Lothario lifestyle worked for the developer, but now it behooves him to back off old boasts." 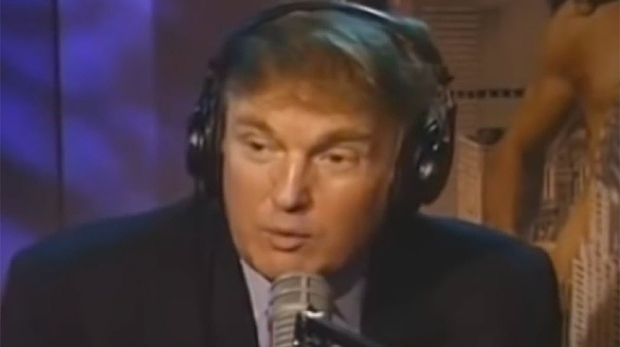 Over 15 years, radio shock jock Howard Stern and his buddy Donald Trump periodically carried on like towel-snapping “bros” in a locker room, rating women’s tops and bottoms, debating whether oral sex is “important,” and egging each other on about whether they would like to go to bed with famous women from Cindy Crawford to Diane Sawyer.

“You could’ve gotten her, right?” Stern asked Trump on-air shortly after Princess Diana’s death in 1997. “You could’ve nailed her.”

“I think I could have,” Trump said.

How about singer Mariah Carey? “Would you bang her?” Stern asked. Trump replied, “I would do it without hesitation.”

Trump’s crude talk on-air with Stern between 1990 and 2005 was part of an image the businessman cultivated as a Manhattan playboy who had so many women that he barely had time to sleep. He was often seen at trendy nightclubs with different women, appeared on the cover of Playboy magazine, wrote in his books about all the women chasing him and publicly boasted about his sex life.

Notice the Post didn’t locate these 19-year-old quotes when there were still Republican opponents in the race appealing for the conservative-Christian vote. The Post somehow couldn’t find the time for this story until the term “presumptive nominee” fit.

Jordan noted Trump’s exchanges with Stern were posted online by BuzzFeed “this year” – that would be in February. The Post thought they became front-page material on May 11. Check the liberal rag's Romney-haircut-bully-from-1965 timing.

Inside the paper was the headline “Trump now recalls being too busy for reported escapades.” Somehow, it’s doubtful Bill Clinton and “reported escapades” would go in the same headline in the Post. Jordan reveled in Trump's "man about town" PR spin from back in the day:

Trump said the media coverage of his personal life was “overblown.”

But it is clear that Trump played a role in shaping public perceptions.

He wrote in his best-selling books that a parade of famous women wanted to date him. In his 1997 The Art of the Comeback, he wrote, “If I told the real stories of my experiences with women, often seemingly very happily married and important women, this book would be a guaranteed best-seller (which it will be anyway!).” He also wrote in that book about being “linked to dozens of other women. . . . It was incredible, being intimately associated with women I had never heard of. Women themselves — some very famous — were linking themselves to me. I guess they wanted some of the publicity. They were calling. Their agents were calling. It was a circus! It was sick!”

After his public split with his first wife, Ivana, in 1990, Trump often got more media attention for his dates than his deals. From then until 2005, when he married his third and current wife, Melania Knauss, Trump’s social life was a tabloid staple. During that time, he had a second tumultuous marriage, to beauty contestant Marla Maples, who was quoted on the cover of the New York Post as saying about Trump: “Best Sex I Ever Had.”

In between his marriages, a string of celebrities, including Madonna and Kim Basinger, were reported to have been chasing Trump — these women denied that, though. The rumors, even if not true, along with a string of women whom Trump showed up with at high-profile events, left the impression that he was a man about town.

Jordan and the Post allowed Trump to make the expected demurral: I was too busy to be a playboy, I wasn't planning on running for president when I talked to Howard Stern, and so on. These spin lines will work easily with Trump voters. But the Post is surely calculating that women voters are a crucial demographic of this campaign, so this kind of story is....helpful for the Clintons.

PS: Mary Jordan also penned this story a month ago: "Trump says he never dated a woman who had an abortion."