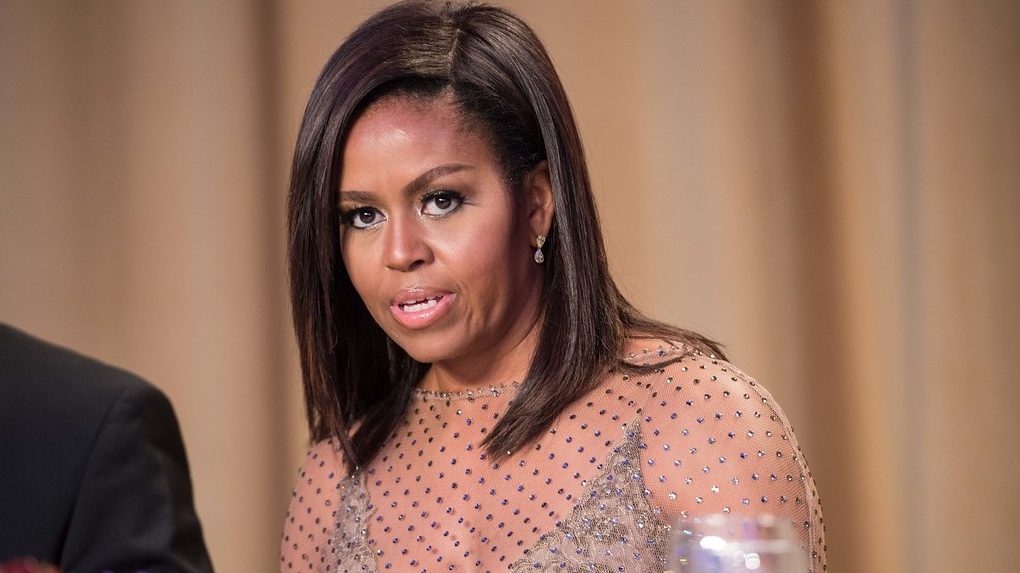 “It’s not the ‘Nerd Prom’ anymore,” Friedman began, touting “the Michelle Obama effect.”  She gushed over how “No one blinked” as Mrs. Obama donned a cape “sprinkled with Swarovski crystals by Givenchy haute couture...It’s very, very 1 percent.”

There was no attempt at a price tag for this Givenchy-with-crystals outfit...but then, Michelle would wear a $4,500 gown to dinner with a communist dictator. So shame is not on the menu.

For the umpteenth time, we’re told “Mrs. Obama has been a canny user of fashion since her family entered the White House, leveraging her position and her profile to promote local industry and emerging designers, engage in some subtle cross-border diplomacy, and even challenge some classic assumptions about American first ladies having to wear only American designers.”

This last “assumption” is just plain odd. Was Oscar de la Renta born in Connecticut? And wasn’t Arnold Scaasi a native of Canada? The Times ought to roll out the fact-checkers before they mangle the history of First Lady fashions. But Friedman is on a sickly-sweet roll:

She has been gradually raising the glamour stakes at the Correspondents’ Dinner over the years — going from a simple hot pink Michael Kors sheath in 2009 and a red Prabal Gurung with a draped neck in 2010 to strapless Naeem Khan in 2012; embroidered, off-the-shoulder Marchesa in 2014; and platinum-beaded Zac Posen in 2015.

This year, however, she wore a beige silk spaghetti-strap dress with lace and crystal embroidery and a tulle cape on top sprinkled with Swarovski crystals by Givenchy haute couture. That’s about as elite, and elaborate, as fashion gets. It’s very, very French. It’s very, very 1 percent. It took the old rules and tossed them out the window and dared everyone to get upset.

And no one blinked.

Indeed, the Internet mostly applauded the choice, using words like “full glam” (Fashionista), “stuns” (The Huffington Post) and “glistens” (E! online) to describe the effect. Personally, I found the cape oddly matronly, but the choice, and the reaction, especially its lack of skepticism about either the origin of the dress or its cost, was notable. After eight years, Mrs. Obama has changed expectations completely about what a first lady should wear.

It's true: The Huffington Post doesn't give a hoot about the 99 percent when there's Obama-praising to be done:

While we were obviously ogling all the celebrities’ looks, it was Michelle Obama who really stole the show.

The first lady arrived in a gold, embellished Givenchy gown that was the perfect blend of sexy and elegant for her final WHCD as the first lady. [Italics in the original.]

She kept her hair and accessories simple and let the stunning gown, which came complete with a sheer overlay, speak for itself.

That Fashionista blog is also in the tank for Michelle (not for the first time): "she's taking taking heaps of fashion-adjacent risks in her husband's final year as the leader of the free world. For fans of the Obama presidency, this occasion may be bittersweet, but man do we look forward to watching her depart her post in style."

InStyle magazine was also agog: "Michelle Obama nearly glowed from her lofted stage perch.  The dress, a sleeveless adaptation from Look 20 of the Marchesa Fall 2013 runway show that flaunted FLOTUS's famously toned arms, also featured a fitted waistline and a sprinkling of romantic silver floral embroidery on the bodice."

US magazine added to the sugar rush: "The '70s called — and they're loving your look, FLOTUS! Michelle Obama donned a shimmer, sheer ensemble for her last White House Correspondents' Dinner in Washington, D.C., on Saturday, April 30." She was "Modeling a look worthy of her friend Beyoncé (albeit, considerably less sheer)".

This will end. Mrs. Trump and Mr. Clinton can't draw quite the same adoring attention from the fashion writers.