Adding Insult to Injury: After Monkey-fying His Kids, WashPost Claims It's a 'Gift to Ted Cruz'

The Washington Post is already trying to make lemonade out of its bitter-lemon cartoon attack on Ted Cruz and his little daughters Catherine and Caroline, dehumanizing and denigrating the Cruz girls as monkeys. Media writer Callum Borchers wrote a piece for "The Fix" blog titled “Why that now-retracted Washington Post cartoon is a gift to Ted Cruz.” Spare us.

Dear Cal: Every conservative Republican who wants to win should be “media-bashing” as an adjective. And Hillary’s team never does “media-bashing”? Borchers ran the original “political props” argument from Telnaes, and the "we don't target kids" rebuttal from Washington Post opinion editor Fred Hiatt when the monkey-girls cartoon was removed. He summed up: 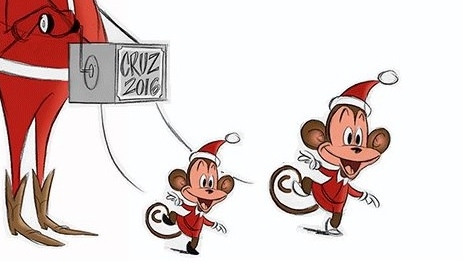 Whether you agree with Telnaes’s original reasoning or Hiatt’s overriding rationale, one thing should be obvious to any political observer: This is a win for a candidate who is rising in the polls thanks to support from more conservative Republicans and who has been highly critical of the press -- most memorably during the third Republican presidential debate, when he blasted the moderators’ questions as being illustrative of “why the American people don’t trust the media.”

The cartoon episode does two things for Cruz: It gives him a piece of evidence to pull out whenever he wants to argue that the loathsome “mainstream media” doesn’t treat him -- or conservatives in general -- fairly. And it makes his and his supporters' anti-establishment pushback seem effective, by virtue of the retraction.

Remember, this is a candidate who was recently called a “maniac” by GOP front-runner Donald Trump because he has a penchant for tactics — he read Green Eggs and Ham to his daughters during a filibuster in 2013 — that ultimately change little and irritate many colleagues.

Setting the Trump-ish language aside, that is one of the knocks against Cruz — that he’s full of principle but short on results. Having The Post yank the cartoon allows him to look like he gets results from those predisposed against his -- and his supporters' -- worldview.

Last December 1, The Fix had a different reaction when the liberal media exploded in outrage and caused the firing of Republican staffer Elizabeth Lauten when she suggested (on her own Facebook page, not a national newspaper website) that the Obama girls showed no class at the Thanksgiving turkey pardon. It's wasn't a "gift" for Obama. It was a lecture at the offender. Jaime Fuller concluded:

The lesson: Don't say anything bad about the president's kids. Also, the Internet is always waiting for the next thing to be outraged about; don't make its job too easy.

Avoiding saying stuff about presidential kids has not been America's strong suit — especially since presidents usually try to keep their children away from spotlight. It's human nature to be curious about the stuff you're told to avert your eyes from....

So, we know that you are going to talk about presidential kids. It's the American way. However, you may want to stick to being amused by selfies, Instagrams and "teen contempt." Be amused, but do not analyze the millennials.

And this latter bit of advice applies to all things -- not just the White House.

This was our take on the Lauten matter and the media hypocrisy on presidential children.