During the Christmas season, one might think the newspapers would refrain from trashing Christianity. In reality, the opposite happens. On Sunday, Washington Post book editor Ron Charles celebrated the liberal fun zone “between blasphemy and hilarity.” The oxymoronic headline was “DIY for the (irreverently) devout.”

Christian-trashers always count on Christians to accept the joke – but how would the Post treat “What Would Mohammed Craft?” Charles gushed:

For Christians with a sense of humor, "What Would Jesus Craft?" is a gift from the heavens. Ross MacDonald's "30 simple projects for making a blessed home" walks that straight and narrow path between blasphemy and hilarity....Jesus may have turned water into wine, but MacDonald can turn a flowerpot into a Guardian Angel toilet paper cozy.

We’re told “by the time you reach the 'Fedora of Thorns,' you can smell the brimstone. MacDonald has an inspired eye for capturing America's weird blend of holiness and kitsch.” 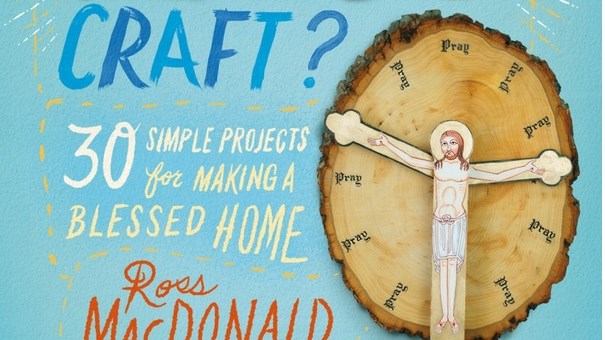 By Chapter 2, "For Your Blessed Home," the projects have clearly ascended into the realm of hilarity. MacDonald claims that his "Infant-of-Prague Lucky Lottery Ticket Caddy" is a "surefire, time-tested, scientifically proven, miraculous money and luck magnet, whether you are a Catholic or a normal Christian."

Even in my most pious school days, I'm not sure I could have carried off the "Last Supper Lunch Box." [Elsewhere online, Charles joked, "Finally, a lunch box that will keep your turkey sandwich fresh for all eternity."]

But toward the end comes the most glorious project: "Jesus's Pet Dinosaur Nacho Platter." It serves as both a lovely snack plate for Super Bowl Sunday and a full-scale refutation of Darwinism. The picture of the Son of Man astride a brontosaurus is a revelation.

There’s also an "Eye-See-You-in-Hell Mirror," and a "Time to Obey the Lord Clock."

More seriously, on Wednesday, Charles celebrated a slim novel “reimagining” the Bible titled This Is Why I Came. The author casts Abraham as a madman, Jonah wanting "a better God," and Joseph haunted by all the male babies who were slaughtered by Herod instead of his foster child Jesus. Charles began:

Long after being vomited up by that great fish, the Jonah character in Mary Rakow’s retelling of the Bible thinks, “I wanted a better God.”

During this season of sanctified shopping and faith-based terrorism, that still sounds like a reasonable request.

What a nasty turn of phrase: the Christmas season for the Post is "sanctified shopping and faith-based terrorism." Talk about a verbal vomit on your Christmas tree. First, there's the rewriting of the Old Testament:

After Abraham’s aborted sacrifice, a single page imagines the dreams that haunt Isaac throughout his life. Another page describes Sarah’s horror at being married to such a man. But brief as these prose poems are, they’re still capable of arresting moments and startling insights, as when Isaac, remembering his father’s mania, realizes that “the hunger for innocence in an adult can be the most dangerous hunger.”

God remains a central character in these stories, as angry and awesome as Jehovah, but Rakow pulls back the veil to show Him in all his dismay, confusion and even moral fatigue. In her version of the flood, God is astonished at his creation. “The more he paced and searched,” she writes, “the more he could not find himself, not in man and not in the mountain or glacier, the forest or the rivers, so that in time he recoiled at the thought of looking, and came to hate what once was magnificent, and to hate himself for making it and espousing himself to it.” You can hear the Genesis story in these elemental details, but Rakow casts a depressive shadow over her God, which grows darker still when Noah sees God scurry back to his gold throne and crouch behind it, ashamed and horrified by his carnage. It falls to Noah and others who follow to urge this Lord of the Universe to forgive Himself and learn mercy from humanity.

How convenient for those who wish to recast the Bible as a tale of zealous madmen listening to a horrified God. Forget celebrating Christmas:

Rakow’s version of the Gospels is equally freighted with despair that complicates — among other things — the celebration of Christmas. In this retelling, the Massacre of the Innocents is not just a foreordained step on the way to glory but an indelible horror that contaminates Jesus and his family forever. Tolerant neighbors might forgive a young woman for getting pregnant before she married; they might even overlook the grandiose rumors about her baby; but Rakow asks us to imagine living in a town where every family lost a son because of your child. How hollow the Good News would sound in the vast chamber of such grief. As Rakow describes the erratic trail of Jesus’s life, she never lets him forget that he was born in a pool of other children’s blood. “The villagers call him the crippled boy,” she writes, “who carries his past on his shoulders like a house.”

But the novel is tremendously poignant as it follows the life of Joseph, who speaks no words in the Gospels but finds his voice here. Far from the doubtless saint of Christian tradition, Rakow allows him a full range of human emotions. “Joseph looked at his son and wife and hid his thoughts because, again, he was calculating,” she writes. “The logic came to him often. If he hadn’t been a dreamer, if he hadn’t obeyed the voice in his dreams, if he hadn’t married Mary, she would have been dead seven years now, a thought he despised, as well as their son. But all the other boys would still be alive. Hundreds of them.” The Church might be willing to solve that equation for the benefit of humanity’s salvation, but no honest, merciful person can be untroubled by that horrific calculation. For Joseph, as Rakow imagines him, the price is simply too high, and she pursues him far beyond the thin details of the Gospels into his later life, a life that leaves him feeling separated from his family and haunted by God.

For media watchers, this "slim book reimagining/attacking Christianity" formula is the latest version of Colm Toibin's novella The Last Testament of Mary in 2012. Does this summary sound familiar?

Christ’s disciples are “fools, twitchers, malcontents, stammerers,” while her son’s preaching sounded to her “false, and his tone all stilted, and I could not bear to hear him, it was like something grinding and it set my teeth on edge.” There is no God in her Father or her Son. She proclaims of the death of Jesus only that “when you say that he redeemed the world, I will say that it was not worth it. It was not worth it.”

Matthew Balan wrote on this, too. But in the Post, Ron Charles couldn't make up his mind about whether Christians would become violent over these revisionist takes.