At the end of October, The Washington Post announced Callum Borchers of The Boston Globe would be joining their political team at “The Fix” to cover the intersection of media and politics and would, among other things, “occasionally call balls, strikes and fouls regarding campaign coverage.” 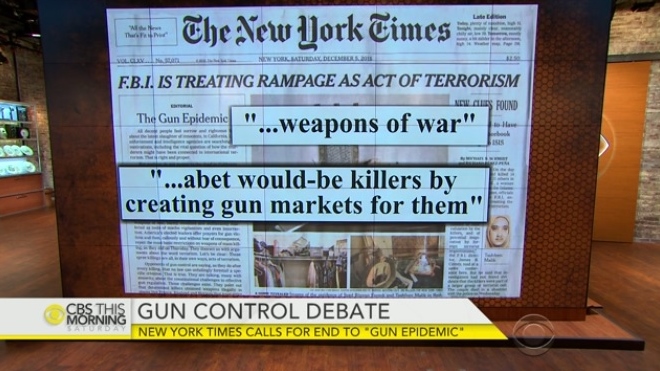 In the midst of an analysis headlined “The folly of the New York Times pleading for gun control on Page 1,” Borchers sloppily overreached, claiming that Republicans make media bias claims that are mostly “unfounded or greatly exaggerated.” They often “deliberately ignore” the divide between news and opinion sections.

Borchers thought the Times editorial could have “the opposite of the intended effect by overreaching on something most Americans simply don't think will do much to prevent mass shootings.” To balance that out, he cheaply tagged Republicans as insincere exploiters of media bias accusations:

Republicans have relentlessly accused the "mainstream media" (of which the Times is a flagship member) of advancing a liberal agenda. What they often fail to recognize -- or deliberately ignore -- is the separation of news and opinion. They'll read a column, blog or editorial that is critical of their policies and then angrily tell supporters that they can't get a fair shake in straight news reports. Most of the time, their complaints are unfounded or greatly exaggerated.

In this case, however, the Times has (at least temporarily) knocked down a wall by placing an editorial in a spot normally reserved for news. That does not mean the paper's political reporters will suddenly abandon all sense of fairness as they cover candidates who staunchly back gun rights. But it does give those candidates new cause for suspicion -- a cause they will almost certainly exploit on the campaign trail.

Borchers failed to acknowledge that Republicans think many news reports in the Times (and the Post) are loaded with opinion and “news analysis” that blurs whatever divide they think they are maintaining. Clay Waters made the case that on the same front page of the Times, reporters fulminated against the “rising tide of bellicosity” of the Republicans on Islamic terrorism.

One might even dare to say that taking on "calling balls and strikes" on media coverage is....an opinion just like the Republican opinion on media bias.

Earlier: Chris Cillizza of "The Fix" is a denier of pro-Hillary bias