Martin went looking for the legend to trash another legend, Michael Jordan, for the now-ancient offense of failing to publicly support the black Democrat challenging conservative Sen. Jesse Helms in 1990, who Martin announced had “very retrograde” attitudes on race: 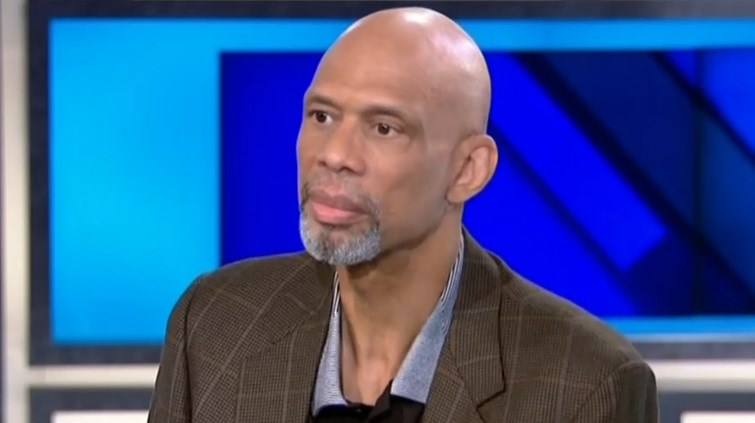 MARTIN: Michael Jordan was asked to endorse, you know, Harvey Gantt get in the very competitive, you know, Senate race, where there was - he was running against somebody who had very retrograde racial attitudes. And he's famously quoted as having said, you know, Republicans buy sneakers, too.

ABDUL-JABBAR: You can't be afraid of losing shoe sales if you're worried about your civil and human rights. You can't be worried about that. (Applause) It's just the way it is. He took commerce over conscience. That's unfortunate for him, but he's got to live with it.

Despite the legend about what Jordan “reportedly” said, he donated to Obama’s Senate campaign in 2004 and hosted a $20,000-a-plate fundraiser for Obama in 2012. ESPN’s LZ Granderson reported that as he continued to dump on Jordan as too callously uninvolved, and NPR didn't find time to note this "exculpatory" information for liberals.

Then Martin wanted to tiptoe around how Abdul-Jabbar, who changed his name from Lew Alcindor in 1971 to embrace his new Muslim faith, dealt with all the Islamophobia in America:

MARTIN: One thing I did want to ask you is you are the first - one of the first people to embrace the Muslim faith that many people will have known. And that was not an easy thing to do at the time, particularly to be in such a public space. How has that - has it changed how you walk in the world, as a Muslim, over the course of time? Have you seen more acceptance? I mean, we've been in a difficult period, obviously, over the last couple of years in this country...

ABDUL-JABBAR: I think there are two sides to it. Prior to 9/11, it more or less went under the radar. I wasn't very political with my faith. I've never tried to be political with it. And then after 9/11, questions were asked. They were legitimate questions. But, you know, the whole idea for me was to have a moral anchor, and it has served as a very excellent one for me. So, you know, I don't have any misgivings about my faith. I am very concerned about the people who claim to be Muslims that are murdering people and creating all this mayhem in the world. That is not what Islam is about, and that should not be what people think of when they think of Muslims. But it's up to all of us to do something about it.

Martin skipped over details like those that appeared later in The New York Times: “Abdul-Jabbar’s ties to a controversial Muslim leader, Hamaas Abdul Khaalis, caused a long rift with his parents. Tragically, a feud between Khaalis and the Nation of Islam led to a massacre at a house that Abdul-Jabbar bought for Khaalis’s sect in Washington.”

(Notice Martin never mentioned any "very retrograde" attitudes that the "religion of peace" has like on the status of women. Islam is treated like something that very special people believe at great personal cost, even multi-millionaires like Kareem.)

Abdul-Jabbar told the Times a Soviet stooge was his role model:

“My role model in this is Paul Robeson,” he said of the athlete, actor, singer and political activist. “If I can be like him, and be multidimensional and competent in more than one area, I’d embrace that.”

The allegation of choosing "commerce over conscience" seems like a lighter accusation than knowingly choosing Soviet tyranny over American liberty, as Robeson did. Martin couldn't even describe the NBA legend as a "liberal."

Instead, it was "Kareem Abdul-Jabbar is also an actor, a best-selling author and an activist since retiring from the game in 1989. He's written several books and become a columnist for Time magazine. Since he was a standout college athlete at UCLA though, Jabbar has been outspoken on issues of race, politics and justice." That's apparently the code for leftist.

He is also one of a handful of influential and respected black men in America who has a national platform as a regular contributing columnist for Time Magazine and The Washington Post, where he shares his thoughts on some of the most socially relevant and politically controversial topics facing our nation today.

In the NPR interview, Martin would only vaguely state they she did the interview at a “live event in DC.” Where in DC? And for what? Kareem's website had the answer: he was the guest at NPR's annual Weekend in Washington event at the National Building Museum, where he was photographed with another lefty star in attendance -- former Attorney General Eric Holder.