The December 23 edition of People magazine looks through old pictures with Barbara Walters as she "looks back on her most memorable moments" in five decades of television interviews.

During her 1977 interview with Fidel Castro "I spent 10 days with him, traveled through the mountains and held his gun in my lap,"  she said. "People thought we had a romance, but we never did." There was no romance with Ronald Reagan: 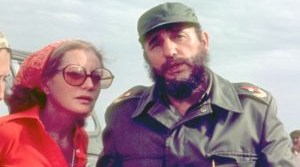 "This was where he got to be a cowboy," she recalled, "but neither Nancy Reagan nor I loved it there. It was very cold, and he had the scroungiest Jeep." Fans of "The Parent Trap" should now imagine Walters clicking together two sticks to ward off the lions.

Walters also had a memorable interview with Castro in 2002,  when she uttered this memorable piece of idiocy: “For Castro, freedom starts with education. And if literacy alone were the yardstick, Cuba would rank as one of the freest nations on Earth. The literacy rate is 96 percent.”

Castro tried to butter her up, as if she needed it: "You don't look like 25 years have passed. You look exactly the same."